How to Het Net?

There has been much written about why Het Nets are needed (running out of capacity) and when it will happen (licensed band small cell centric view of Het Nets). On the other hand, how Het Nets will happen is rarely discussed in the general media. Perhaps this is because this is a very technical discussion that does not attract the attention but for the few engineers and managers directly tasked with making Het Nets work. Or maybe in our world today sound bites are all that matter and nobody has the time to ‘look under the hood.’ Whatever the case, the how of Het Nets is what matter most in the wireless networking ecosystem. Simply put, get it wrong and your are doomed. How Het Nets will happen is pivotal with high implications end-to-end because it is fundamentally based on competing technologies which while it may coexist in some limited circumstances, economics demands a winner to achieve scale.

The concept of Het Nets comprises multiple types of cells to provide wireless services. What these cells are is a matter left for interpretation. For some, the cells include an antenna because it is required to transduce electromagnetic energy between the air and the network. Beyond that anything is open: the cell can run on any frequency over any wireless technology. Consider the following developments as indicators:

1- The evolving definition of small cells: we are a long way from the residential femto cell that started the concept (shall I dare say dream?) of massive small cell deployments. This rather simple concept is now so complex and is especially hard to understand for non-professional insiders well familiar with the technology. Small cells can be implemented as independent cells (different cell ID) or as an extension of the macro cell (same cell ID). They can implement a combination of interference management or mitigation techniques (time or frequency-domain resource management). They can yield to the macro cell the processing of certain functions (e.g. PDCP layer at macro cell). Finally, they can implement different forms of carrier aggregation in conjunction with the macro cell that opens the implementation of small cells to any frequency band: licensed, unlicensed and shared (as being defined in the US in 3.5 GHz band). Implementing small cells is a field in its own – not to mention other technologies we touch upon below. 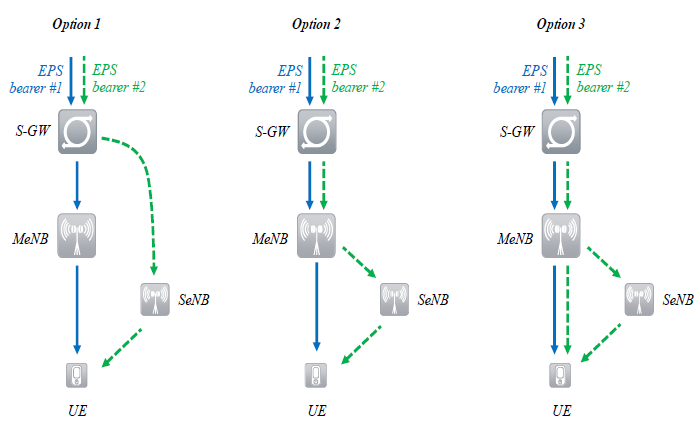 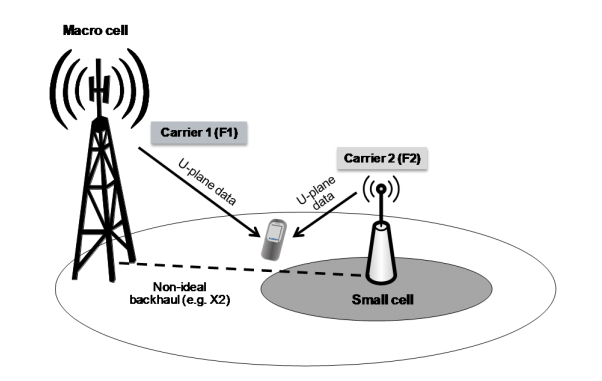 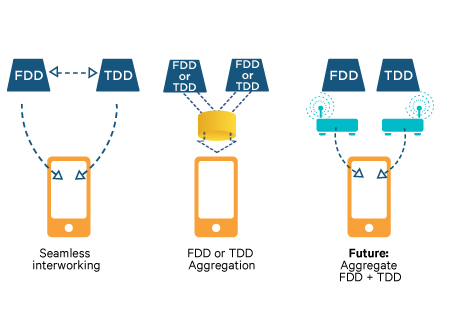 Carrier aggregation can be implemented between small cells and macro cells in different spectrum bands and modes such as 800/900 MHz FDD and supplementary 2.5 or 3.5 GHz TDD.

2- Emergence of centralized solutions and Cloud RAN: a different way to implement Het Nets is to centralize the baseband processing in a central location (distributed radio systems). In this case, the baseband can simply be aggregated in one or more collocated hardware platforms. Alternatively, the baseband processing can be pooled and vitualized using general purpose processors running on COTS servers (Cloud RAN). How to implement CRAN is a whole wide field with different technologies to reduce fronthaul line rate requirements some of which include different split in the LTE protocol stack between the baseband pool and remote radio. 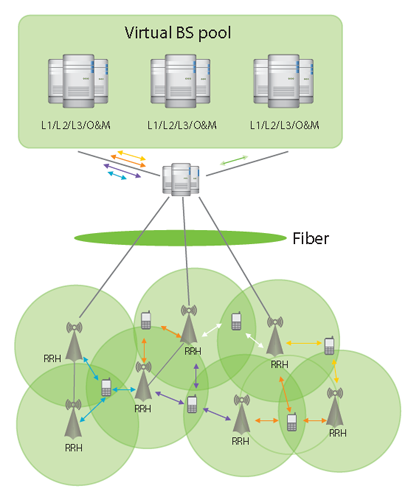 3- The integration of Wi-Fi: Wi-Fi is viewed as an independent technology, but this need not be the case. Today, Wi-Fi involves user interaction with the network (e.g. authentication) which is symptomatic of integration at the upper layers of the protocol stack. But this need not be the case. In fact, the trend is for tighter integration of Wi-Fi into the wireless network which means streamlined and tightly coupled control for Wi-Fi with that of the access network; in other words, integration to encompass much of the higher layers of the protocol stack. Wi-Fi ends up denoting the physical and medium access control layers with more than one way available to merge with higher layers of the LTE protocol stack. Wi-Fi becomes simply a way to access the air interface while the LTE network in full collaboration with user devices contains the intelligence on what should go on Wi-Fi as opposed to LTE. There are enough things to do discuss in this space in standard bodies to last for a couple years! 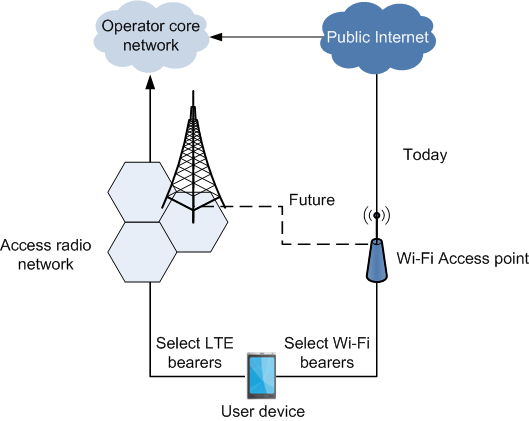 Integration of Wi-Fi and LTE access networks will alter the path of control and data bearers.

4- LTE-U: LTE in unlicensed band is an alternative to using Wi-Fi that has recently been proposed and is in process of being debated in 3GPP standard body. LTE-U is meant for small cells whereby a second channel in the 5 GHz unlicensed band is used to transmit data. As proposed, it requires a primary LTE channel in the licensed band to work; hence it is not a definition of LTE technology in the unlicensed band, although that does not preclude it from happening. This brings certain advantages in efficiency over Wi-Fi integration which has the advantage of being more pragmatic given the proliferation of Wi-Fi and its huge economies of scale advantage. It is easy to imagine a similar proposal in other bands such as shared spectrum bands (3.5 GHz in the US, 2.3 GHz in Europe), or even higher bands such as millimeter wave bands that are mentioned in 5G discussions. 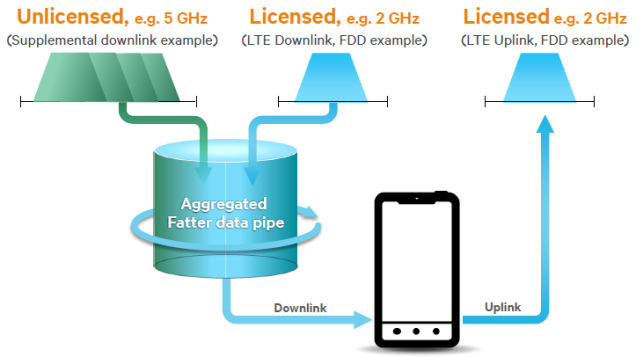 LTE-U as proposed today to include a supplementary downlink channel (Source: Qualcomm)

These are some of the ways to implement Het Nets which essentially call for tighter integration of the higher layers of the protocol stack while leaving the lower layers such as the MAC, PHY and RF more flexible to accommodate different technologies and spectrum bands. (I have not mentioned other traditional techniques such as DAS that have rolled into the Het Net definition: why not as we defined Het Nets to include any type of cell that include an antenna!!). The ‘how’ of Het Nets from this brief overview is not a question to be taken lightly. It is something that will evolve over the next few years and will have high impact the strategy of companies in the ecosystem from those developing silicon for baseband silicon (SoCs, FPGAs, DSPs, NPUs, etc.) to those interested in connecting the cells to the network (i.e. backhaul and fronthaul companies). Those who get it right will have the capacity to disrupt the market and become true game changers. Audaces fortuna iuvat!

Latest Contents
ASR9K Multi-hop BFD resiliency
Created by James Jun on 03-05-2021 03:00 PM
5
0
5
0
When doing multi-hop async BFD sessions on ASR9K, the following restrictions / caveats are noted:1.  HW-offload is not supported2.  LC CPU which hosts the session is randomized according to line cards listed under 'multipath include location X/X... view more
ASR 9000 forwarding latency in 2021
Created by James Jun on 03-05-2021 01:18 PM
0
0
0
0
Hello,In previous post (https://community.cisco.com/t5/xr-os-and-platforms/asr9000-forwarding-latency/td-p/2708349) back in 2015, it was identified that Typhoon to Typhoon forwarding latency on ASR9K is estimated to be around 15usec. Is there such fi... view more
[bng] mac address format change - mac not being used for Aut...
Created by Carlos A. Silva on 03-05-2021 09:14 AM
0
0
0
0
Hi,  My question is regarding the Radius AVpair client-mac-address that is sent to a Radius server as part of the authentication process and accounting. Let me clarify first that we are NOT using the mac-address as part of the username at all. T... view more
On-demand bandwidth
Created by Ryan4699 on 03-05-2021 07:03 AM
0
0
0
0
Hi, Guys, I wonder what the on-demand bandwidth utilization workflow is...Appreciate!
disable prompt destination file name when copy file cisco i...
Created by lab-jkt on 03-05-2021 01:38 AM
0
5
0
5
Hallo  on ios-xr is possible or not when we wan to disable prompt "Destination file name (control-c to abort): "  when copy file cisco ios-xr to usb like file prompt quiet on ciso ios ? Thank you for help
CreatePlease login to create content
Discussion
Blog
Document
Project Story
Video
Related Content
Discussions
Blogs
Documents
Events
Videos
Project Gallery
Content for Community-Ad