One Person’s Thoughts from the LTE World Summit 2013

I have just returned from beautiful Amsterdam having attended the two-day LTE World Summit at the RAI Convention Center.  Cisco was a Gold Partner this year and had four different Speakers on presentations and panel sessions.  While the summit had booths and meeting rooms, the real draws were these keynotes and panel sessions.  Keynote speakers included Dr. Byun, CTO of SK Telecom, talking about VoLTE.  Mr. Scarse, CTO for ETSI covered 3GPP Release 12 updates, small cells and spectrum usage (and re-usage).  Other speakers presented views on LTE rollouts and issues in various countries.

There were several informational tracks for the panel sessions including:

What I heard from the discussions was that LTE was progressing fast in North America (particularly USA) and parts of Asia (particularly South Korea and Japan).  However, LTE was not being implement with great urgency in Europe and the economic realities were pointed out as the major reason behind this lag.

VoLTE was a big topic this year and the question of how this was being marketed in different countries. For example, several carriers plan to market VoLTE as HD Voice while a few simply see VoLTE as a way to move voice onto a new platform and being able to then decommission old technology and in some case to re-farm spectrum used by older technology to LTE.

International roaming was covered and the challenge of aligning and providing the spectrum and bands. Additionally the need for the device manufactures to offer mobile devices that support enough of these various bands to enable international LTE roaming.

One message that came across very clearly was that most (if not all) the industry understands that the solution is not a single radio access technology, but rather a hybrid of LTE, LTE-Advanced and SP WI-Fi.  Additionally, there is general agreement that coverage requires a blend of Macro and Small Cell.  SON will be required to make this all a reality.  We made certain that everyone we spoke with understood that only Cisco provided the automated SON that could deliver on a true Hybrid HetNet radio environment.  We received no argument on that point.

As I noted before, Cisco brought four speakers to this event which demonstrates that 3GPP and others see Cisco as a leader in the industry and with valuable knowledge that needs to be shared.

The topics and speakers included:

Dan Kurschner, on a panel that addressed “How is Mobile Video Challenging the Network Architecture of LTE? Mitigating the Bandwidth Hogger”

In my panel the host opened with a statement and directed questions to each of the panelists.  I shared VNI data to frame the discussion pointing out that we anticipate Video to represent 66% of all Mobile Data, with the average user consuming 2 GB/Mo (a 10X growth factor) by 2017.  I also pointed out that of that M2M will represent 5.1% of that mobile video traffic.  Additionally I spoke about the need for Service Providers to take an architectural approach as they re-tool their networks for LTE and the need for both an intelligent hybrid network with small cells and SON and the requirement of Elasticity in that network.  In short, Mobile Service Providers need to design for the unpredictable nature of traffic demands and ensuring they have to elasticity to respond to the unexpected which is sure to come.

I was fortunate to be able to attend the presentations of Akram Awad and Brian Meaney.  Akram had a brilliant presentation about the radio access challenges facing Service Providers and realistic solutions to these problems.  Akram’s presentation took a large, complex issue and broke it down in a series of manageable questions and challenges that could all be addressed. 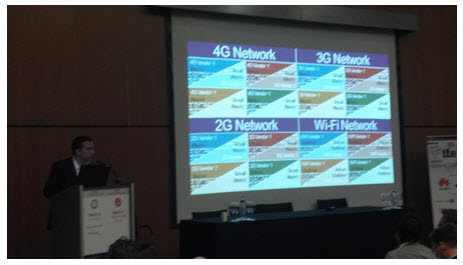 Brian Meaney was exceptional as he took on the “Hot buzzword” of the year (SDN and NFV) and clearly separated myth from fact.  He went on to explain the value of virtualization in the network and what should logically be addressed in the initial implementations and what will need time to see what develops. 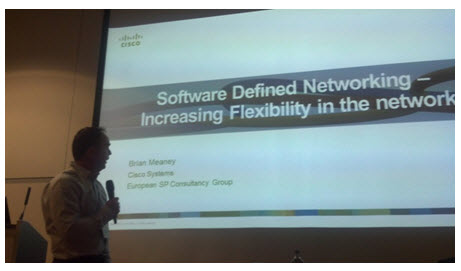 The LTE World Summit is not so much about big customer meetings (we have MWC and CES for that) but the presentations and panel sessions are very interesting and valuable indeed.  Having said that, we did have the opportunity to meet with some key customers and also enjoy interesting discussions with industry analysts.  Amsterdam offered a lovely setting and it was a real treat walking past the canals to and from the event location each day.

Latest Contents
Understanding gNMI on IOS-XR with Python
Created by Bruno De Oliveira Novais on 01-19-2020 01:28 PM
0
0
0
0
IntroductiongRPC Terminology and InstallationRouter configurationCodingCertificate and credentialsSending a GetRequestPolling Operational DataPolling Configuration DataChanging Configuration Introduction While gNMI is fairly new, it's becoming more and m... view more
How do I use "match input-interface" in IOS XR (QoS bandwidt...
Created by gnk195133 on 01-17-2020 06:16 PM
3
0
3
0
I want to limit downstream internet bandwidth for each customer. But need separate inter and domestic traffic.And within a customer, all hosts will be share bandwidth together.  Everything looks good in my lab with this configuration below becau... view more
Problems with A99-8X100GE-TR and IOS XR 6.5.3
Created by nesttech1 on 01-17-2020 11:32 AM
1
0
1
0
We are migrating some of these A99-8X100GE-TR modules to the smaller ASR-9904 platform and running A9K-RSP880 and IOS 6.5.3.  When the module installed, some messages come up requiring the FPD upgrade and following the FPD upgrade new errors appear.&... view more
IOS XR Strange MTU on Bundle-Ethernet members
Created by alain_richard on 01-17-2020 03:31 AM
7
0
7
0
Hi, In order to get a usable MTU of 9198, I declare the mtu 9212 on a bundle-ether port (9198+14). The configuration is following : RP/0/RSP0/CPU0:rtr1#sh run int be1interface Bundle-Ether1 mtu 9212 RP/0/RSP0/CPU0:rtr1#sh run int ... view more
Multi-VRF Load Balance can be possible?
Created by mhiyoshi on 01-16-2020 10:53 AM
9
0
9
0
Dear all, Currently I am tackling with the following topology.Based on this, it is pingable between R3 and R2 Global route through MP-BGP based multi-VRF, however I am curious about actually which VRF (VRF-A or VRF-B) can be selected on thi... view more
CreatePlease login to create content
Discussion
Blog
Document
Video
Related Content
Discussions
Blogs
Documents
Events
Videos
Content for Community-Ad
FusionCharts will render here
This widget could not be displayed.