Should Small Cells Be Deployed In Their Own Spectrum Band?

Small cells raise a number of practical implementation questions which are yet to be resolved. One such question is whether small cells should operate in the same frequency band as the macrocell layer (co-channel deployment), or on a different frequency band. The question has profound implications to operators, vendors, and to regulators alike.

To clarify, recall that in co-channel small cell operation interference between the macrocell and small cell layers limit the capacity gain of small cells. The benefit from small cells is realized when they are placed in traffic hot spots whose location must be identified (which is a challenge in itself). As LTE technology matures with advanced releases, techniques such as 'Almost Blank Frame' are introduced to manage interference whereby a layer temporarily ceases operation to reduce interference to the second layer as shown in Figure 1. These techniques largely trade off some capacity for lower interference (but not network capacity: network capacity would still increase because small cells are added).  Using a different frequency band for small cells provides yet higher capacity because the different layers are separate networks.

There are tradeoffs to be considered for either co-channel or multi-band deployments. Co-channel small cell implementation adds complexity on the network side resulting from the implementation of interference management technologies. It requires a more complex optimization process by the operator and eventually the implementation of advanced SON techniques. Alternatively, multi-band implementation involves higher complexity on the RF chain, specifically on the handset side which has to integrate additional frequency bands. While this may seem daunting at first glance considering the number of bands in play, recent advances in RFIC's and RF frontend technologies are enabling ever greater number of bands to be aggregated in a single device (at this year's MWC, devices supporting 5 access modes and 12 bands were on display).

The major question in multi-band deployments becomes that of spectrum: which bands to use for small cell deployments? The consensus from a technical perspective is to use frequencies in the 2.6 and 3.5 GHz bands (designated for IMT-Advanced by the ITU). The propagation loss characteristics of these bands make them amenable for high frequency reuse that enables dense small cell deployments. The amount of available spectrum in these bands fares well for broadband quality.

But there are also practical reasons to advocate the deployment of small cells in the 2.6 and 3.5 GHz bands. The 2.6 GHz band is widely available throughout the world, most notably held by China Mobile, Clearwire in the US, and Softbank in Japan, while in Europe a series of auctions in the last three years put as much as 190 MHz of spectrum in the hands of operators. The 3.5 GHz has been licensed in the early to mid-2000s in Europe and several countries around the world, mainly for fixed wireless access, a business model that did not succeed. In many instances this spectrum is idle and can be purchased at relatively low price. Given the IMT-Advanced designation for this band, regulators should be encouraged to allow mobility services. For example, the regulator in Japan undertook the action to re-farm the 3.5 GHz band by moving STL video (Studio to Transmitter Link) services with a target commercial schedule of 2015. The intended application: LTE-Advanced performance with small cell deployment and off-load capabilities of macrocell layer.

In the United States, new grounds are broken with the FCC & NTIA earmarking the 3.5 GHz band for spectrum sharing techniques between primary Federal users and secondary commercial users. While the full scope of spectrum sharing is still to be worked out, small cells are cited as one of the main applications. Given that traffic on small cells is highly temporal with short periods of concentrated activity followed by long periods of inactivity, it makes sense to deploy small cells on low cost spectrum on a shared basis.

Spectrum pricing of the 2.6 and 3.5 GHz bands, being at a fraction of what it is for prime sub 1 GHz spectrum, supports small cell deployments as shown in Figure 2. European auctions firmly priced the 2.6 GHz spectrum in the range between 2-10 eurocents per MHz per capita in comparison to 50-80 eurocents for prime 800 MHz digital dividend spectrum. 3.5 GHz spectrum is priced much lower, at a cent or a fraction thereof per MHz per capita, further supporting a small cells business case. 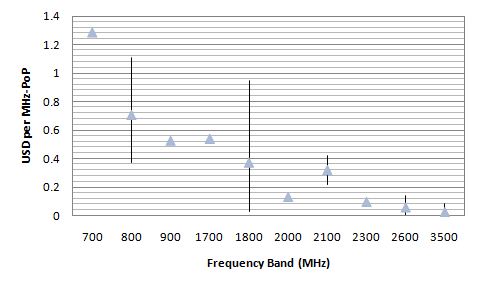 Figure 2 Cost of spectrum for select access bands. Small cell candidate bands, 2.5 and 3.5 GHz, are priced at a large discount.

Deploying small cell technologies is a multi-faceted question which strategic consequence to operators, especially as it involves spectrum assets. It has the potential to be a strong competitive differentiator between carriers for the capacity provided by small cells can rarely be matched by macrocells. Network operators would have to plan their small cell strategy in an integrative manner, not only with an eye on technology evolution but also on the spectrum position. As it happens, the answers to the complex questions small cell deployments raise can only be answered by looking at the specific case and weighing the alternatives. But it is fair to conclude that the trend for smaller base stations and operation in higher spectrum bands is unstoppable.

Latest Contents
workflow for On-Demand bandwidth utilization
Created by Ryan4699 on 03-04-2021 07:54 AM
0
0
0
0
MPLS TE auto tunnel mesh
Created by saif on 03-04-2021 01:47 AM
0
0
0
0
dears  kindly, i know mpls auto tunnel mesh is used to automatic configured full mesh of mpls TE tunnel to aviod lack in transport labelwhich cause traffic block holes but how is configured & what is condition to implemnent that from from IO... view more
Does SR-TE policy have a path protection function?
Created by Soushi Takata on 03-03-2021 02:51 PM
2
0
2
0
Thanks for any insight. I want to move from RSVP-TE to SR-TE policy.The RSVP-TE environment uses the path protection function.I would like to use the path protection feature in the SR-TE policy environment as well.But I could not find any such featur... view more
mpls TE forwarding adjacency using issue ..
Created by saif on 03-03-2021 08:29 AM
4
0
4
0
Dear collogues: kindly ,  I am new in dealing with mpls traffic engineering : i wonder 1.what is the benefit of advertising tunnel as P2P link with cost 1000 in ospf data base  via forwarding adjacency if  core routers not used it... view more
Show installed Service Pack on IOS XR with NCS platform
Created by AlexRasmussen on 03-01-2021 07:03 AM
1
0
1
0
Hi all! Does anyone know an easy and quick way to show the installed Service Pack level on IOS XR for the NCS platform? I know I can compare the packages within the Service Pack TAR archive file and the output of the command: "(admin) show insta... view more
CreatePlease login to create content
Discussion
Blog
Document
Project Story
Video
Related Content
Discussions
Blogs
Documents
Events
Videos
Project Gallery
Content for Community-Ad