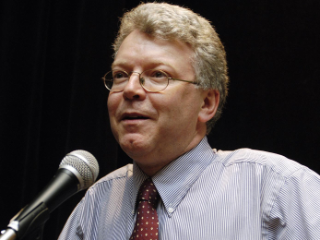 Why is everyone except me making money off my mobile network?

Let me tell you my story about Steve. Well, he wasn't alone.  He had accomplices......Chad Hurley and Jawed Karim were there too.  Perhaps I could have fought off all three, but then Larry Page and Sergey Brin showed up, and that was too much.  What did they want to gang up on me for?  After all, they're all billionaires.

So I was running my little wireless company, and things were going just fine.  Sure, we were having to expand some as people started to actually use all that 3G data stuff, but it wasn't bad.  Just a few emails here and there, and the occasional MMS video.  But very few of my customers even knew what MMS was, and they did use a lot of voice minutes.

Then came the iPhone.  Oh, I forgot to mention Steve Jobs, but he wasn't really one of the gang, he just looked on and smirked a bit.  He made the smartphone a reality, and then doubled down with the iPad.  Now 25% of all my subscribers have a smartphone, or a tablet, or even a smartphone AND a tablet, and they consume data like it's going bad tomorrow.  And over half of it's video, which is really stressing my backhaul - I'm having to replace all my T1's with Ethernet and wireless, do you know?  Next it'll be fiber!  Sheesh!

So who's making the money?  Yes, it's those guys - the one's at YouTube and Google, and other places.  They're getting a free ride running over the top of my network, and I'm the one who's going to have to build more cell-sites, expand my backhaul, and try and find a way to pay for it all.

And now this: "Mobile Network Operator Revenues to Exceed $1 trillion by 2016, but Rising Costs Threaten Profitability, Juniper Research warns".  Do they think I don't know already?  Here, you can read it for yourself, and make your own decision: http://juniperresearch.com/viewpressrelease.php?pr=245

We're going to have to do something about all this free video.  You know, it's fair and OK that my subscribers want to watch video on my network, but somehow it has to be paid for.  And perhaps there's clever things my network guys can do to reduce the impact, and even help me find ways to offer better service and charge a premium.  Optimizing, monetizing and offloading, that'll help immensely.  Isn't there something called Mobile Videoscape? Perhaps then I can keep my lunch money next week.

Latest Contents
ASR9K 32-bit 6.4.2 1000BaseSX Negotiate Auto
Created by philclemens1835 on 05-06-2021 01:20 PM
0
0
0
0
We have a number of situations where we are interfacing with CE's using 1000BaseSX (both SFP-GE-S and GLC-SX-MMD).  It's not the case every time, but there also doesn't appear to be much of a pattern.  I'm curious as to why this command would be... view more
Cisco NSO Service re-deploy
Created by Ryan4699 on 05-05-2021 07:56 PM
0
0
0
0
Hi, Guys, I'm a beginer with NSO, and now i want to re-deploy a service to fix the broken configs, but i can't remove any other out-of-band configs that have been made to the device, what command or step i should do to implement this? Any help w... view more
Multicast VRF
Created by vin.marco on 05-03-2021 02:29 AM
3
5
3
5
Hello everybodyI have a problem implementing Multicast in a small provider with some VRFs.Attached is a diagram that can be used to better understand the typology.  As you can see we have two types of routers R1 is an XR and R2 is an xe, in both... view more
Downgrading IOS XR on ASR1001-X
Created by PK99 on 05-02-2021 10:46 AM
4
0
4
0
Is there a link on proper way to downgrade the IOS on ASR 1001-X?  Currently one unit is on 17.x.  I know the simple way would be to wipe flash and reinstall IOS 16.x but we have licenses on the ASR1001-X that we need to preserve. &nbs... view more
EVPN IRB A/A Does not support BVI shutdown on single PE
Created by nkarpysh on 04-30-2021 12:01 PM
0
0
0
0
Introduction In EVPN A/A + IRB both PE in same EVI have BVI playing a default GW role. Its not supported to have BVI to be shutdown on one of PEs, In this case if if traffic hit this PE with DMAc equal to BVI Custom MAC, then it will drop this traffic du... view more
Create ContentLogin to create content
Question or Discussion
Blog
Document
Project Story
Video
Related Content
Discussions
Blogs
Documents
Events
Videos
Project Gallery
Content for Community-Ad