The Birth of the Mobile Phone 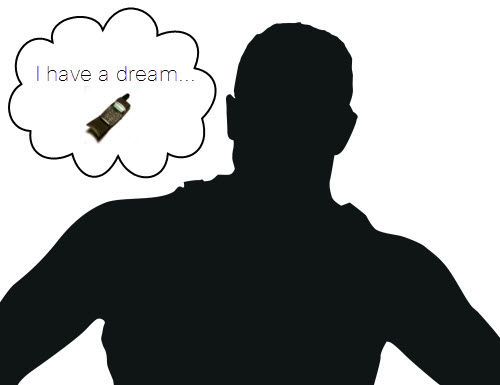 With MLK Jr. Day  this month, it got me thinking of his famous I Have a Dream speech, which I very much treasure, made in 1963. The only thing this time, being a fan of mobility, I decided to finish off that sentence with "... to one day have a mobile phone!". Imagining the times before mobile phones were invented, I couldn't help but wonder who exactly had this dream of the possibility of mobile phones? I fully admit I would not have that genius thought back when it was developing and I would have most likely resorted to the classic two can, one string of yarn method as a solution to my communication problem- very ineffective I must say.

As I thought of this question about the birth of the mobile phone, I decided to do some research and discovered "the first hand-held mobile phone was demonstrated by Dr. Martin Cooper, an engineer form Chicago, Illinois and now 83 years old, in 1973, using a handset weighing around 1 kg". Cooper is considered to be the inventor of the first mobile phone for handheld use and after his initial testing in Washington for the F.C.C. he took the phone technology to New York to show the public. I guess we can say the rest is history! Thank you Dr. Martin Cooper for the birth of the mobile phone - its been a lifestyle changer and proved it from 1990 to 2010 alone, when worldwide mobile phone subscriptions grew from 12.4 million to over 4.6 billion. Who would have thought the development of mobile phones would have come to be what it is today with features such as apps, cameras and touch screens? Still amazed and still grateful.

If the story of the birth of the mobile phone interest you, watch this video with Dr. Steven Shepard featuring stories of the pioneers of the telecom network, including the transatlantic cable in 1858.

Look forward to more blog posts relating the two things I love: Technology and the Holidays.

February 2012 The Latest Gadgets: Determining Factors in the Rules of Attraction

Latest Contents
A9K-8X100GE-TR RATE LIMITED
Created by PK99 on 02-26-2021 05:19 AM
1
0
1
0
On ASR-9904 Chassis with RSP5-SE.  I was under the impression that the RSP - Chassis combo could support 1.8T per line card.  However, when a A9K-8X100GE-TR is inserted, I get RATE LIMITED message. %FABRIC-FIA-1-RATE_LIMITER_ON : Set|fialc[... view more
IOS XRv 9000 - PCE/PCC Policy Down
Created by loris.marcellini on 02-25-2021 03:57 PM
1
0
1
0
Hey folks, I am trying to configure an intra-domain PCE/PCC setup with headend initiated ODN policy. It looks like PCEP is up and report messages gets delivered to the PCE, however it looks like the update messages aren't there and the ERO from PCC to PCE... view more
SRMS - Mapping Prefixes between ISIS and OSPF
Created by loris.marcellini on 02-23-2021 04:57 PM
3
5
3
5
Hey folks, backgroundI am merging two ASes, AS100 and AS300. AS100 runs ISIS level-2-only and has SR enabled. AS300 runs ospf and ospfv3 and has LDP enabled. I have interconnected iosxr-9k-3 in AS100 to iosxrv-5 AS300 using a physical link and r... view more
UCM Phone Profile Transfer to Different Device Type
Created by MatMR on 02-23-2021 01:20 PM
0
0
0
0
I routinely have to lifecycle 50+ from a site. One of the longest parts of this process is documenting and transferring specifics onto the new phone profile IE. Extension, Identifying name, ECT.Is there anyway to transfer a phone profile to a different ty... view more
Disk space not sufficient for rpm installation on NCS5501-SE
Created by filopeter on 02-23-2021 01:24 AM
5
0
5
0
Hello,during SMU installation on NCS5501-SE, IOS XR 7.1.2 I almost run out of a disk space. Here is the warning%HA-HA_WD-3-DISK_ALARM_ALERT : A monitored device / ( rootfs:/ ) is above 80% utilization. Current utilization = 85. Please remove unwanted user... view more
CreatePlease login to create content
Discussion
Blog
Document
Project Story
Video
Related Content
Discussions
Blogs
Documents
Events
Videos
Project Gallery
Content for Community-Ad