Heterogeneous networks (HetNets) consist of large (macro) cells with high transmit power (typically 5 W – 40 W) and small cells with low transmit power (typically 100 mW – 2 W). The small cells are distributed beneath the large cells and can run on the same frequency as the large cell (co-channel), or on a different frequency. As an evolution of the cellular architecture, HetNets and small cells have gained much attention as a technique to increase mobile network capacity and are today one of the hot topics in the wireless industry. Many of the initial deployments of small cells are of the co-channel type. Standards such as LTE have focused on incorporating techniques to improve the performance of co-channel deployments in earlier releases of the technology standard leaving the handling of multi-frequency deployment type to later releases. In all, operators today have multiple options of small cell deployment scenarios, operational techniques and technology roadmaps to choose from. 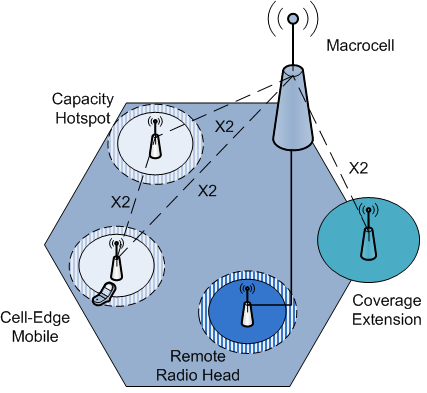 To illustrate some of the deployment issues related to small cells, I will provide in this article a qualitative review of small cell performance and explore their impact on the operator's small cells deployment strategy. The focus is on co-channel deployments which aside from being common in this early stage of HetNet evolution, they provide for a complex radio frequency environment.

Throughput Performance: The overall throughput experienced by users on both downlink (base station to the mobile subscriber) and uplink (mobile to base station) paths will generally increase as small cells are deployed. This applies to both users camped on the macro cell and those on the small cells, but for different reasons:

If the mobile subscribers are uniformly distributed over the coverage area, then the likelihood a user will experience a certain level of throughput is approximately similar as the number of small cells increases. But in reality, the distribution of users is not uniform as they tend to concentrate in certain "traffic hotspots." In this case, a small cell in a traffic hotspot is expected to provide lower throughput than a small cell in a uniform user distribution area. In the meantime, a user on the macrocell will experience a more pronounced increase in throughput because a higher proportion of users are offloaded from the macro cell. As even more small cells are added, interference will increase leading to successively diminishing marginal increase in throughput.

This last note is an important one: small cells are beneficial up to a point. The user experience will be affected by the density of small cells with a diminishing marginal return followed by actual degradation of service as the number of small cells exceeds a certain threshold. When this threshold is reached depends on a number of factors that include the type of technology, morphology, and cell density and distribution. Inter-small cell interference is one factor that limits small cell performance. Another factor is that as we add more small cells, we create more 'cell-edge' regions within the coverage area of macrocells that can also limit performance as I will expand upon below.

Nevertheless, the key take away here is this: it pays to find out where the traffic hot spots are as otherwise, the gain achieved from small cells will be small. Small cell deployment would have to be 'surgical' in select areas to achieve the maximum return on investment.

There are other potential interference scenarios in addition to those described here. But the basic fact is that the actual performance and benefit of small cells will vary, and will do so more widely in the absence of interference mitigation/performance enhancing techniques. This is one reason why some requirements for small cell deployments have been hotly debated, without a firm resolution. For example, a basic requirement is that of small cell backhaul capacity: what should it be? Should the backhaul link be designed to handle the peak throughput rate, which is a function technology, or the average throughput rate which is much harder to ascertain and put a value on because it depends on many factors related to the deployment scenario?

Based on the above description, we know that throughput of small cells will depend largely on the load. The more clustered the subscribers, the lower the overall small cell throughput. On the other hand, if there's a light load (few users), then the capacity will be high. If you are an operator, you sure would need to think carefully about the required backhaul capacity! And while we're on the backhaul topic, let's not forget that we also need to make sure that backhaul on the macrocell is dimensioned properly to support higher traffic load which will certainly come as more small cells are deployed.

In this post, I went through some aspects of small cell performance.  These problems are well recognized and certain techniques are being developed and integrated into the standards to address them. This raises other important questions to the operator's strategic network planning process, such as: what interference management and performance enhancement features should be considered? And, what is the technology roadmap for these features? I will expand more on some of these techniques in a future blog post.

Insightful, although I probably wouldn't know if  it wasn't. We are presently working on a  project  in this field and I  am sure, along with myself, many will find your article  timely and valuable for their own work and knowledge . Can I ask what area/BU you are working in this field?

Ray, small cells are a very hot topic in wireless today and would continue to be as long as data services continue to grow. I have worked to define backhaul solutions for small cells, and currently consult in this field. You can refer to my site at http://frankrayal.com for more information.

Latest Contents
workflow for On-Demand bandwidth utilization
Created by Ryan4699 on 03-04-2021 07:54 AM
0
0
0
0
MPLS TE auto tunnel mesh
Created by saif on 03-04-2021 01:47 AM
0
0
0
0
dears  kindly, i know mpls auto tunnel mesh is used to automatic configured full mesh of mpls TE tunnel to aviod lack in transport labelwhich cause traffic block holes but how is configured & what is condition to implemnent that from from IO... view more
Does SR-TE policy have a path protection function?
Created by Soushi Takata on 03-03-2021 02:51 PM
1
0
1
0
Thanks for any insight. I want to move from RSVP-TE to SR-TE policy.The RSVP-TE environment uses the path protection function.I would like to use the path protection feature in the SR-TE policy environment as well.But I could not find any such featur... view more
mpls TE forwarding adjacency using issue ..
Created by saif on 03-03-2021 08:29 AM
4
0
4
0
Dear collogues: kindly ,  I am new in dealing with mpls traffic engineering : i wonder 1.what is the benefit of advertising tunnel as P2P link with cost 1000 in ospf data base  via forwarding adjacency if  core routers not used it... view more
Show installed Service Pack on IOS XR with NCS platform
Created by AlexRasmussen on 03-01-2021 07:03 AM
1
0
1
0
Hi all! Does anyone know an easy and quick way to show the installed Service Pack level on IOS XR for the NCS platform? I know I can compare the packages within the Service Pack TAR archive file and the output of the command: "(admin) show insta... view more
CreatePlease login to create content
Discussion
Blog
Document
Project Story
Video
Related Content
Discussions
Blogs
Documents
Events
Videos
Project Gallery
Content for Community-Ad