In my earlier blog post, The Hype & Reality of Small Cells Performance, I provided a qualitative review of small cell performance and discussed interference scenarios that limit performance. Perhaps the most defining problem of small cell deployments is the large transmit power imbalance between the macrocell and the small cell (~20-30 dB) which increases the potential of uplink and downlink interference thereby limiting the 'cell-splitting gain.' As interference is the culprit in limiting performance, so managing it is at the crux of advanced LTE techniques. Fortunately, the LTE physical layer provides many levers to manage interference. Let's recall that LTE is based on orthogonal division multiple access technology (OFDM) where orthogonal sub-carriers divide a wide channel bandwidth into multiple narrow frequency bands. Data is scheduled on sub-carriers which are assigned to users in the frequency and time domains (the basic unit of assigned sub-carriers is called a Resource Block). As we shall see, many of the interference management techniques are related to how the network assigns and manages its resources. But before we get into this, let's have a look at range expansion which is a fundamental aspect of small cell deployments.

Range expansion, as shown in Figure 1, enlarges the coverage area of the small cell and allows it to capture more traffic. It optimizes the resources of the network, reduces handovers, and increases network throughput. But it has a key drawback: mobiles handed over to the small cell are likely to experience high interference from the macro cell. In LTE Release 8, cell selection is based on downlink received signal strength which results in much smaller downlink coverage than uplink coverage because of the large power imbalance mentioned above. The range of small cell is expanded by implementing a selection offset or handover threshold in favor of the small cell. Release 8 range expansion is limited to the order of a few dBs (~3-4 dB gain). Later LTE releases focus on techniques that enable greater expansion of small cell range (up to 25 dB, but practically ~9 dB gain). In Release 10 the cell selection process is based on minimum path loss and important techniques are introduced to manage expansion zone interference. These techniques are crucial to scale small cell deployments so I will review two fundamental ones here. 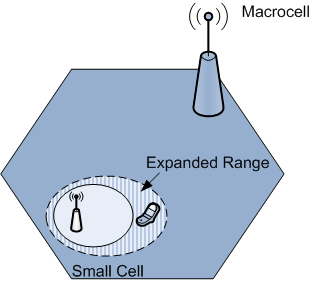 Inter-Cell Interference Coordination (ICIC)/enhanced ICIC (eICIC): ICIC is a broad technique to manage network interference by assigning resource blocks in a manner that reduces the chance of overlap. LTE Release 8 supports only non-overlapping transmissions in the frequency domain – base stations will be able to communicate over the X2 interface which downlink and uplink Resource Blocks are liable to high interference in addition to flagging high uplink interference to their neighbors, hence, ICIC is limited to data channels and does not apply to control channels. While R8/9 ICIC works well for homogeneous networks, it falls short of providing significant gain in a heterogeneous network (HetNet) architecture because it limits range expansion as it applies only to data channels and not to control channels where interference can remain significant.

Release 10 introduces a number of features to improve ICIC performance and further expand the range of the small cell. Two main features include scheduling across multiple frequency carriers and time-domain multiplexing where the macro cell and small cell operate on the same frequency. Each of these techniques includes a number of variants that have different deployment requirements and result in different gains. To support such techniques, Release 10 upgrades the X2 interface with additional messages.

Carrier Aggregation (CA): The idea here is to divide the spectrum into two parts to be used by the macro cell and small cell, each of which uses its part of the spectrum to transmit its control channels to avoid interference. The standard allows each cell layer to use either part of the spectrum to communicate with the mobile through a fast cross-carrier scheduling process.  The mobile unit must support Release 10 features to take advantage of this technique.

Implementation of carrier aggregation can take on several forms. For instance, there's the choice of intra-band CA where both carriers are in the same band and are either contiguous (lowest complexity and flexibility) or non-contiguous, and inter-band CA where the two carriers can be in two completely different bands (highest complexity and flexibility option). Evolution of Carrier Aggregation also allows for un-symmetric allocation of carriers which allows for instance higher downlink bandwidth.

Time-Domain Multiplexing (TDM): While carrier aggregation aims at isolating interference by segmenting spectrum, TDM techniques are targeted at using the same frequency channel on all layers of the HetNet while leveraging the time domain to manage interference between the layers.

TDM techniques feature the capability to suppress transmissions in certain sub-frames of the aggressor base station. This reduces interference and allows the victim base station to schedule transmissions during these quiet sub-frames. However, transmission suppression is incomplete; rather some control signaling will continue to be broadcast for backward compatibility. So, this technique is referred to as 'Almost Blank Subframe' (ABS) and will take full form in LTE Release 11 when mobiles will be able to apply interference suppression to better receive control signaling from the victim (low-power) base station. ABS results in a base station losing capacity, but this is acceptable as ABS allows more small cells to be deployed.

The victim base station needs to recognize which mobile units are subject to interference and schedule them during an ABS zone while mobiles closer to the cell center can be scheduled on normal sub-frames.  The mobiles participate in this process by sending channel measurements reports to the base station per the ABS patterns of the base station (in other words, mobiles need to support these features as otherwise performance would be poor).

The introduction of interference management techniques to accommodate HetNet deployments requires further enhancements to other aspects of the LTE network. In particular, the X2 interface which is used for communication between base stations is upgraded in Release 10 and future releases to accommodate messaging for dynamic coordination of base station resources. Still, there are no guarantees on the behavior of multi-vendor HetNets. Also, there are different requirements on the tolerances (for example, latency and jitter requirements) of the X2 interface which depends on the mode of small cell deployment.

The quest to realize HetNet deployments does not stop at defining interference management techniques but also extend to include important capabilities such as self-organizing network techniques to facilitate the network management and optimize performance. LTE standards provide a number of options, each with its own advantages and merits. It comes down to actual implementation given the particular deployment scenario, spectrum assets, and market objectives of the operator to decide which technique is most suitable.

Latest Contents
Urgent priority on a ! pattern
Created by helloguys on 09-26-2020 02:35 PM
0
0
0
0
I understand what "urgent priority" does.  I also understand what ! does in a route pattern.  But when they were put together, I'm confused.! is usually used on variable length dial strings, e.g. international dialing.  CallManager usually ... view more
End-point EVC interface Bundle-Ether
Created by Landry Hermann SAMBA on 09-25-2020 08:42 AM
0
0
0
0
Hi all;I have a carrier network with NCS 5501, we deliver L2VPN service to customers, how can I configure NCS 5501 UNI interface which is Bundle-Ether interface to process LACP PDU locally ?Note that for my service, customer promise equipement (CPE) conne... view more
NTP synchronization lost frequently - IOS XR
Created by simone.c on 09-25-2020 01:57 AM
0
0
0
0
Hi all,on all our new ASR9k we are observing a loss of NTP synchronization. We have many IOS devices which do not show this issue, so obviously it is not a network problem as the NTP servers are the same for all  devices (internal server). I see... view more
Understanding Cisco licensing
Created by bealefay on 09-24-2020 01:51 AM
1
0
1
0
So I picked up a used 2911 to replace my aging 3825 that I use for home router and intercom system via low end cisco 69xx voip phones. Was hoping the newer unit, advertised with CME 12, would let me maybe upgrade my phones to something more colorful.Note:... view more
Tidal Enterprise Scheduler - Job Best Practices
Created by KBishnupuri on 09-23-2020 08:44 AM
0
0
0
0
Hello, Community, How do you guys number your jobs in Tidal based on dependency flow? ie.01.JobA02.JobB03.JobCorP10.JobAP20.JobBP30.JobCor010.JobA020.JobB030.JobCor005.JobA010.JobB015.JobC
CreatePlease login to create content
Discussion
Blog
Document
Project
Video
Related Content
Discussions
Blogs
Documents
Events
Videos
Projects
Content for Community-Ad