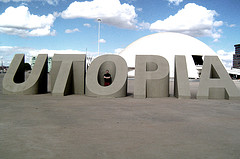 Utopia: the definition brings about visions of an “ideal place or state”, or “a system of political and social perfection.” Thus became the name chosen for a consortium of sixteen Utah cities building their own broadband infrastructure with a fiber-to-the-premise architecture, while offering residents a clear and alternative choice to incumbent operators, including Quest and Comcast.  Is it perfection or fantasy?

UTOPIA, billed as providing light-speed to your door while connecting you with friends, family, entertainment, businesses, healthcare, and education, highlights itself as being part of your home, not owned by any network provider. It is unique in that UTOPIA is part of a combined network owned by connected cities, and therefore citizens of each community. It allows any network provider to use the infrastructure to offer related consumers services in an effort to create more competition within the broadband universe, and to provide rural residents state of the art fiber connections to their homes.

• Maintained by city employees, UTOPIA requires a deposit to participate just as citizens would pay for a sewer connection to their home

• A monthly service fee is charged to maintain the system which includes maintenance, and billing just as with electric, water & sewer services

Currently with eleven listed service providers using the network, UTOPIA is offering a variety of services to residents within its service area. In the past two years since hiring new management, subscriber growth has doubled from previous levels beginning from 2002. UTOPIA indicates a need to add another twenty thousand customers quickly to ensure the long-term viability of the consortiums investment.

This venture is similar to what Google has committed to accomplish with its advertised foray into the broadband infrastructure arena touting network speeds one-hundred times faster than those typically offered today. Goggle will also operate an (open access network) allowing multiple service providers to offer subscribers a wide variety of enhanced applications and services. See (Think big with a gig: Our experimental fiber network)

Historically, Cable operators have chosen the hybrid-fiber coax architecture to build out their networks, with Docsis 3, and GPON to gain efficiencies in bandwidth. Others like Verizon, UTOPIA, and now Google have opted to use fiber-to-the-premise, a total fiber network to connect customers to a true high-powered and hefty bandwidth architecture, which can offer deep access to both existing and future applications.

UTOPIA, Verizon, and Google’s networks will have to be proven profitable both in the short and long-term to be considered viable alternatives in private industry adoption. The heavy capital expenditures on the front end for fiber-to-the-premise construction must be coupled with robust adoption by customers to not only reach a break-even cash flow standpoint, but go on to make a reasonable profit.

This will be critical in obtaining needed capital for companies going forward, where UTOPIA is using bond issues along with pre-paid deposits and long-term subscription agreements to fund its venture. There is no doubt that fiber-to-the-premise is robust alternative from an operational standpoint with its high speeds, hefty bandwidth, and future applications potential.

Thanks Leonard for an interesting topic.

As you know, competition is good for all of us, especially for the consumer. Customers, in general, think applications and social/business context. The network is expected to work well. Often the operator gets the blame when something goes wrong, doesn't matter if it is the application or the device.

In the case of telecom consortium, the cities (and its citizens) should believe in the value of the broadband enablement and fund appropriately or create viable apolitical business models.

How do you compare UTOPIA against these guidelines?  If executed right, other cities may follow UTOPIA model!

While recently attending the 2010 Broadband Properties Summit in Dallas, TX, I had a chance to meet with both UTOPIA representatives, and Keynote Speaker, Graham Richard, former mayor of Fort Wayne, Indiana, and founder of Graham Richard Associates.

Graham created a roundtable from a small group of individuals interested in the proliferation of broadband to study, collaborate, and make recommendations going forward, in helping to create partnerships with cities/communities in bringing broadband to Rural America.

This meeting led to my article on UTOPIA, in highlighting what communities can accomplish with public/private partnerships in moving a broadband agenda from inital ideas to conception. With the right research and development of a combined entity committed to a state of the art telecommunications infrastructure, good things can happen.

It involves thinking innovatively and purposefully for both short and long-term funding, long-term collaborative involvement from all community members, while creating the right management team with sound financial and operational experience for future success.

Communities working together can make a difference in the health and welfare of its citizens. It takes a long-term commitment to political, social, and fiduciary responsibility to make it happen.

Latest Contents
EEM Script to shutdown BGP Neighbor
Created by Jason Bandy on 06-16-2021 10:02 AM
5
5
5
5
Does anyone have any simple EEM Scripts handy that can shut down a bgp neighbor based on syslog entry? Right now I have some IPSLA's and track statements setup, but am clueless on the EEM part. (It was so much easier in regular IOS) all I want i... view more
How to pass traffic to correct router without full BGP table...
Created by kinwai on 06-16-2021 06:27 AM
0
0
0
0
In the setup, there will be 2 x BGP routers capable of doing up to 400g routing (non-cisco) and 2 more BGP cisco routers capable of doing multiple 10g routing. In day to day operation, definitely, there won't be such a crazy amount of traffic. Just f... view more
CUCM (SIP Trunk) without VG or CUBE
Created by kokojatnika on 06-15-2021 11:58 PM
0
0
0
0
Hi, Is there anyone configured cisco communication manager (CUCM) for direct calls to SIP Trunk provided by the Service Provider (Without Voice Gateway or CUBE)? I am looking for configuration steps Thanks
IOS-XRv 9000 - VPN Label Doesn't Get Imposed for Transit Tra...
Created by Alexey L. on 06-15-2021 04:39 AM
0
0
0
0
Hi, I might be missing something, but for some reason IOS XRv 9000 (7.2.2) doesn't seem to impose an inner (VPN) label to transit traffic only. For traffic that originates from the IOS XRv 9000 itself it seems to be working as expected. Sim... view more
ISR Router License
Created by almccanuel on 06-14-2021 07:34 PM
1
0
1
0
Hi All, TIA, Can you please help me if i need APP License for ISR4351 Router facing MPLS Circuit of my ISP?
Create ContentLogin to create content
Question or Discussion
Blog
Document
Project Story
Video
Related Content
Discussions
Blogs
Documents
Events
Videos
Project Gallery
Content for Community-Ad