What Device and Application Isn't My Teenage Son Using On the Internet? 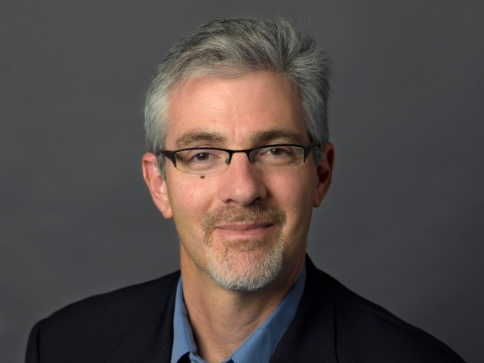 I have the greatest market research focus group in the world.  I have teenage children.  They are smarter than me and find ways of using new applications, services, and technologies long before I’ve heard of them.  Their usage patterns and methods of communicating will carry on into the future work force and will set the stage for the next 30 plus years.

My youngest son has given me permission to show his “command” center where he connects to the world.   A typical interaction consists of his Xbox where he plays his very interactive and bandwidth hogging games such as Modern Warfare 3 and Battlefield 3.  He also uses the Xbox for voice communications with his friends (even when he’s not playing games).  Note to application developers, he really wants to play these games when he’s mobile….Also, note that when his brother is home from college and both are playing these games, my home broadband grinds to a halt and I offload my own traffic to the 3G/4G network.  This is offload of the WiFi offload back to the 3G/4G.

The picture shows a PC that he uses to Skype video with his friends.  He’ll switch his voice between the Skype on the PC and the Xbox.  Of course, you need to communicate with your friends separately to make sure your video game strategy is sufficient (and so that others on the Xbox can’t hear it).  Note that this picture is a few months old and he has been using a new tablet to do similar functions as his PC depending on what he’s trying to do.

He also has in his lap a Smartphone where is he on Facebook, texting some other friends, and listening to his metal music.  Funny, our parents were worried about “Love Me Do” from the Beatles.  Listen to the Black Dahlia Murder some time and you’ll hear what I mean.

I was going to comment on his New England Patriots jersey but I’m still depressed about the Super Bowl.

He takes the command center on the road with his Smartphone and Tablet.  He can control his home PC from his tablet at friends houses (the schools are getting smart and block access to the internet during school hours).  We are at the point where the command center is mobile. 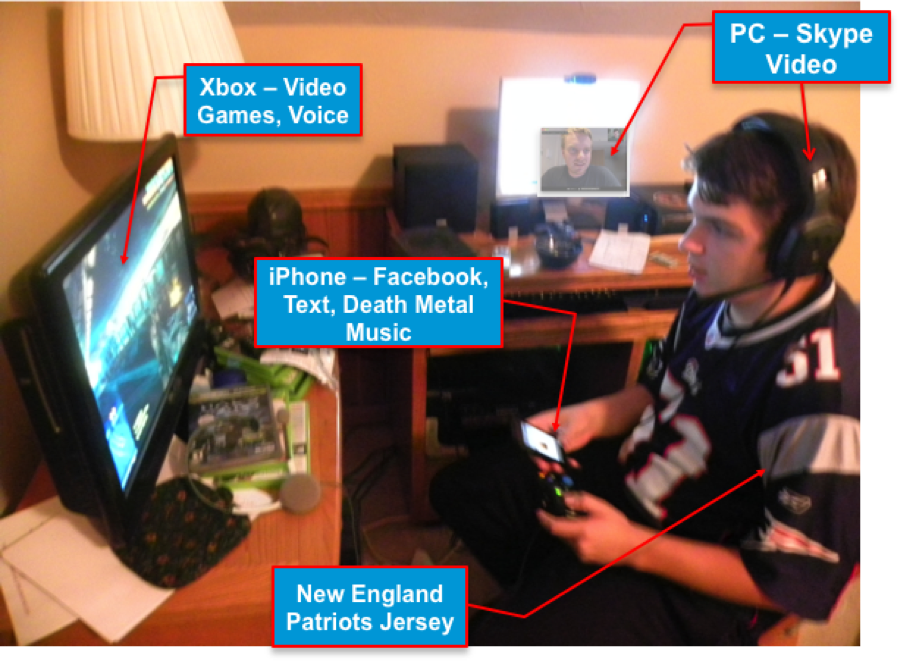 In one sitting, he’s interacting with 3 or 4 devices depending on how you count.  Some are on the fixed network and some are on mobile. From his perspective, it’s about the application not the network.  It’s also a command center in flux.  He has older WiFi enabled gaming devices sitting around – they were hot for about 6 months.  Tablets are taking over the PC.  It’s all quite amazing.  I had a home phone and a typewriting for most of my childhood.  We finally got an Osborne computer about the time I graduated high school (I’m dating myself now.)

The question is: What isn’t he doing in this picture? Besides not doing his homework….

He isn’t using circuit switched voice.  In fact, in checking his mobile “phone”, it does not appear he has actually made a circuit switched phone call in the past 6 months.  He has received circuit switched calls from his parents.  He also wonders what that ringing sound is occasionally around dinner time (our ancient home phone with sales calls).  Multimedia communications is still alive and well in his repertoire (with his various IP voice techniques he uses more minutes than me).   He’s not tied to a single device.  He’ll use whatever the latest greatest and he’ll optimize the usage for the various applications he’s running.  His identity is sometimes his facebook ID, sometimes his phone number (for texting), and sometimes his game ID.

His world is an all IP world with whatever the most convenient cool device(s) of the moment are.

I’d better enjoy my free market research while I can.  In a few years, they will be out of the house and in the real world.

Latest Contents
Buy American Act
Created by Techman2021 on 05-14-2021 06:50 AM
1
0
1
0
Does anyone know if Cisco SFP's or Cisco hardware in general is Buy American Act Compliant?
xconnect
Created by vin.marco on 05-14-2021 02:19 AM
6
0
6
0
Hi guysI have to configure an xconnect between a PE with ios XR version and a PE with ios XE version.The scenario is as follows:  I have 2 switches that have vlan, in this case 100, which must communicate through an MPLS network.The MPLS network... view more
VPNV4 label allocation
Created by dfauluchi on 05-13-2021 02:16 PM
6
0
6
0
Hi! I have a question about label allocation. I can't figure out how can I controll this behavior. I have a few PEs, all of them ASR9010.There's one that allocates a new local label for each vpnv4 prefix it receives from RR, even if label mode p... view more
BNG bundle load balancing
Created by Vladimir Pysarenco on 05-12-2021 10:57 PM
0
0
0
0
Hi all!! We are using ASR9001 for BNG. It's connected to ASR9010 with bunble 4x10G.To police users traffic correct, on BNG bundle subinterfaces this command it presented: bundle load-balancing hash dst-ipThis is for users download. For upload we... view more
NSR Disabled on standby RP
Created by jon_panes24 on 05-12-2021 12:59 AM
0
0
0
0
Hi, there are these syslog message that we occasionally get on our XR router with regards to BGP NSR going down on the standby RP. When we check the BGP neighborship or BGP NSR related commands were not seeing any flaps or anything unusual. Any parti... view more
Create ContentLogin to create content
Question or Discussion
Blog
Document
Project Story
Video
Related Content
Discussions
Blogs
Documents
Events
Videos
Project Gallery
Content for Community-Ad