When Will Small Cells Be Deployed?

The world awaits the arrival of small cells – impatiently. When will it happen? To answer, I have to ask: what is a small cell anyway? Is it an indoor residential base station, commonly known as femtocell, or an outdoor picocell. Is it a licensed band base station or a Wi-Fi access node?  Is it a compact base station or a remote radio headend (RRH)? Or is it perhaps a distributed antenna system (DAS)? While much of the small cell hype, and waiting, has been focused on outdoor small cells, there are significant deployments of these other 'small cells' today. From this perspective, small cells are 'happening today'.

Under the definition of heterogeneous networks, as well as from a practical perspective, a small cell is just that: a cell with a small coverage area. The fact that a user is receiving service from a femtocell, a picocell, a relay, or DAS does not matter to the end user. Going a step further, HetNets comprise multiple radio access technologies. Wi-Fi is being tightly integrated into large area wireless access networks and qualifies for the small cell designation. In recognition of the expanding and evolving definition of small cells, the Femto Forum rebranded under the name 'Small Cell Forum' early last year, and last month the DAS Forum was renamed the 'HetNet Forum.'

The fact that these other forms of 'small cells' are being deployed ahead of outdoor small cells is not a surprise. Their deployments track the economics of wireless networks and the concentration of traffic. Market analysts estimate that up to 85% of mobile traffic occurs indoors. Stadiums, convention centers, train stations and airports are hubs for high data consumption. Much so are large office buildings, coffee shops and other social gathering locations. Wi-Fi access nodes, DAS and remote radio headends are well suited economically to cover such venues today. The economics for DAS and RRHs work well in cases of large venues but start to break down for smaller venues, but this is where Wi-Fi access nodes backhauled with xDSL have proven effective. The economics for outdoor small cells will follow once that initial wave of small cell deployments captures most of the 'low hanging' traffic.

Viewed from this perspective, outdoor small cells will succeed in certain applications where the economics prove to be compelling. Small outdoor cells have been deployed on many street corners – it is a fact that this is not a new phenomenon, but what is new, is the expectations for large volumes because of huge demand on mobile data services. The timing of small cell deployments will be coupled with operator technology and spectrum strategies. Today, LTE is being deployed mostly in 'Greenfield' spectrum such as 700 MHz and 800 MHz digital dividend bands in the US and Europe, respectively. With spectral efficiency of LTE about twice that of 3G HSPA networks and in view of greater potential for capacity gain under the LTE roadmap, operators are compelled to migrate heavy data users to LTE and limit the infrastructure spend on 3G networks. Deployment of outdoor small cells requires a balancing act between LTE roll out and spectrum refarming with the objective of minimizing infrastructure costs.

In a case study of a major North American operator, consider the outdoor macrocellular sites in the dense urban downtown core of a top-5 North American city. The area under study measures 7 square kilometers with a resident population of over 77 thousand inhabitants. During the day many more thousands of mobile users of different profiles, prepaid or postpaid, converge into this area with different type of mobile devices, driving up demand for mobile data: smartphones, tablets, laptops, and other mobile Internet devices. The area is covered by 59 macrocells which at 8.4 cells/sq. km indicate a much higher cell density than that typically found in urban areas.

With 90 MHz of spectrum in bands below 2100 MHz on hand, aside from spectrum at higher frequencies that can be used for small cell deployments, the operator has good leverage in this market. This leverage can be used to refarm 3G spectrum for LTE services and time investments in such a way as to minimize infrastructure spending while ensuring that sufficient capacity is on hand to meet forecasted consumer demand. Consumer demand for mobile data is currently tracking at 66% CAGR between 2012 and 2017 according to Cisco's VNI forecast, but growth in demand has been declining for different reasons chief among which is traffic offload.  Hence, offload strategies will play a key role in impacting operator outdoor small cell deployment timelines. 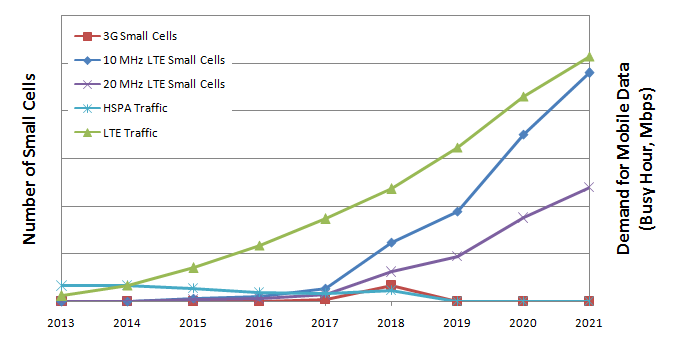 The number and deployment timeline of outdoor small cells in a specific area is tightly coupled with a number of complex interplaying factors: demand for traffic, spectrum, offload strategies, and many additional factors. In this particular scenario, the operator migrates subscribers steadily to LTE and shuts down the 3G data network in 2019. This requires a small number of 3G small cells be deployed in 2017 and 2018 to carry residual 3G traffic. Deployment of LTE outdoor small cell starts at low numbers in between 2014 and 2016, picks up in 2018, and rapidly rises in future years. The fact that the operator plans to shut down the 3G network a year or two after deploying the 3G small cells indicates that in reality a different approach is needed to accommodate residual 3G traffic. In fact, shutting data services off on 3G networks may prove to be specifically challenging especially when considering machine-to-machine type devices.

Clearly, simultaneous optimization of cost and coverage parameters will continue to be the driving force behind the evolution of “small cells”. However, deployment and growth of small cells will be predicated on their acceptance and integration into the service providers’ network architecture.

In the past, the notions of self-organizing networks (SON) and automatic integration into a service provider network have had a confusing effect on consumers who falsely assumed a measure of network connection/integration autonomy on the user side that does not exist. Ability to make a choice of purchase among various devices (small cells) on the market and the purported ease of use by the manufacturers should not be confused with the fact that service provides define and impose the rules of engagement in all cases with increasing hands-on involvement given to the consumers in order to further reduce costs.

In this writer’s view, integration of various small cell options, as listed in the article, into one box presents the most compelling scenario for the future evolution of small cells whereby service providers can seamlessly deploy and manage exponential proliferation of small cells.

I certainly agree with your comment that deployment and growth of small cells is predicated on their acceptance into service providers networks. This applies whether the small cell base stations are of the residential type (femtocells) or the carrier deployed outdoor small cells. My article refers to the latter category which has been much discussed and, should I say, hyped as a panacea for network capacity. In fact, it is only one solution out of many.