This document provides an overview of ARP operation and troubleshooting on IOS XR platforms, taking the ASR9000 as example.

IOS XR is a fully distributed operating system, designed for a two-stage forwarding operation. Two stage forwarding allows for a clear separation of ingress and egress feature processing. As the imposition of a Layer 2 header on the packet is an egress operation, only the line card that hosts the egress interface needs to know the Layer 2 encapsulation for packets that have to be forwarded out of that interface. As a consequence, ARP and adjacency tables are local to a line card. 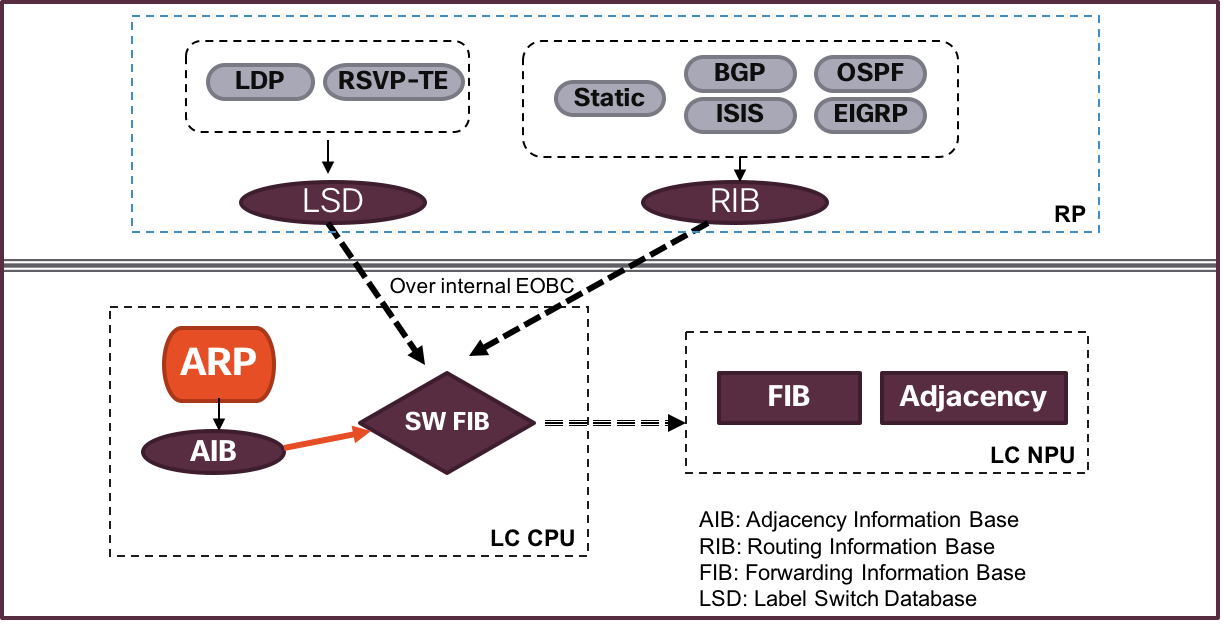 In case of Layer 3 Bundle-Ethernet interfaces ARP and adjacency information is local to all line cards that host the bundle members. That means that ARP information must be kept in sync on these line cards.

In case of a BVI, all Layer 3 processing must be performed on the ingress line card. That means that ARP information must be kept in sync between all line cards in the system. 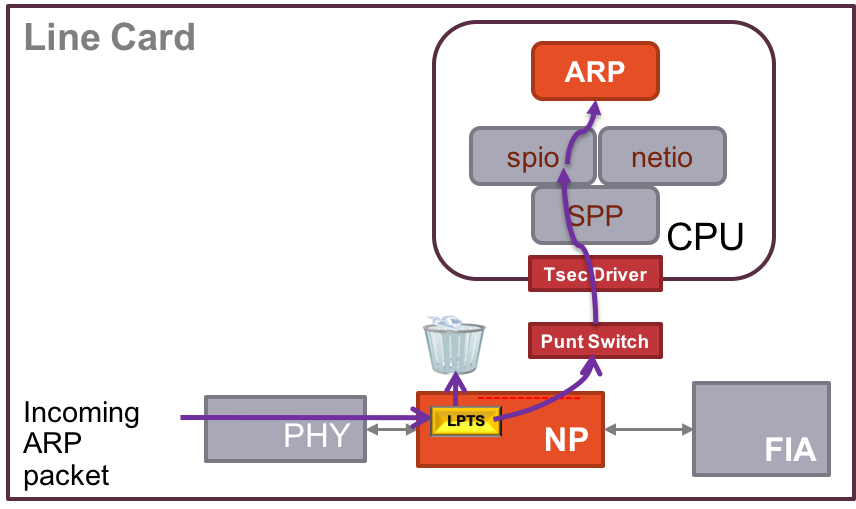 Outgoing ARP packets are injected from RP CPU to the NP that hosts the egress interface. In case of bundles, RP performs the load-balancing hash calculation and injects the packet to selected bundle member. In case of BVI, RP sends the APR packet toward np0 of a LC dedicated to handle packets injected into BVI.

Check which interfaces are hosted by this NP:

It is important to undertand that this rate per linecard is programmmed PER NPU. That means that if you have say a 24x10 typhoon linecard, which 8 NPU's, the possible rate is 8x400 pps towards the LC CPU.

The next step is to check the SPP statistics for ARP process. To do that you need to find first the ARP job ID:

Then check the SPP stats for that job. Please keep in mind that ARP process may have a different job ID on different line cards.

The above command output can be narrowed down to display the stats per VRF or even for interface:

In case of physical (sub)interfaces the RP will inject the packet towards the NP that hosts the interface.

In case of BVI run the following command to determine the NP to which the ARP packets will be injected:

When the line card that performs the egress IPv4 processing receives a packet for an IPv4 address for which there is no adjacency information, the packet must be punted to slow path for ARP resolution.

In case of L3 physical or L3 bundle (sub)interfaces, packets received from the fabric are punted for ARP resolution if there is no adjacency for the given prefix. This is because the egress line card performs the L3 egress processing.

In case of BVI, it's the ingress LC that performs the L3 egress processing. In that case the packet received from the PHY is punted for ARP resolution if there is no adjacency for the given prefix. 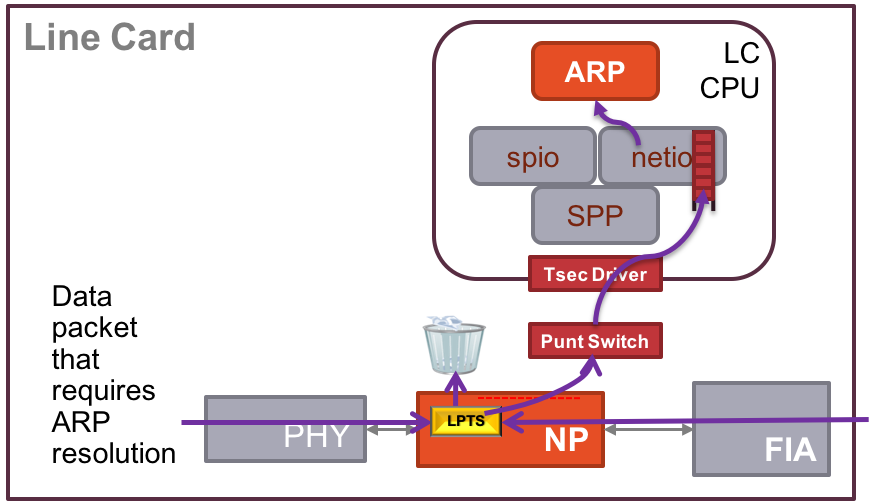 Next check the NetIO statistics and look into the row related to ARP queue.

If you want to look into the contents of packets punted for ARP resolution check the ARP job ID on the line card in question and use it in this command:

IPv4 packet header starts at offset 14 (0xC). You can use any packet decoder application to decode it offline.

If the NetIO ARP queue is getting overloaded, the following error is reported in the syslog:

As explained in the introduction to this document, two types of virtual interfaces require ARP tone synchronised across line cards.

ARP entries associated with a Bundle-Ethernet (sub)interface are synchronised between line cards that host members of the bundle.

ARP entries associated with a BVI interface are synchronised between all line cards in the system.

If any ARP synchronisation attempt fails, a message like this one will appear in the ARP trace. Intermittent sync failures may happen during burst of ARP resolution requests. Persistent GSP failures are indicating that the deployed ARP scale is likely too high.

You can also check the GSP stats for ARP job to see the synchronisation traffic info:

There is no hard limit imposed on the ARP table size. The ARP table can grow until the ARP process reaches the dynamic memory limit.

ARP scale tested at Cisco in all deployment scenarios is 128k entries per LC. It doesn't mean you can't deploy a higher ARP scale, but it does mean that dedicated testing of your deployment scenario is highly recommended, especially if your design solution requires ARP synchronisation.

If the ARP scale is high, the execution of the "show arp" command may slow down the ARP process and prevent it from timely responding to ARP requests or ARP resolution request. To work around that, you can check the adjacency entries instead of the ARP entries.

Remember that a show command with a pipe include (e.g. show arp | i 0000.1111.2222) would still process the whole table and only *display* the relevant details as determined by the regex. In other words, pipe include doesn't improve the scalability of the command, but omits certain uninteresting data not matching the regex.

What does this tell you:

If you want to check the MAC address associated with the IPv4 address, check the details of the adjacency:

The first 6 octets in the adjacency dump are the destination MAC address, i.e. the MAC address of the device that owns the displayed IPv4 address.

In high scale ARP deployments with HSRP/VRRP, you may want to synchronise the ARP entries between the HSRP/VRRP peers. Starting with XR release 5.3.2, you can use the ARP Geographical redundancy (ARP sync) feature for this purpose:

This command doesn't impair the ARP operation (query, reply, proxy), it only prevents the creation of ARP cache entries. Commit of this command to configuration doesn't clear the existing ARP entries. You have to clear the subscriber sessions before commit.

For more info on route scale, refer to this excellent document:

Thanks for this detailed writeup

ipNetToPhysicalTable can be used to poll the ARP table content. In the high ARP scale we don't actually recommend that, but with the ARP scale enhancement in BNG that you are using the ARP scale won't be that high any more.

There is no SNMP OID to show the summary information. Would it help if we would evaluate the implementation of XML schema?

All ports belonging to np3 of A9K-8X100GE-L-SE have same issue with ARP (and all other packets also but lets consider ARP). I see on the port (TenGigE0/1/0/6/0) ARP requests from connected device to ip address assigned to this port itself:

But device doesnt send responces. I tried command adduced in this article to check number of ARP packets received on interface and it shows 0, despite hundreds of ARP requests received on the port

Port itself doesn't have any errors/drops. NP counters hasn't any drop counters either.

Ports belonging to other NP on same line card hasn't this issue. Can you please suggest where to look next and how? NP3 - LC-CPU connection?

do you see the ARP punt counter increment on NP3 of 0/1?

If the counter doesn't increment and if the router is running 5.3.3, run the "sh controller np capture" to see why are these packets dropped by the NP. There is another doc on supportforums that explains how to use this command.

Did you open a TAC SR already?

Thanks for answer! No, there are no ARP punt counters  and DROP counters on NP3, I mean they are zero. And code, unfortunately, is 5.3.1.

In case we have L2 connected subscribers and both dhcp and unknown source FSOLs are configured under the access interface, can "subscriber arp scale-mode-enable" prevent subscriber ARP entry creation (in case of DHCP binding absence).

I hope this answers the question. 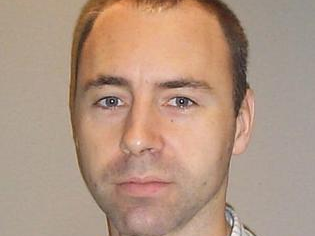 In addition, in recent version (5.3.3) the following command is useful to display the arp resolution history.

Latest Contents
EEM Script to shutdown BGP Neighbor
Created by Jason Bandy on 06-16-2021 10:02 AM
5
5
5
5
Does anyone have any simple EEM Scripts handy that can shut down a bgp neighbor based on syslog entry? Right now I have some IPSLA's and track statements setup, but am clueless on the EEM part. (It was so much easier in regular IOS) all I want i... view more
How to pass traffic to correct router without full BGP table...
Created by kinwai on 06-16-2021 06:27 AM
0
0
0
0
In the setup, there will be 2 x BGP routers capable of doing up to 400g routing (non-cisco) and 2 more BGP cisco routers capable of doing multiple 10g routing. In day to day operation, definitely, there won't be such a crazy amount of traffic. Just f... view more
CUCM (SIP Trunk) without VG or CUBE
Created by kokojatnika on 06-15-2021 11:58 PM
0
0
0
0
Hi, Is there anyone configured cisco communication manager (CUCM) for direct calls to SIP Trunk provided by the Service Provider (Without Voice Gateway or CUBE)? I am looking for configuration steps Thanks
**New Episode** Cisco Champion Radio: S8|E24 Cisco Routed Op...
Created by aalesna on 06-15-2021 09:31 AM
0
5
0
5
Check out our latest release on Cisco Routed Optical Networking solution. Listen: https://smarturl.it/CCRS8E24Follow us: https://twitter.com/ciscochampion  Disruptive network transformation may only happen once a decade. First movers c... view more
IOS-XRv 9000 - VPN Label Doesn't Get Imposed for Transit Tra...
Created by Alexey L. on 06-15-2021 04:39 AM
1
0
1
0
Hi, I might be missing something, but for some reason IOS XRv 9000 (7.2.2) doesn't seem to impose an inner (VPN) label to transit traffic only. For traffic that originates from the IOS XRv 9000 itself it seems to be working as expected. Sim... view more
Create ContentLogin to create content
Question or Discussion
Blog
Document
Project Story
Video
Related Content
Discussions
Blogs
Events
Videos
Project Gallery
Content for Community-Ad