ROSA NMS may be used to monitor hundreds of devices and receive messages from them. Customers use the Message Viewer to check the details of any alarms received from monitored devices.

There is a feature available in ROSA NMS called “Repetitive Alarm Suppression” which can be used to avoid the message viewer filling up with a large number of the same message. By using this feature an alarm which occurs repeatedly within a configurable time interval is displayed only once with a count indicating how many times the message has been received.

In ROSA GUI, select the server on which the Repetitive Alarm Suppression feature must be configured

Select Options from the Messages menu, as shown below: 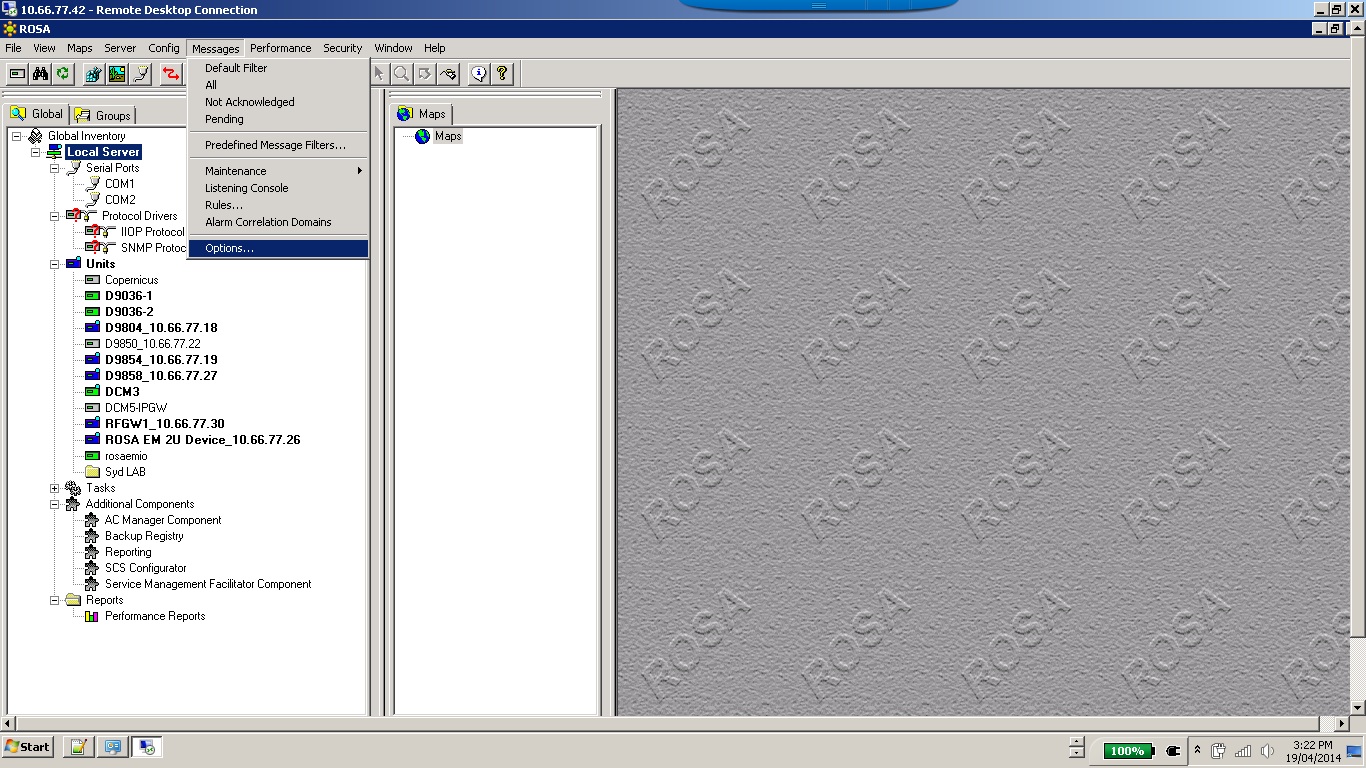 The “Message Options” screen appears, as below: 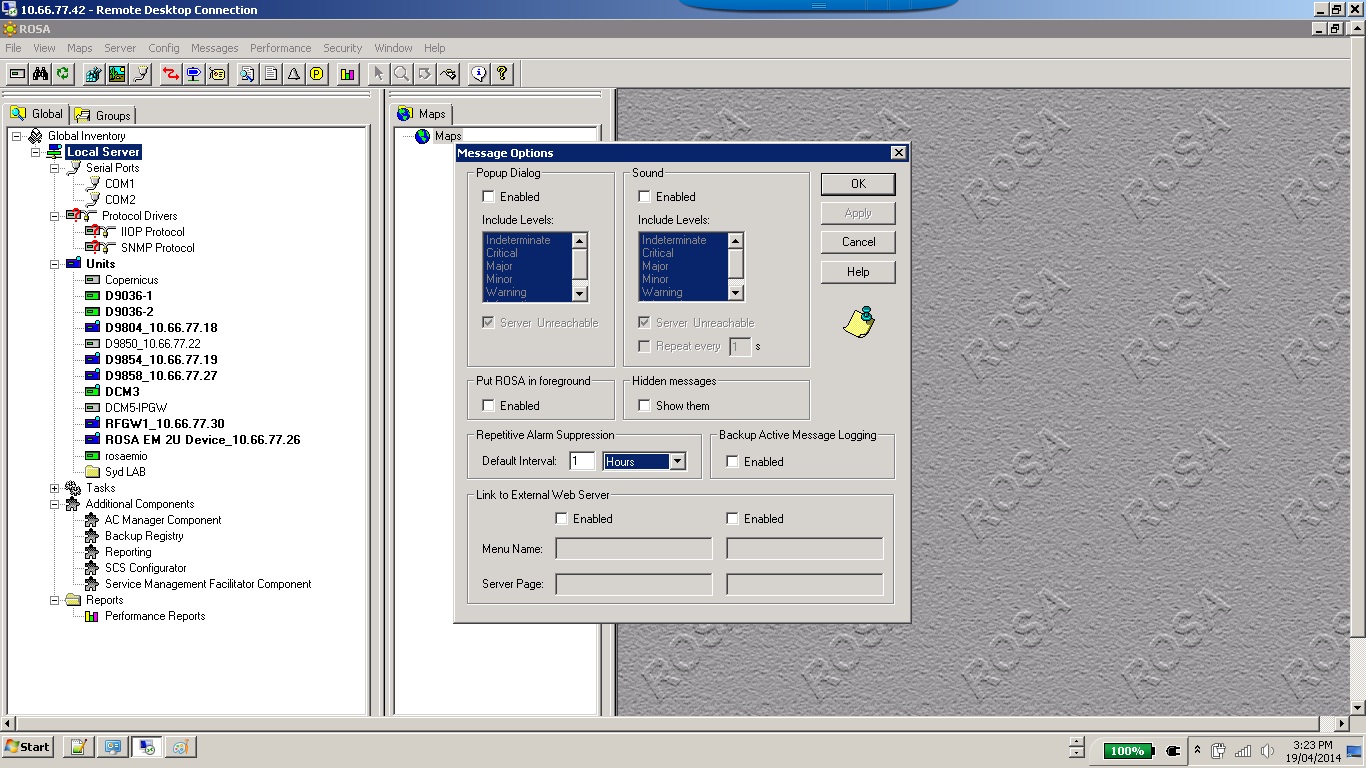 In the Repetitive Alarm Suppression box above, select a Unit of time from the drop-down menu and configure a time interval for the Default Interval setting.

Next, select Rules from the Messages menu, as shown below: 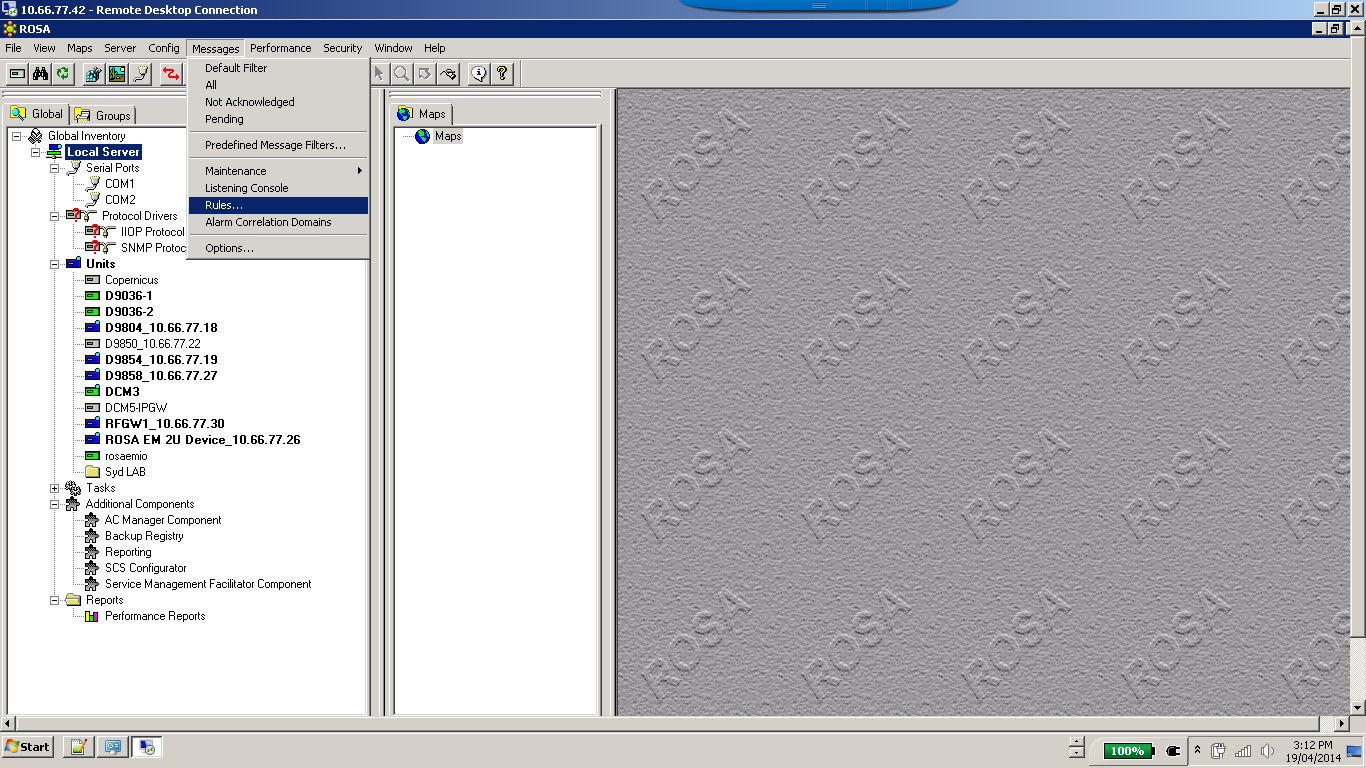 In the following screen that appears, select the line which says “Suppress All Repetitive Alarms” and click on the Enable button. 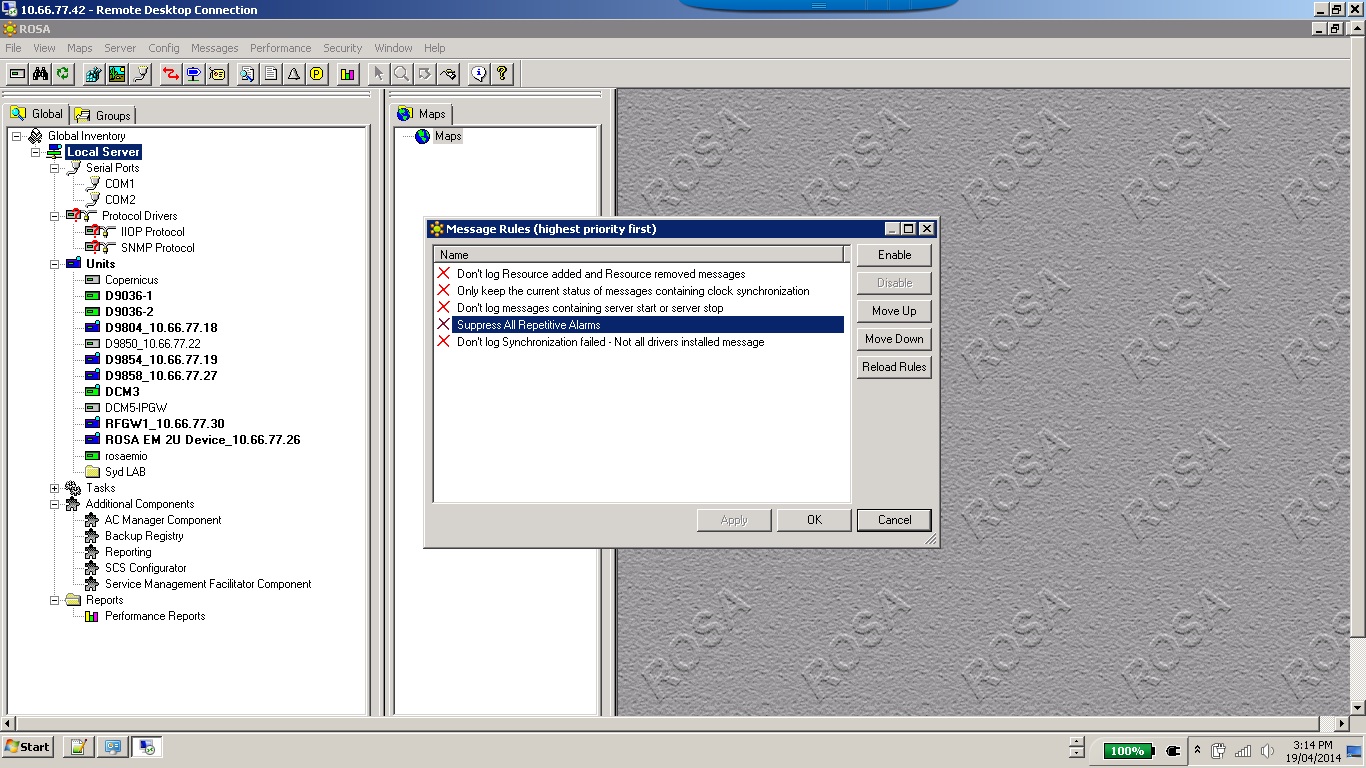 After this, identical alarms which are repeated within the interval configured will be displayed only once with a count indicating the number of times the alarm has been received in that interval.

0 Helpful
Share
Latest Contents
ASR 9000/9900 C21 Power Connectors
Created by philclemens1835 on 08-07-2020 03:33 PM
0
0
0
0
My experience has been that it is normal for C21 power cables to have some difficulty fully seating in the PEM's, even after backing out the set screws more than they already are from the factory.  Eventually we get them fully seated and secured, but... view more
MPLS QOS Assistance
Created by Jose J Hernandez on 08-07-2020 10:49 AM
0
0
0
0
I have a small MPLS network serving 15 clients,, I am delivering services via  L3 VPNs and wanted to implement end to end QOS services using DSCP Pipe mode. however I am running into a barrier finding templates that can assist.I wanted to have some f... view more
BNG Service accounting
Created by Peyman Zadmehr on 08-07-2020 06:50 AM
4
0
4
0
HiWe are using ASR1K as PPPoE BRAS. With our pppoe service we have different accounting information about  the volume of traffic which subscriber uses. this information is retrieved via different accounting updates which are sent for the particular P... view more
ASR 9010 IGMP snooping trouble while changing linecards
Created by Vladimir Pisarenko on 08-07-2020 05:50 AM
0
0
0
0
Hi! We have some troubles with igmp snooping when we are trying to change linecards from trident to typhoon. We have more then 1000 igmp groups on our router. Software version 5.3.4 SP7.After changing linecards seems that IGMP messages starts to drop... view more
ASR9K and ASR99K BNG
Created by Peyman Zadmehr on 08-07-2020 02:21 AM
2
0
2
0
HiAs I understood the main difference between ASR9K and ASR99k is SCB Module. This simply means Fabric of ASR99K is provided by a dedicated module. Regarding BNG feature, Is the model of SCB has any impact on Number of PPPoE Sessions on Amount of tra... view more
CreatePlease login to create content
Discussion
Blog
Document
Project
Video
Related Content
Discussions
Blogs
Events
Videos
Projects
Content for Community-Ad