Welcome to the new Cisco Community. LEARN MORE about the updates and what is coming.
Turn on suggestions
Auto-suggest helps you quickly narrow down your search results by suggesting possible matches as you type.
Showing results for
Search instead for
Did you mean:
Create a new article
Options
63099
Views
21
Helpful
73
Comments

IOS devices have the concept of control plane policing. IOS-XR doesn't use that concept but instead uses a very comprehensive and powerful Local Packet Transport Services. In this document it is explained how LPTS works and how you can work with it, monitor and verify it.

LPTS is the concept of reflexive ACL's, punt policers and has an "internal" FIB or iFIB that directs certain packets to various nodes. IOS-XR can handle certain traffic on the linecard (such as BFD, Netflow and ARP) and these packets are instructed by LPTS to be handled by the local CPU rather then the RSP CPU.

At the same time, there are ACL's in place that allow for instance the punting of Telnet traffic and then per host if configured so, but another component of LPTS called MPP, the Management Plane Protection.

Generally, the default values for LPTS provide the level of protection you are after. However there are some rare circumstances whereby you want to tune the values of LPTS in order to get the service levels you need. LPTS is very dynamic in nature and pierces holes into the protection system as particular items are configured.

The LPTS policers work on a per NP basis. So if the LPTS police value is set to 1000pps that means that every NP on the LC can punt with 1000pps to the RSP CPU or LC CPU. This is something to take into consideration when evaluating the A9K-8T-x cards who have 8 NPU's per LC.

From a birds eye view, LPTS looks like this: 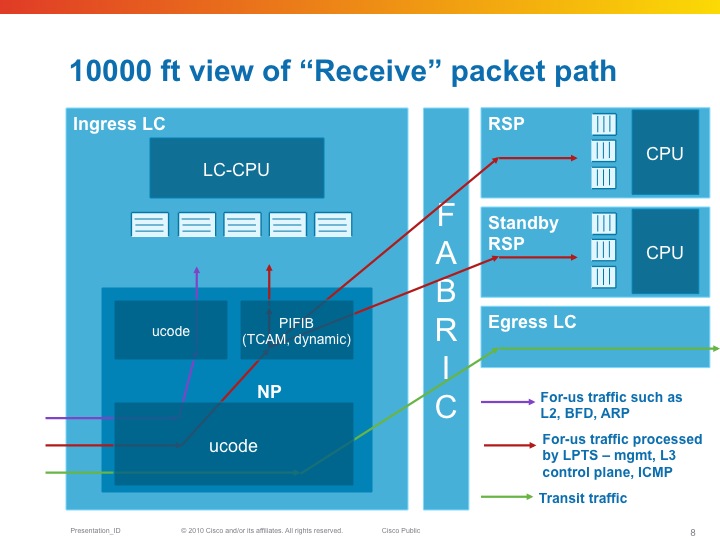 The NPU has a table that tells it where to send packet to (LC or RSP) as part of the "internal FIB" or iFIB. These packets are punted at a pre-defined rate, they can be tuned in XR release 4.x and later. Also in the TCAM which is used in the ASR9K for ACLs (amongst others), are lists that define which packets we want to allow and not. This will be discussed in the MPP section of this document.

0) LPTS has Hardware policers on line cards to limit traffic sent to local or remote nodes
0) LPTS entries in TCAM classifies packets to select a policer to apply
0) The policer value can be tuned to 0 (to drop all packet matching classification criteria)
0) Polices on protocol (BGP, OSPF, SSH) and flow state (BGP established, BGP configured, and BGP listen)
0) Policing done on the LC Hardware ASIC before packets hit RP/LC CPU
0) Filters are automatically and dynamically installed by the IOS XR infrastructure

So for-me packets are undergoing the Pre iFIB classification and policing upon which they are directed by the iFIB, which is the second level of filtering to the destination node.

One of the great strenghts with LPTS is the dynamic ACL creation. This is configuration driven and no user intervention is required.

In addition to that, LPTS has different flow categories based on the state of the protocol. For instance, BGP has 3 different states:

Unknown is the flow whereby we have TCP port 179 traffic, but we have no neighbor configured from that source. Policed very heavily.

Configured is the entry whereby we know the source address of the peer, but the session is not yet established (no known source port from the peer), Policed moderately.

Established is where we have all the L3 and L4 data from the session. Lightly policed.

The entries for configured is driven by the configuration of the neighbor statement under the router BGP section.

Established is dynamically inserted when the peer establishes.

You could theoretically police the unknown to a rate of zero.

The following table can be seen with the output of the command:

If you use the command

You can check the detailed entry of the PiFIB (policer)

You can configure the LPTS Policers on a PiFIB bases and also the punt policers can be adjusted.

The following commands apply. Note that this is on a per linecard basis. All NPU's on that linecard will get reconfigured.

Glean adjacency or ACL-deny packets can be tuned for instance via that command.

The PIFIB can be reconfigured via the following commands:

“policer” is for dynamic flows (like BGP, OSPF, etc protocols directed  by RSP)

“static-policer” is for pseudo Static flows (like BFD, CFM directed by the LC) These are hard-coded and include Exception processing packets.

There is a CLI to change few of the exception processing as well (for e.g. ICMP unreachable)

LPTS is not SNMP enabled (request has been filed and is in the works, no target release defined at time of writing). Though there are very inventive ways to monitor LPTS and generate alerts. There is a TCL script that you can use with EEM in order to get some level of alerting.

Attached to this article is the script package and here is how you set it up:

How to clear LPTS statistics

In the standard configuration all interfaces have access to the Telnet, SSH and SNMP daemons.

Inband vs Out of band

All linecard interfaces are designated to be inband, meaning they can transport user traffic as well as management traffic.

The mgmt interfaces on the RSP are designated out of band. This means that they can't transport user traffic but only management traffic.

Out-of-band interfaces can't "speak" to other interfaces as they are desginated for managment traffic. So eventhough there is a route in the system that would send traffic out of the mgmt interface, Fabric enabled interfaces on the LC can't 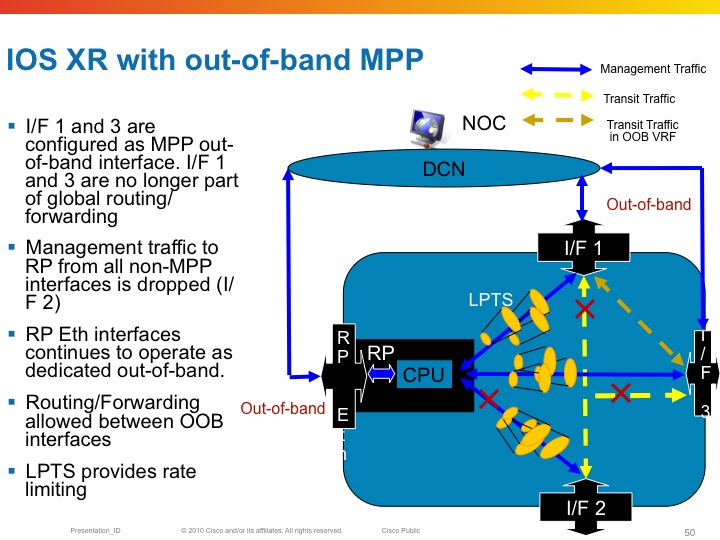 This means that every for me packet with port 23 as the dest port will get serviced.

In this configuration example I am designating two interfaces as inband, so they will still be able to forward transient traffic and allow inbound telnet traffic. At the same time I allow telnet from any host on Gig0/0/0/10 and only telnet from a few peers on Te0/1/0/0.

The LPTS bindings are dynamically changed as per following output:

We can also look at the pre internal fib (piFIB) and check the entries there:

Decoding the Destnode in LPTS entries

In the example above you see the following detail: LU(48). This section explains that number and detail.

The LU means local unicast fabric. The 48 is a very interesting number.

The device that this output is taken from is an ASR9010. Which has 8 LC slots and 2 RSP slots. On both sides of the RSP's in the middle

If I were to decode the 30 into binary it looks like this:

the RSP's!! So telnet is delivered to the RSP.

If you can use only p2p OSPF network type

Note that OSPF p2p network type is the recommended setting even on Ethernet interfaces unless you have multiple routers on the same segment.
Do we really need BGP, LDP-TCP, MSDP, default – for unconfigured sessions

means there is no fragmented packets allowed or we allow them?

We use Cacti to monitor ASR by snmp. And when Cacti did bulk.SNMP request at 100 OID - server fragment it and ASR receive this packets fragmented. And we think it drops them.

you could do a quick debug snmp packets and see if the request is recevied from that mgmt station.

reassembly would happen in netio, so before it is handed to udp process and subsequently snmp.

It is a system parameter that is not configurable.

it is a bit dangerous also because you effectively open everything up towards a particular destination.

best is to fix the packet fragment from the mgmt station...

What is the primary difference between the protocol-Default and protocol-known in the Flow type of the LPTS? Applying the ACL and rate limiting it does not work. Please guide us with in-depth understanding on this.

In MPP, the IP address is not accepting with subnet length and shows error 'Stray bits in prefix-length of address' in router running version 5.2.0. Is this is still a bug CSCts11467 which is being hit.

-default is hit for the protocol for which we have no explicit peer configured.

-known would be hit in case we have say an ntp server defined, an ssh client, bgp neighbor etc.

all non configured specific peers will hit the -default rate.

according to this link :

The mgmt interfaces on the RSP are designated out of band. This means that they can't transport user traffic but only management traffic.

Is it possible to convert these mgmt interfaces to inband, like this?

And, if not possible, any thoughts on how we can tackle the following problem?

hi tom, you can't convert them to inband, but you can allow them to route through, however I would not recommend for this.

By default the system will NOT route through the mgmt ethernet port.

Say, you have a static default route pointing out the mgmt ethernet. That means that traffic arriving from a linecard for which we have no destination specifically in the FIB will NOT get forwarded to the RSP for egressing the mgmt port.

Traffic ingress on LC will get dropped by the NP in that case.

Same deal for traffic arriving in the MGMT port, it will not get forwarded out to a linecard either.

You can override that behavior, for testing purposes with the command :

Thank you for your quick response! It seems you also explained it here: https://supportforums.cisco.com/discussion/11840376/use-management-ethernet-port-asr9000 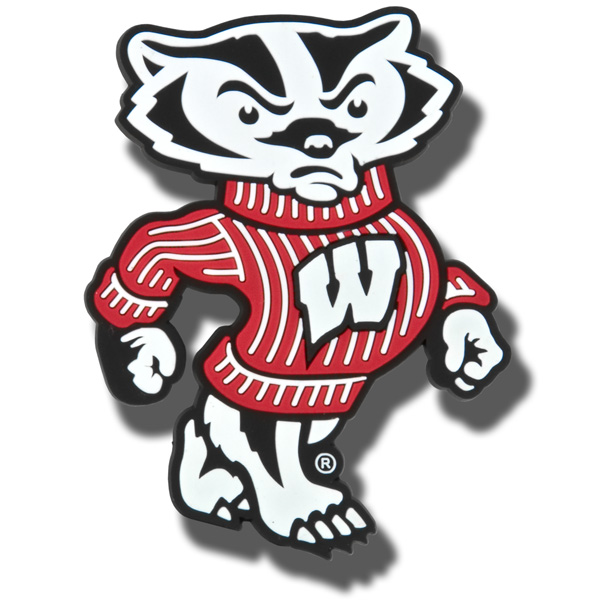 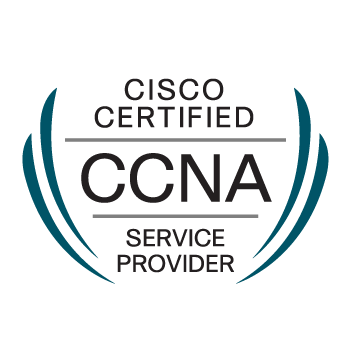 Is it possible to use LPTS (or maybe CoPP / MPP) to reduce the impact of DNS DDoS attacks?  Basically, we want to perform rate limiting in hardware.

sure thing that is possible Ben!!

check cisco live id 2904 from sandiego 2015 and sanfran 2014 I had a specific section there on the NTP DDOS, but similar approach exists for DNS (if locally targeted) too.

if not locally targeted, but transit, then you can use BGP flowSPEC to define a rule and police or redirect that particular traffic very powerful!

Hi Xander, thanks for sharing this doc, it's very useful.

Is it possible to know the LPTS punt police default NPU values for ARP protocol?

We have to migrate a service with faster arp learning and we need to know if the default it's ok or if we need to configure LPTS before migration.