I've enabled SNMP over VPN tunnel but it doesn't work.  Has anyone else come across this issue? 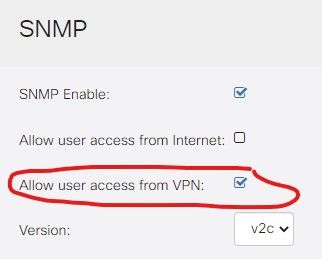 Looking at the firewall rules, the VPN doesn't appear in the pick lists - you can only create rules to/from LAN and WAN, not to/from VPN.

First post info on how exactly you have configured your VPN tunnel and where is your snmp-trap-receiver or your snmp-network-management-server?

1. Is this how you have deployed?

2. If yes, then please post the exact vpn tunnel config applied on GW1 and GW2

- what i mean is what are the Local/Remote traffic-selectors/subnets configured on each of the vpn-peer-gws?

3. Iam asking above questions for a very valid reason becos i know why its not working for you  and it depends on HOW you have configured the VPN tunnel...

Note: You should obfuscate your wan-ipaddresses or mention something else...but please mention clearly what are your lan-subnets configured and what are mentioned in your vpn tunnel policies on each GW....no need to hide any lan-networks....ALL OF US USE THE SAME RFC-1919 STANDARD  private ip subnets in our organizations - 10.x.x.x/8, 172.16.x.x/12 and 192.168.0.0/16....and these are all NOT routable over internet directly...they need to be nated to valid public ipaddresses (that you have configured on your wan-interfaces)....the point is dont try to change too much of your network settings when you post the info here....it unnecessarily creates confusion in our understanding....

Beginner
In response to nagrajk1969

Traffic is flowing both ways over the tunnel with no issue.  Both ends are using address space in the 172.16 range with no overlaps.  Head end is a Watchguard M400 and as mentioned, tunnel is up with no routing issues.  I can ping the RV across the tunnel and web browse to it, it's just that SNMP doesn't work.

Yes. I never doubted that the tunnel is working correctly and also the traffic is getting routed correctly without any issues

But with reference to issue observed with SNMP traffic, what i wanted to know was:

1. On the RV160, is the ipsec policy configured as below?

- You see as far as i have observed:

b) when you configure the remote-subnet as ANY as you have configured on the RV160, the issue is seen not only for snmp traffic, but even for routing Syslog-logs over the ipsec tunnel (to a syslog-server behind the M400-peergw

2. In case you have configured the ipsec tunnel as below (using some example subnets as shown below), then you SHOULD NOT BE SEEING ANY SUCH ISSUES WITH SNMP (OR SYSLOGS) AS REPORTED BY YOU..

Beginner
In response to nagrajk1969

From your reply, I couldn't understand if you said this was correct or incorrect - your post says that both 1. and 3. should work.

1. yes, my earlier post was little confusing...so i have now updated it with the correct info/points...now it should be more clearer to you

2. And thank you for providing the info on the subnets and the ipsec policy you have configured on the RV160.

a) Firstly what you have configured (with remote-subnet ANY in either of the peers ) is absolutely correct. Please dont change any configs on either the RV160 or the M400. This is standard configs applied and required for Hub-and-Spoke vpn topologies...so continue to use it as is

b) Now, The ONLY issue with this config (using remote-subnet as ANY) in ALL RV160/RV340/345/260 series of router is that the routing of the SNMP/syslogs/dhcp-relay traffic generated BY/FROM THE RV160 gateway itself to remote destinations over the IPSec-Tunnel is a problem. This is what you are seeing...and its a BUG which is specific to ipsec tunnels confgured with remote-subnet ANY....other tunnel configs dont have this issue

3. So the ONLY way at present to solve this issue of snmp-traffic routing over the ipsec tunnel is to apply the below work-around steps on RV160 ONLY

a) Some Assumptions by me:

Step-1: Next iam assuming and considering that the ipaddress 172.16,6,253 IS NOT ASSIGNED AND MUST NOT BE ASSIGNED TO ANY HOST/DEVICE/SERVER/PC/PRINTER/ETC IN YOUR LAN-NETWORK OF RV160

NOTE: THIS IS A MANDATORY REQUIREMENT AND MUST REQUIREMENT FOR THIS WORKAROUND TO WORK CORRECTLY IS TO ENSURE THAT 172.16.6.253 (or any such ipaddr in the subnet 172.16.6.x) IS NOT ASSIGNED TO ANY HOST/DEVICE/ETC ON YOUR LAN-NETWORK OF RV160

- if this ipaddr is assigned/active in your lan-network, then this work-around will NOT work

- similarly the same principle will apply when you want to route/send all syslogs generated by RV160 to a syslog-server behind M400-peer, say with the ipaddr 172.16.9.102...and so on

So what would happen is that whenever the RV160 gateway generates a snmp-trap and it has to be sent to the snmp-server (configured as 172.16.9.101 for example):

- by default and at present the RV160 will be trying to send the snmp-traps traffic with the source-ipaddr of the wan-interface address, becos this is where the default-route is pointing to....

- AND since there is a IPSec Policy of "172.16.6.0/24<>ANY protect with IPsec" AND SINCE THE SNMP-TRAFFIC PACKET THAT IS FORMED BY RV160 WITH SRC-ADDR OF 172.16.6.1 IS MATCHING THIS IPSEC POLICY, IT WILL BE CORRECTLY AND SIMPLY ROUTED OVER THE IPSEC TUNNEL

try this out, and iam 100% sure that this workaround will work for you...till the bug is fixed by Cisco

Sorry i forgot to add an additional followup to my previous/last post:

The reason and the requirement to add the "dummy-route" in this specific vpn tunnel scenario is:

Your deployment is as below, and the ipsec tunnel is UP and working, and we will assume that there are NO dummy/static-routes at present:

2. Now what happens here is that, as per routing standards, the response/reply is always sent back using the same interface on which the connection/packets have been received. This means that the response/reply packets to the http/tcp connection is sent with the source-ipaddr of 172.16.6.1 to 172.16.9.101... This is standard routing behavior and is correct

- And the same routing principle applies to any other traffic sent or rather "Initiated" from 172.16.9.x network to 172.16.6.1 (which is the internal lan/vlan1 interface of RV160) and all this traffic correctly gets routed thru the already established ipsec tunnel

3. In the case there are some events that "trigger" snmp-traps to be sent/initiated BY THE SNMP-SERVICE RUNNING ON RV160 to 172.16.9.101 (which we will assume is the snmp-server/trap-receiver configured in the snmp-gui pages of RV160), then this is a "new" connection or "new" traffic that is "initiated" from RV160. So below is what would happen

a) When RV160(or the snmp-service) builds the packet (it would be udp packet in this case) to be sent to the destination ipaddr 172.16.9.101, it needs to select a source-ipaddr for the udp packet to be sent.

b) So when there is a route lookup done on RV160 for the destination 172.16.9.101, there is a "Default-Route" existing and this points correctly to the isp-router ipaddr 101.101.101.1 as the default-gateway....and the interface thru which this default-gateway/route is reachable is thru the "wan" interface

c) So, again as per routing standards, the source-ipaddress of the IP-Packet (that has the udp payload of the snmp-traps) that is sent out to a remote destination will always be the ipaddress of the outgoing interface.

5. BUT we/you/the-user wants and the requirement is that all snmp-traffic "generated/initiated" from RV160 MUST BE SENT ACROSS THE IPSEC TUNNEL TO 172.16.9.101.

b) Hence the present workaround of adding the "dummy-route" comes into picture here, now.

a) When the snmp-traps are "generated/initiated" by the snmp-service on RV160 to destination 172.16.9.101, the same route lookup happens, and now there is a explicit static-route present and therefore the "default-route" does not get applied here