Geez, I am having all kinds of problems with this SA 540.  I configured a custom firewall rule as seen below.  The intent is to port forward into an internal workstation and translate the port to the standard RDP port of 3389 (second image).  The external client goes to rdp.domain.com:9833 to make the RDP connection.  It worked for a day and then it did not.  I have disabled the rule and re-enabled it, deleted it and recreated it, changed the port and nothing works.  The logs don't even record a hit.

I can't restart the router until after hours, but why would that even be necessary?  How about it Cisco?  Is this a problem with the appliance?  It is running firmware version 2.1.71. 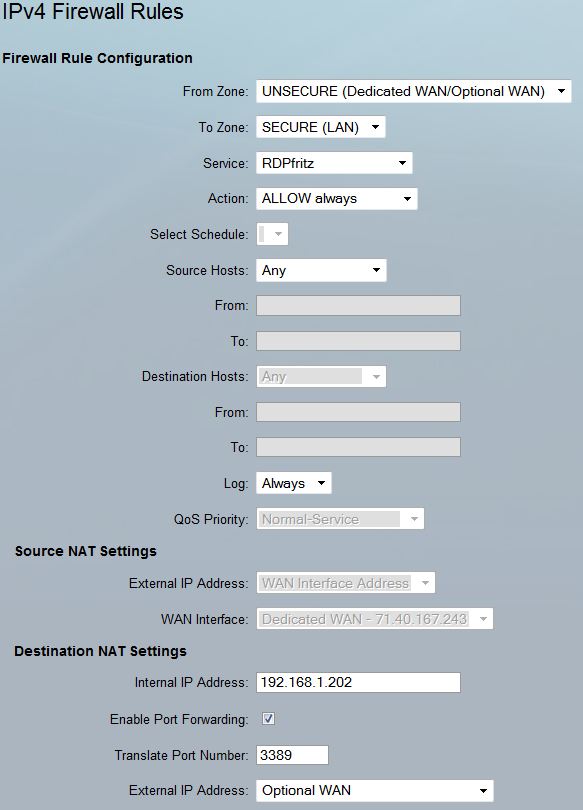 It's good to hear that you were able to resolve your port translation issues.

Re: SA 540 Port Translation Not Working

Everything seems to be set correctly but i have a few questions? First i see you specified external IP address (optional WAN)how is the both wans configured, and do you have SA540 in load balance mode? if so do you have any protocol binding rules enabled? (If so) the computer you're using to connect (RDP) are you binding it out the optional WAN or Dedicated WAN. This could conflict depending on your rules.

Re: SA 540 Port Translation Not Working

Thanks, Jasbryan, for the quick response.  The optional WAN is an active connection using FIOS.  The dedicated WAN is using Road Runner.  The mode is configured for failover with the Road Runner connection in standby.  It just happened that way.  Originally, Road Runner was to be the primary Internet connection, but it did not prove as reliable as FIOS (FIOS is faster, too).

When a user attempts a connection, it is to vpn.domain.com:9833 for example.  I am to configure about six ports in all, so they will translate from 9833 through 9838 to the internal workstations at 3389.  Also, there is a server that is being translated on the traditional RDP port so you have 3389 to 3389 on that one.  The server works fine.  If you look down the list in the below image, you will see Websense.  That works, too.  I am just wondering if the SA 540 is having trouble port translating multiple connections coming in on different remote ports, but going to the same local port even though it is to different computers.  What do you think?  This should not be a problem.  I do this exact thing using other routers.  As a test, I disabled the first RDP rule in the list and there was no change.

This really has me stumped.

If the image is not viewable in this post, save it to your computer and then view it.

This issue has been resolved.

It's good to hear that you were able to resolve your port translation issues.

0 Helpful
Reply
Latest Contents
Configuration Cisco SPA112
Created by nopnoogul1 on 01-07-2020 10:41 PM
1
0
1
0
I setup SPA112 Connect to Ayaya Server but the ATA Not Fax In and Out
Important Update to Automatic Software Download Feature for ...
Created by Jo Kern on 12-13-2019 03:04 AM
0
0
0
0
Change in ASD Automatic Software Download Feature Dec 13th, 2019 Cisco RV160, 260, 340, and 345 Series Routers   Due to an API change in Cisco’s software download platform the Automatic Download Feature (ASD) on RV series routers will be temporarily ... view more
SFP Compatibility with RV160 and RV260 Series Routers
Created by joseacor on 11-19-2019 02:18 PM
0
15
0
15
SFP Module Support List for RV160x and RV260x Devices Small form-factor pluggable (SFP) ports are included on the RV160 and 260 routers to allow the use of optical SFP transceiver modules. SFP’s convert the optical signals to electrical signals. SFP’s al... view more
Small Business Support Newsletter - November 2019
Created by CoreyP319 on 11-13-2019 10:24 AM
0
0
0
0
You're invited!        Welcome and thanks for visiting the Small Business Community Newsletter. This is our first of what we will make a monthly newsletter where you will be provided information on New products and trends, What’s ... view more
Cisco Business Design thinking Workshop: San Jose
Created by bhchopra on 11-11-2019 11:42 AM
0
0
0
0
Hello @All ,    I am Bhuvi Chopra, a product manager on the Cisco Business (formerly SBTG) Team.   Cisco Business is excited to offer its San Jose customers a unique opportunity to join us at Cisco headquarters for a design thinki... view more
CreatePlease login to create content
Discussion
Blog
Document
Video
Related Content
Discussions
Blogs
Documents
Events
Videos
Small Business community Righttrail
Cisco Small Business Software and Firmware
Download the latest firmware here
Popular Support Links