I purchased a SA520 some time ago, and initially I thought that things were great until I noticed that it would occassionally reboot unexpectedly.  This has been going on for some time now, so I recently added it to a monitoring tool that I installed on my network.

From the attached image, you can see that the memory usage appears to rise over time, and then the device reboots and the process starts all over again.  Could there be a memory leak within the software?  I don't see why the memory would slowly rise, especially since it is not under high constant load, and then reboot.

I was hoping that Cisco would release a fix for this problem, but it appears that it has gone overlooked.  Anyone else having this problem, or know how I can fix this? 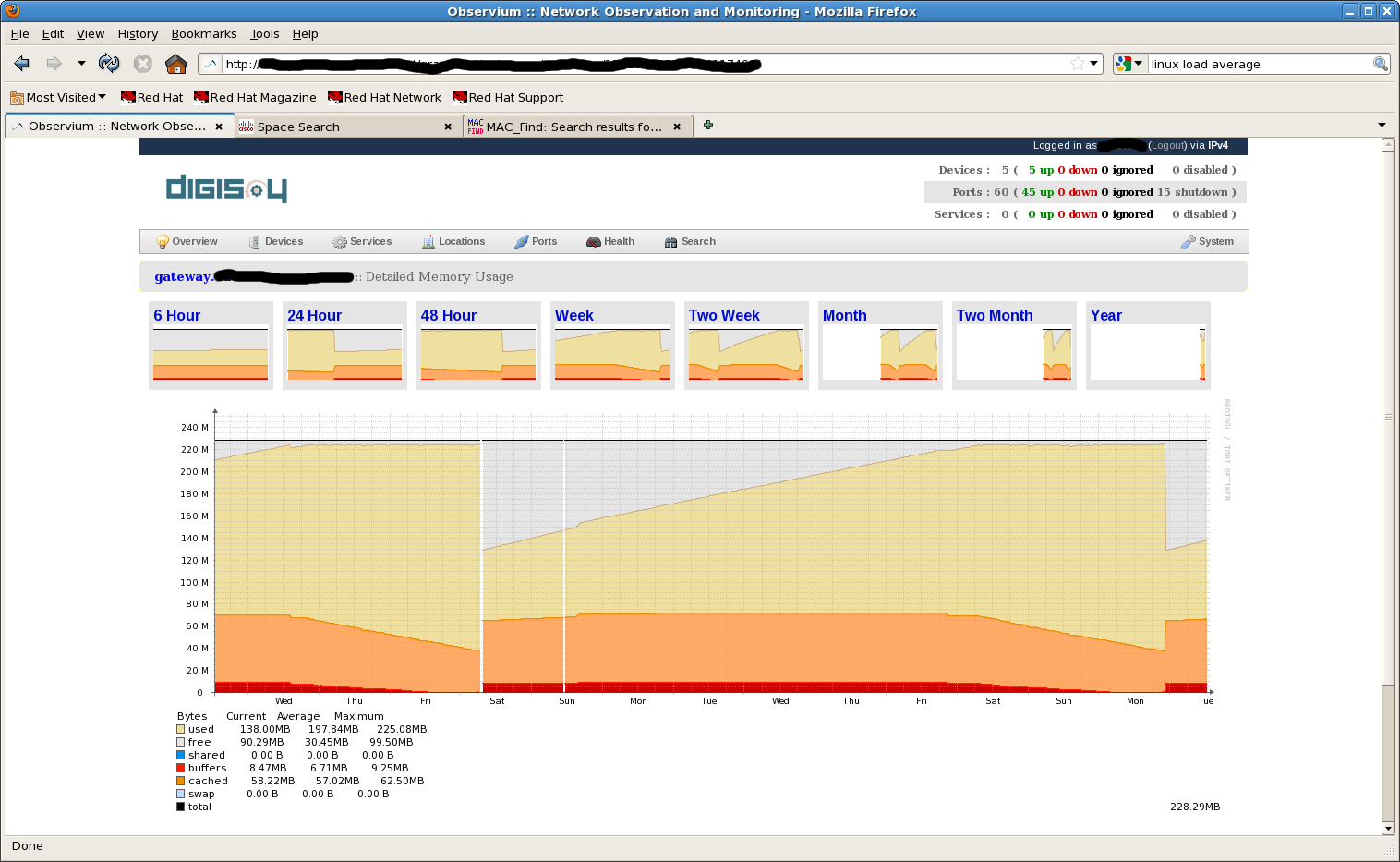 I have replied back to your private message with my email address.

Could you please forward the dbglogs. Please note that the file will contains passwords, so please remove/change them before sending the file. You can send the file through private messaging feature on this portal.

One more request if you could get the dbglogs before the reboot occurs, say Monday evening, that will be helpful.

Rising star
In response to nmanglik

Hello Metachimp, thank you for the reply.

With the SA520, normally it wouldn't be necessary to do the reboot. But in this instance the previous configuration back-up file format is incompatible with the format required for new firmware version SA200-k9-2.1.5.1

Please see the release notes guide that I have attached to this post.

Is there any progress on the High CPU Usage? I see a regular over 90% usage on the CPU, and not a large problem with memory usage, I am using this for a small office, a half dozen people at the very max and its very disappointing the problems we are having. I am having a new issue with the router being unresponsive and blocking traffic to the web but our Point-to-Point VPN  to the main office ASA 5510 remains intact.

I will attempt an upgrade but I haven't seen anything regarding this orginal issue of high CPU usage being resolved.

Participant
In response to Stephen Bush

The latest firmware for the SA500 series is 2.1.51 which should resolve the high usage problem. Please try updating and check to see if this resolves the problem.

Beginner
In response to rocater

Each appliance has a site-to-site VPN to the other 2 appliances.

Is this a known bug within the firmware and will there be a fix soon?

I also have 3 SA520 routers. And they have been nothing short of a  nightmare since I got them. I get constant remote VPN disconnects. And  the main router constantly bugs out and has the CPU running at 70+%  kernel. The only way to fix this, is to reboot it. And it just comes  back again. The Cisco Routefinder series routers they replaced, were amazing and ran perfect for 8 years.

I have had several support tickets regarding it. And I  go through the same "low level tech" experience everytime. In which  they review all the settings, to make sure thats not the problem(which it is not). All  the while, they can clearly see I have already been through this process  a bunch of times. I have done everything from basic troubleshooting to  sending packet captures and dbg logs. And I still have yet to receive  any tangible fix or even a proper answer that makes sense to the issue. If I could go back to November, when I bought these routers. And buy something else, I would in a heart beat.

I am now considering buying a competitors product and taking a loss by throwing these SA520's in a garbage can.

Yes, I have 2 of these SA520 routers just sitting on the shelf, because I had to pay to replace them with a different brand for my clients, as the Cisco reliability was utterly WORTHLESS.  No problems now after switching brands.

I'll probably just ebay them to try and re-coup my loss, no thanks to Cisco.

I cannot believe such a big name in networking has such disregard and distain for their once-loyal customers..

Cisco, will you buy these back?  They are in perfect physical condition, and according to your techs "functioning properly".  Just don't bet your business on it.

I would also like to know if they will refund customers having these issues, because they dont seem to have the capability to repair them. And yet they state they are working perfectly. And they tell me that something on my network is doing it.

However, I went from 8 years of rock solid VPN connections and network stability, and have been reduced to having issues daily with all of our stores. None of these issues existed until the minute I deployed these 520's onto our network. And after all the lackluster support I have received, I will go out of my way to ensure other peers in the IT community do everything possible to avoid Cisco products.

Copying Acer and Dell on their support strategies(low quality/outsourced) will only leave the door open to competitors making a name for themselves. Home users might let you get away with it. But people running businesses won't, its that simple.

Cisco can turn this around by having someone knowledgable contact me, and actually fix the issue. Perhaps a subject matter engineer? Someone has to be able to tell me why the CPU(kernel side, not user) is running at 100%....but yet, they do not.

I'll jump on the wagon to say this "Small Business VPN Router" was the biggest headache ever.  We have a great product from Cisco, a ASA-5510. We bought theSA520 to place in a new remote office. It would constantly drop the VPN, Internet, and every firmware update would only seem to fix unseen "problems" but never the big issues many report here.

We pay for TAC support but there was never anything wrong with the 5510 side, and they refused to support the SA520. The one tech who did look it over found no issue.

We ended up pulling it and getting a ASA-5510, twice the price but it works, and does so flawlessly on the same firmware platform we are familiar with.

As it was put to us, these "small business" routers are nothing more than Linksys consumer grade products not capable of handling a real work enviroment... I however wouldn't wish this thing upon any user, at home or otherwise.

For now it collects dust... if it could even hold a decent internet connection I would try to find a place to use it but that is even flaky. Instead I'll dust off the PIX router and put it to work, that was a solid product too. This SA lineup is a joke.

Beginner
In response to Stephen Bush

Yeah, its odd because the RF660/RF550/RF560's we ran for almost a decade were some of the greatest routers I could have hoped for. Thats why when it came time to upgrade, Cisco came to mind without a second thought. And the crappiest thing of all, is the certified reseller I dealt with, convinced me to buy the SA series, when I actually did want to buy the Enterprise ones(asa I believe). They told me the 520's would handle more then what I needed by far. And that enterprise was not needed.

Then once I bought them, I quickly came to the conclusion that the small business line up is the unwanted red headed step child of Cisco's router line ups. They obviously don't value peoples money, unless the pile is big enough...

I would think having a chain of 8 large building yards would be considered something other then a "small business". Obviously not a massive corporation, but we employ almost 500 people. So it would be nice to be sold routers capable of handling our network. I even went through the trouble of reporting every single device/pc/printer/debit machine etc, so they had a detailed list of my networking needs. And the 520's were recomended by the reseller.

I agree, refunds or atleast upgrades with a fee should be charged to take care of some of the unhappy business customers. Cisco, if you hope you stay big and on top in the future, you need to make good on these kinds of things.

I'm  running a SA520 and I can agree to what you are saying. I work for a business which has 50 pc's and the performance on this appliance is pathetic. It constantly drops internet connections many times in a day. Reboots don't help as it starts doing the same thing not long after.

I have an RF600VPN from Multitech which is running on another network on a static. It has been working flawlessly for 6 years until it developed the swollen capacitor syndrome. I thought that would be the end of it, but being an electronic technical engineer, I replaced them. The RF600VPN has been going strong for the last year.  I bet this SA520 couldn't do that. I wish I never purchased one. Ultimate garbage!!

I'm putting my lan back onto the RF600VPN temporarily until I can find a more robust, reliable, replacement appliance.

Shame on you Cisco.

Beginner
In response to bgorveatt

I started this thread, and I can say that I haven't had any further issues after upgrading my firmware (from the version previously posted).

Beginner
In response to Ed Melendez

I just upgraded my firmware to 2.2.0.7.  I saw the memory usage slowly rise to 65% and remained stable for the last 15 minutes.  I'll monitor it for a few days and see if it increases.  Hopefully it will be stable.