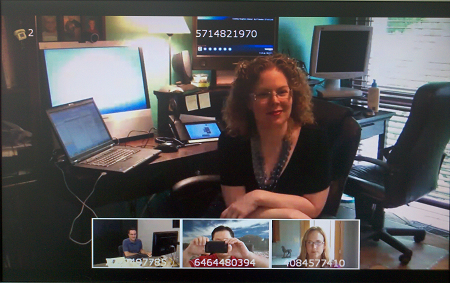 The default layout can be configured either boxwide or per participant. This default setting can be overridden by a participant changing the layout selection using far end camera control or via DTMF keys 2 and 8.

In ActivePresence layout, the loudest participant appears full screen with additional participants appearing in up to nine equally sized overlaid panes at the bottom of the screen.

Only the Equal layout can be sent if there are any multi-screen systems not supporting loudest participant information. The ActivePresence, Single and Prominent layouts all rely on that information.

0 Helpful
Share
Latest Contents
RV345P Is Blocking TLS Traffic
Created by db77 on 04-19-2021 12:52 AM
4
0
4
0
Hi all, I've just installed a Cisco RV345P router in a home office. WAN connection is via PPPoE using a sub-interface on WAN1. MTU is auto. I can ping external hosts (1.1.1.1, 8.8.8.8 etc) and perform DNS lookups via Google DNS ok. Firewall settings ... view more
Bonjour traffic
Created by akanarya on 04-18-2021 02:13 PM
1
0
1
0
Hi,My backbone switch is constantly producing traffic from switch itself to  224.0.0.251:5353 in every 5 seconds.I learned that it is bonjour traffic which i dont need.Therefore i globally disabled bonjour discovery from the switch but i couldnt stop... view more
Cisco SG350-10 reset issue
Created by mattwsrogers on 04-16-2021 02:19 PM
1
5
1
5
Hi all, I'm new here so please be kind!Bought an SG350-10 switch recently to use in my home labI'm setting a static IP on the switch and all is working fine.. I've got this plugged into an older ASA5505 that has no DHCP configured on the port plugged... view more
Firewall rule to block and allow RV130W admin page
Created by EricB1 on 04-16-2021 10:39 AM
2
0
2
0
Hello community.I'm trying to add a firewall rule in the RV130W to block access to the router administration page. I'm also trying to add a rule to allow access from a specific machine. But the RV130W won't allow me to add rules in the same LAN subnet. Ca... view more
RV130W UDP port forwarding issue
Created by reflexivo on 04-16-2021 10:08 AM
2
0
2
0
I set up a single port forward on this router for UDP only and a couple of times it has stopped accepting connections. It seems like somehow it has got "jammed", because if I change the public port number on the rule, it starts working again on the new po... view more
Create ContentLogin to create content
Question or Discussion
Blog
Document
Project Story
Video
Related Content
Discussions
Blogs
Documents
Events
Videos
Project Gallery
Small Business community Righttrail
Cisco Small Business Software and Firmware
Download the latest firmware here
Popular Support Links