One is NOT able to add a port to many untagged VLANs (for igress traffic to be directed into all of them)...

Surecom switches allowed to to this, it was helpful.

Web interface is NOT working with IE8 (though it is said in Release notes, it works with IE5.5+). It works with IE5.5 to IE7 (though there are stilllsome bugs revealling, see below), but not with IE8. If the software gets updated at all the hosts in our LAN, we will not be able to configure the sw...

Msxml is installed (and is of the latest version). We have tested it with Windows server 2003 and IE8, with Windows XP and IE8... nothing helps (we have also disabled all the restrictions on active x). It just does not work.

The sw is completely unconfigurable in UNIX-only environment... as it relies at the M$ client side "technology"...

CLI functionality is very poor as it allows one to configure only some basic parameters (IP address, local users for auth). It does NOT allow to setup VLANs,*STP,any Security features, etc.

When trying to configure the sw using IE6-7, there is a bug showing up when  we  try to  add one port to many VLANs ("VLAN to Ports" page) and press "Save". The port seems to be added to VLANs but the error message is instantly showing  up  which says that some error appeared, but it doesn't know the error ID or the reason. This is really annoying. =) :

We like the sw, but it is so hard to work with it, not mentioning that we have to install M$ Windows to manage it... We'd like to see it working with IE8+ and Firefox (all 3Com and Allied Telesyn sw do!), and we'd like to see more functionality in CLI interface.

And there is another bug: when I set up a port to be Trunk, when after that I create a new VLAN, the port is not associated with it automagically: I have to add it MANUALLY! =) While by definition of the Trunk port type: it is assosiated with all but native VLANs in tagged mode automatically... another way, how does it differ from general mode if I HAVE to add newly created VLANs to it manually? (this is a rethorical question) 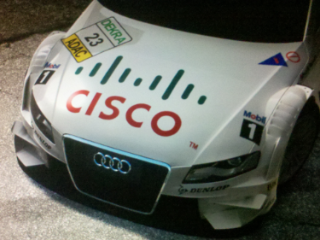 Your issues and concearns would best be addresses by calling into the SBSC and creating a case. The number here is 866.606.1866.

Beginner
In response to chrcoope

One more important problem of the current SRW* switches firmware:

When editing ACLs, one is not able to move around (change their places, eg.) rules in the ACL...

So, it is very incovenient, when you are not able to put some rule in the middle of existing ones, interchange rules' places... you are only allowed to ad a rule to

the end of the list or delete the rule... this is really bad.

I think there is some confusion here, excuse me in advance for going into lecture mode ..

a. Keep in mind that there are TWO VLAN-membership to think of: (1) VLAN membership *of the frame* (which is assigned at ingress)
and (2) VLAN membership of the port. The distinction is important, as you will see blow.

b. While in-transit in the switch, a frame has a VLAN membership but does NOT have a VLAN tag (I am ignoring the double-tagging case here, I know).
a tag will or will not be added at egress, but does not exist indie the switch. Even if the frame came in tagged, the tag was removed at ingress.

d. at ingress, every incoming frame is assigned to ONE VLAN. If it came in tagged, the FRAME will belong to the VLAN specified in the tag, if it came
in untagged, the port PVID will be used. Since a port only has a single PVID, all incoming untagged frames will be placed into a single VLAN. Note this
assigns a VLAN *to the frame*, not to the port. Usually, the port IS a member of the relevant VLAN, but in general mode, you can (and sometimes it
is even useful) to create a situation where the port is NOT a member of the VLAN to which the port's PVID sends incoming untagged frames.

So - you CAN set a port to be an untagged member of multiple VLANs, but this will affect only what happens to outgoing frames.

While we are at it - Access/Trunk/General modes:

By the VLAN standard (used to be called IEEE802.1Q, and now part of 802.1D) the switch admin should be able to (and must)  independently
configure multiple attributes of VLAN handling: Port X membership or not in VLAN Y, If at egress this combination will or will not add a tag, if
to check that incoming frame and port both belong to the same VLAN, a similar check at egress, and if to allow an incoming frame to be accepted
if it comes in untagged, or only allow tagged frames.Using the full set you can decide per port per vlan each of these settings. Since this is considered
too complex for us small-fry users , Cisco (and maybe others) long ago created "Access" and "trunk" ports, which are essentially pre-configured

setting-combinations of these. This saves work, but reduces your flexibility. In SRWxxx you have these two pre-configured Access and Trunk modes,
and you also have "general" poret, wheich is the "you can do it all - but you MUST do it all (and correctly)" option.

1) Surecom switches supported adding a port to many VLANs in untagged mode. It might violate standards, but it was helpful.

I may not be right that inability to do this is a bug. Ok, then it's my fault here.

2) On trunk port type: didn't get the point. As I understand it, a "trunk" port must be associated with all but "native" VLANs in tagged mode automatically. Whether I add a new VLAN to the switch, it must be there automatically. Again, I might miss something, still, as it seems to me, there's little help from "trunk" port type if I have to add a newly created VLANs to it manually.

3) On web interface: it works with IE only (it is REALLY BAD (Did Miscrosoft pay Linksys for this?... Seems to be the case)) and does not work with IE8 out of the box.

4) The switch is called "managed", but I didnt' see any capabilities to configure any advanced settings through the telnet/ So, what's the difference from some "web-smart" switch?

You CAN "add a port to many VLANs in Untagged mode" in SRW's. This not only does not violate any

standard - it is in fact *Required* by the standard tobe able to do that.

as you want, and for each decide if it is tagged or not. (so you can have 10 Tagged

and 10 Untagged VLANs, all on the same port). As I said, this is an EGRESS-ONLY

The problem is that I am not sure this will do what you want.In your original request

you said (as I recall) : "I have a server with a single NIC only capable of sending out

untagged frames, and I want it to be in several VLANs".

But this can be problematic ragardless of which swith you use:

Note this entire discussion is true for ANY VLAN-aware switch, regardless of model and
vendor. SRW has nothing special here, for good or for bad.
(Actually, I take this back - some switches only have Access and Trunk modes,
and there you will not be able to have more than one untagged VLAN on a port,

SRW does provide you with full control when you need it)

address on port A in any VLAN to which Port A belongs, so regardless of which VLAN
the response comes in on, it will always be sent to Port A, as expected.)

As for "Trunk mode" - this is a gray-area, matter-of-taste thing. There is no standard
for this.

(many Admins do not like invisible side-effects, and the "catalyst way" means that if I set a port to

trunk-mode now, and create a VLAN next week, it will silently becomne a member of that VLAN
then - which will not be a visible effect at the time)

The "managed" as opposee to "web-smart" names  - don't you love marketing?

Thank you for these very good posts.

If you are not against it, I'd like to put here a few words.

First, on the "vlan" question. The detiled description you gave is helpful. Somehow Surecom switches allowed adding a port to many vlans for both ingress and egress traffic in untagged mode. Believe it or not. =) It was useful. Linksys sw does not support it, and let it be, let the question be closed.

Next, more important, on the trunk port type. Nobody likes "side effects". It is not a "grey area",
as you think it to be. It is really inconvenient and makes not much sense
to add newly created vlans to a trunk port manually.

On CLI interface: it's functionality is poor. It is too poor for the switch to be called "managed" (and I do not think this is a "grey area", "matter of taste"). If I am right, a "managed" switch by definition must allow all the functionality be configured using CLI... The discussed one (with current firmware) allows only IP setting and some basic port managent. No VLAN management, etc.

And finally, not the least important, on ACL editing: it is impplemented in a very inconvenient manner,  see arguments above.

Thanks to this forum (or not?), Cisco started making a new firmware for these switches [https://supportforums.cisco.com/message/3103963].

Anyway, thank you for your answering
and best regards, Leonid.

I'm having the same Web Interface problem. I have tried using IE 10 and I cannot get this Web interface however when I try on IE 7.0 it seems to be working. I though cisco would have sorted this out by now.

Beginner
In response to onyangoliech

you are almost certainly not having the same problem Leonid had three years ago, At that time IE10 didn't even exist, and the small business switch software has changed very much since then. So you'd be better off starting a new discussion for that, and be sure to include the version number of the software your switch is running.