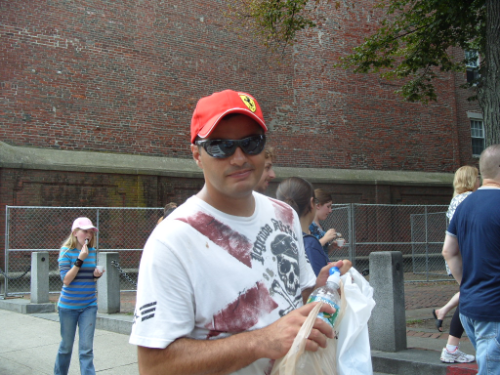 WAP4410n it's not working as a repeater.

I bought a new WAP4410n a few weeks ago. Since then, I had tried different ways of configutarion to make that WAP4410n works as a repeater to my WRVS4400n v2. Both are running the lastest firmware available by cisco. I made the WAP4410n a mirror of my router, setting up WAN, LAN, Wireless, etc. The best few success moments I had was that, my network working very well, all the computers are seeing each other, and there is internet available by my repeater. All that works just for a few moments or minuts approximately 2 or 3 minuts. After that the internet drops down in my repeater and also the comunication in my network ( which means.......router network with repeater network).

Things that I had tried:

Static and automatic IP for WAN and LAN respectively router and repeater;

AP Mode as Wireless as wds repeater and Wireless Client/repeater (performing a site survey in both case);

Please I need directions, solutions and steps by steps in detail.

I'm really sad with the whole thing, and I'm hoping that will be solved.

Thank for your time,

What worked best for me (although in my case I have a wap4410n repeating the signal from a wap4410n ap) is the following:

1. Connect the wap4410n repeater to the router using a cable connection and give it a static ip address.

2. While still connected via the cable, enable browser (wireless) admin access to the wap4410n repeater.

Beginner
In response to John Frankish

Thank you for your help !

I just tried a few minuts ago , and still the same problem. Everything is running nicely and them suddenly stop. If I reboot the system, it happen again, the same. Start works and stops. For some reason the repeater is lossing comunication with the router. I can see the ip of the repeater in the router, but when I ping the ip, there's no answer. If you have some idea about this, give me a shout !

Talk to you later,

Rising star
In response to iwodaleocisco

Hi, My name is Eric Moyers. I am a Network Support Engineer in the Cisco Small Business Support Center.

You may have some other underlying issues, It may be best to call into our support center and allow one of our support engineers to assist you. Please call 1-866-606-1866.

Beginner
In response to Eric Moyers

Have a great day !

Beginner
In response to iwodaleocisco

How did it go? Did you call Cisco support and got the repeater function up and running stable?

If yes, may I ask what the trick was?

Many thanks in advance

Beginner
In response to ankerhansen

Hello Anker ! How are you doing ?

Yes ! I did called to the cisco support and what happened was...

I gave to them remote access to my network. So, it was performed a few tests to make sure if the router and receiver have the same SSID, and stuffs like that (If you need details, just ask me later). Then, after all, the repeater kept the comunication with the router, it was performed IP ping test for many time, after a couple hours, no problem so far. But here is the problem. Both devices had a distance between 12 feet while the test and configuration happened. Witch means, a short distance. Another important fact is, even with the comunication between both devices were fine, I couldn't know witch one my laptop was connected. Because both had the same SSID. After this, I moved the repeater for approximately 20 to 25 feet, and the repeater was unable to connect at my router. So, as far I can say, It didn't work at all.

After all I still need some support to make it happen. But I didn't have time to call again to the support.

As soon I find some time I will call again.

Please if you need some details, I'll be around, and let me know if you have the same devices and what had you done !

Talk to you soon,

Rising star
In response to iwodaleocisco

The way to test if your AP is repeating or not is to give it a static IP and ping that IP.