Cisco Community present at Cisco Live EMEA 2023. See you in Amsterdam! Learn more.
Turn on suggestions
Auto-suggest helps you quickly narrow down your search results by suggesting possible matches as you type.
Showing results for
Search instead for
Did you mean:
Start a conversation
Options
3065
Views
0
Helpful
4
Replies

Can someone clear this up for me please.

However my platforms team are telling me I create a ISCSI VLAN on the core network and link it into the SAN switch via a trunk so that the ISCSI VLAN is seen from the commercial network. This doesn't seem right.

Can anyone shed some light through their own environments?

What kind of SAN are you planning to install?

I would keep ISCSI and LAN traffic physical seperated unless you're using Nexus switches. Why do you want the ISCSI network reachable from networks outside the server network?

If your only interested in management I'm certain that your ISCSI SAN has an Out-of-Band management that you could route however you like since it does'nt use Jumbo Frames.

If you do want to access your ISCSI resources from other networks you should be aware of performance issues that will occur if you're not running Jumbo Frames on all networking equipment along the chain.

Beginner
In response to m.junghage
Options

Hi,  thanks for the response.

It's a HP left hand SAN P4000, P3000 and a 10G HP switch. Before you ask I'm a Cisco man and manage a Cisco infrastructure, this is our first venture into something non Cisco, I always get more sense from this board..

There is one CAT5 connection from the HP switch to our core switch which is configured on VLAN 200 and acting as a trunk port between the HP SAN Switch and our core network.

It's the last point that doesn't seem right to me? Our platforms guys are saying this is correct ad they need to manage the ISCSI network via the commercial network and this is the only way to do it?

Is a VLAN separation enough for SAN ISCSI separation?

I have a similar problem. Did you find any solution? 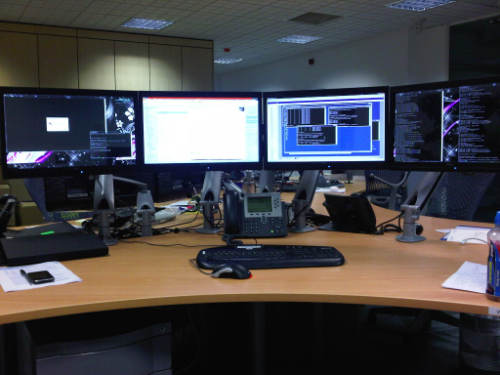 In a previous life I deployed a 1G iSCSi environment on a pair of 4507E+R chassis using a seperate iSCSi VLAN.

All other traffic was managed on the same core switches without any problems.

Each SP was dual pathed to both 4507's for both iSCSi and server VLAN traffic.

Port-channels created on the 4507's for throughput.

I'm currently working on a new solution to integrate the following:

This will interconnect to a Cisco 4500-X 10Gb switch using TwinAx cables (cheaper than SFP modules).

However this is not straight forward as EMC to Cisco & HP adapters to Cisco require passive or active cables...of which I cannot find any white papers on to verify.