Welcome to the new Cisco Community. LEARN MORE about the updates and what is coming.
Turn on suggestions
Auto-suggest helps you quickly narrow down your search results by suggesting possible matches as you type.
Showing results for
Search instead for
Did you mean:
Start a conversation
Options
580
Views
0
Helpful
6
Replies

Scenario:  Two buildings connected with a private leased fiber line, so it does operate as a LAN.  There are several subnets and everyone at both buildings needs to be able to access all subnets.  However the physical machines on those subnets are building specific:

I've got a basic knowledge of adding VLANs, VLAN interfaces and a static routes.  The part that I'm getting confused on is that the Building 1 core router needs to make its default route to the firewall (and on to the internet) but "know" that traffic on vlans 10 and 30 gets sent across the fiber line to the other router.

So I'm assuming this gets done with some combination of vlan definitions, vlan interfaces and static ip routes on each router, but I'm not sure if I'm missing something.

Beginner
In response to obrienw264
Options

from what i understand, you want 3560#2 to perform intervlan routing. this can be done by "ip routing" command.

you can also refer to this document.

you may also need other commands for the design to work, depending on the existing setup/configuration you have. 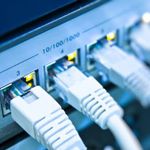 You can do a "no switchport" on the interfaces inbetween and then configure them as router interfaces. THAT WILL CAUSE DOWN TIME though so be aware of that.

- Be sure to rate all helpful posts
0 Helpful
Share
Reply

Beginner
In response to schaef350
Options

Thanks Adam.  I think the "no switchport" / routing interface is what screwed me up in the past; I was trying to switchport trunk everything.

Do I need to define the VLANs and VLAN interfaces for all VLANs on both switches or just their respective ones:

B) Just their respective subnets:

Beginner
In response to obrienw264
Options

Be sure you know what everything is doing before attempting to implement of course.  Try on lab gear if you have that option...

You can do what ever you want for IP addressing over that link.  I just used a 10.5.0.0/30 as an example.  You may want to keep that subnet for future VLANs on one side or the other...

- Be sure to rate all helpful posts
0 Helpful
Share
Reply