Cisco Community
English
Register
Login
RegisterLogin
Options
Turn on suggestions
Auto-suggest helps you quickly narrow down your search results by suggesting possible matches as you type.
Showing results for
Search instead for
Did you mean:
298
Views
5
Helpful
5
Replies
Highlighted

I have two sites that are several miles apart. They have a fiber (VLAN12) connection between them on the Layer 3 switches and a Microwave (VLAN11) shot between one layer 2 switch and the layer 3. One location is the access to the internet. Is there a way to make a failover through the Microwave if the fiber goes out. 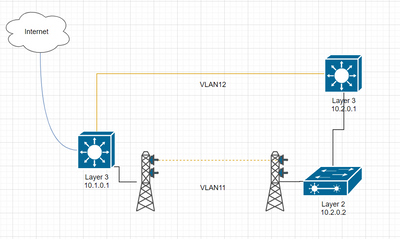 Labels:
I have this problem too
5 Helpful
Reply
5 REPLIES 5
Highlighted

You make the microwave path a new VLAN, and then route across it.  (You'll need to extend this new VLAN to both L3 switches.)

The Microwave path has its own VLAN already. I've never done anything like this with Cisco. Is there an example somewhere I can look at for configs?

VIP Expert
In response to tombstone1

BTW, did you revise the diagram from your original post?

Assuming there's also a VLAN for the 10.2.x.x network, you'll either need an access port on the switch to connect to a different port on the router, or you'll need to change the right router's (10.2.0.1) <> switch link to a trunk and configure the router physical port with subinterfaces.

Whether you use a different port on router and switch or subinterface, the router will need an interface in VLAN 11, e.g. perhaps 10.1.0.2.

Once the second VLAN, VLAN 11, connects both routers, you'll have dual paths.  Then you just route between them, as desired.  This might be done using static routes, as suggested by Reza, or you can use a routing protocol.

Since you'll have two L3 paths, it's up to you to decide whether to make one primary and the other secondary, or use them both (normally equally).

If this is unclear, please ask further.

As for examples, much depends on how you're actually configured now, and how you want to use both links.

Yes I updated the diagram. Thought it might help to understand a little more of what the network was like. I will try your suggestion.