Cisco Community
English
Register
Login
The War in Ukraine - Supporting customers, partners and communities. LEARN MORE
RegisterLogin
Options
Turn on suggestions
Auto-suggest helps you quickly narrow down your search results by suggesting possible matches as you type.
Showing results for
Search instead for
Did you mean:
2742
Views
0
Helpful
9
Replies

I am curious what the best way to handle connections to customers on a switched network where we deploy root guard. I have inserted an image below of an example of what our switch network looks like. We provide redundant layer 2 drops to a customer from different L2 switches, and they connect to us using a switch. We run RSTP using Cisco switches, and the ports are in access mode. The problem is that their redundant port is being put into a broken state due to root-guard. Please see my questions/comments below the picture. 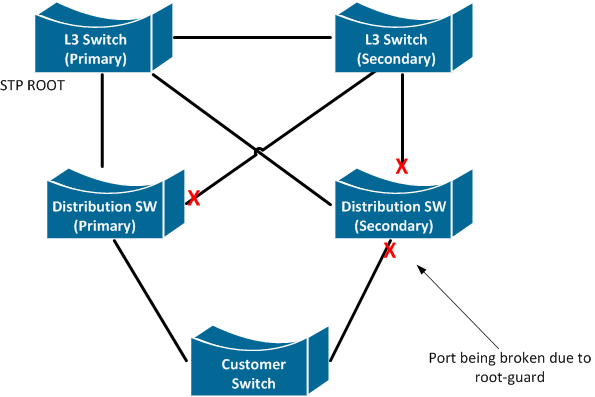 You dont say what stp mode you are using the nevertheless I am assuming its pvst.

I would also enable errdisable recovery which will let you know when there is a problem with the port for the specific cause and can automatically try to reenable the port if the problem is corrected.

Please note in RSTP
Backbonefast/uplinkfast are not required

Customer switch may run STP with your network. They can configure max. switch priority on their switch.

We are running RPVST throughout our switches. Customers manage their own equipment however, so we have no idea what they are running (and often, neither do they).

Most of what you suggest we are already doing, but I don't see why we would want to do this part:

I don't see the reason for doing that. Since we control all of our switches, we ensure that the L3 Primary and Secondary switches are set to the proper priority's. So there is never a chance that one of our Distribution switches will try to be root. And blocking the port on a downlink to a Dist versus on a downlink to a customer port does not seem to gain us anything. Also, with root-guard on the customer-facing ports, those incorrect BPDUs would never make it upstream anyway.

Those errdisable commands are helpful I agree, but not in this particular example. WIth BPDU Guard, the port either needs to be manually re-enabled or you use the errdisdable recovery like you mentioned. In Root Guard, it will happen automatically as stated in the section "What Is the Difference Between STP BPDU Guard and STP Root Guard?"

I also think that those erridisable commands in this case would not help, because the port is not being put into errdisable mode, it's being put into STP broken mode. At least based on the output of the show interface / show spanning interface commands, the output is different.

But none of that helps me address this paritcular problem with the customer. I will find out if they are running STP at all, because I don't think they are. But if they do, won't their switch continue to send our low-priority BPDU's back to us? Or should their switch put one of their ports into blocking mode, thereby preventing that from happening?

Okay misread your post - But what are you asking that you haven't already done, It seams you have setup all the relevant protection  on the devices you manage?

Root-guard is doing its job as intended and making sure your distribution switch ports on the customer interlinks  dont become root ports, which  means your distribution ports are seeing bpdu's with lower stp values.

What can be done?

Sorry, I could've worded my question a bit better. Is it really just as simple as having the customer enable STP? What if they are running 802.1D and not RPVST? I ask because I had a customer enable STP and his primary port went into blocking on his side, while apparently his secondary port stayed in broken mode on our side, taking his environment down. What I had read was that root guard will lift the broken condition the instant lower priority BPDUs stop coming through, but it apparently did not do that. So I was thinking there must be more to the equation, or some best practice I am missing.

I have asked the customer to schedule a window with me so we can make the change together, so I can see what happens.

Thanks for your responses.

What if they are running 802.1D and not RPVST? - then the distribution switch connected to the customer switch will fallback to pvst mode and go though the slower  listeniing/learning/forwarding states of pvst for that interconnect link

So basically you would want to have this enabled on the distrubution switches towards the customers switches as you dont want the customer switch ever becoming a designated port for that lan segment.

FYI -The Bpduguard  feature acts to any stp activity arriving on a port that it shouldn't be there.

Sounds like I just need to work with customer on getting STP enabled and make sure their secondary port gets moved from broken to forwarding. For some reason I thought it was more complicated than that.
Ask them to enable stp  (RSTP if applicable) with a higher stp bridge priority than the default.

Participant
In response to Musab K

Looking at the topology above BPDU Filter wouldn't be the smartest idea, would it?

One could try to configure the lowest possible bridge priority on the root bridge, that would at least reduce the possibility of a rogue switch trying to take over root.

Beginner
In response to pille1234

In this case the Distribution SW (secondary) is seeing the root BPDUs being sent down to the customer from the Distribution SW (primary), so just lowering our root priority wouldn't do anything. Sounds like I just need to work with customer on getting STP enabled and make sure their secondary port gets moved from broken to forwarding. For some reason I thought it was more complicated than that.

Latest Contents
OSPF for CCIE Enterprise and Infrastructure Exam
Created by Meddane on 05-13-2022 02:24 AM
0
0
0
0
The ultimate is coming.
Cisco Champion Radio: S9|E18 CC Unfiltered: Becoming an Expe...
Created by Amilee San Juan on 05-11-2022 12:57 PM
0
0
0
0
Listen: https://smarturl.it/CCRS9E18Follow us: https://twitter.com/CiscoChampion Reaching the height of your career is no simple feat. It often requires a combination of pursuing the right education, building the right professional network and being ... view more
SD-WAN and NAT Types
Created by Meddane on 05-08-2022 01:44 AM
0
0
0
0
In a typical production SD-WAN deployment, we would probably have many remote sites connected via many different Internet connections to a centralized data center or a regional hub. In most regions in the world, Internet providers will always use some typ... view more
Introducing the Cisco AI Networking Chatbot
Created by skadir on 05-06-2022 09:11 AM
0
5
0
5
The Cisco Networking Chatbot leveraging artificial intelligence to answer top networking questions is now LIVE! Read more about it and how it works in this Cisco Blog by Prasad Chebrolu.
Cisco Champion Radio: S9|E16 Protect Your Network from Count...
Created by Amilee San Juan on 05-04-2022 11:25 AM
0
0
0
0
Listen: https://smarturl.it/CCRS9E16 Follow us: https://twitter.com/CiscoChampion  For all end-users across Cisco’s ecosystem, counterfeiting presents serious risks to network quality, performance, safety, and reliability. It is dangerous becaus... view more
Ask a Question
Create
+ Discussion
+ Blog
+ Document
+ Video
+ Project Story
Find more resources
Discussions
Blogs
Documents
Events
Videos
Project Gallery
New Community Member Guide
Related support document topics