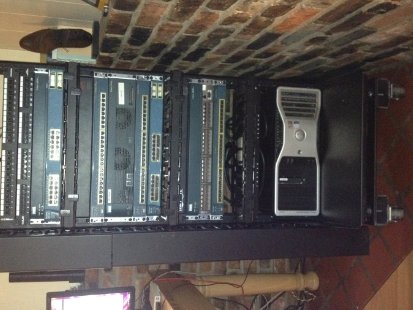 I hope this is a simple one...We have a pretty flat network. Native vlan, and vlan 15. Until now vlan 15 only exists on the core switch.Im adding a L2 10gb switch for San traffic. It is configured for native vlan and 15.

I have a .1q trunk between them and it's up and up, all vlans allowed.

Please make sure vlan 15 is really configured in the switch and a device is connected to a port belonging to vlan 15 using the command  show vlan brief.

Beginner
In response to Carlos Villagran

The vlan is on both sides. The trunk visible and the access port the laptop is plugged into is vlan 15.

Is your SVI in up/up state?

Okay here is the go:-

1- Vlan 15 at both the ends are on the same network.(PC vlan ip address and L3 vlan on layer3 sw). Vlan showing as active and healthy at both the switches and respective ports are showing as part of the vlan(show vlan id 15 is the cmd to verify).

2- show int trunk -> show vlan 15 on the trunk link and in forwarding state not pruned.(Basically i mean STP checking) & also vlan 15 is not the native vlan on either of the switches.

++Could you check if  interface vlan 15 of L2 is pingable from L3 switch? ( configure same network int vlan 15 on both the switches and see if those are reachable).

a- PC ip address along with subnet mask.

c- Trunk interface configuration from both the switches.

Thanks - it will be tomorrow morning.

Also the switches involved are a 3750x stack running LAN base and Dell n4032f stack.

I have gotten this figured out. It turn out Dell switches do trunking in quite an odd way. It turns out that I had to use what they call a General port. The general port is a trunk will allow untagged and tagged packets. I also had to specify that the vlan 15 packets were going to be tagged. The command that got it going was:

Latest Contents
Online +1-412-447-1972 Bitcoin Support Number (Phone, Deskto...
Created by bitcoininvestor31629 on 12-03-2020 06:57 PM
0
0
0
0
Guys, are you waiting for bitcoin wallet phone support number? If yes, then your wait is over as bitcoin wallet customer phone support has been launched to provide you best in class customer support for any kind of bitcoin wallet issues and problems. All ... view more
Network Switching Operation
Created by CiscoNet Solutions on 12-03-2020 05:57 PM
0
5
0
5
The primary purpose of a switch is to make forwarding decisions based on destination MAC address. The MAC address table is created with a list of destination MAC address for each connected device. In addition the switch port assigned and VLAN member... view more
Cisco Cloud Switching (Nexus 1000V) Fundamentals
Created by CiscoNet Solutions on 12-03-2020 05:49 PM
0
5
0
5
Cisco Nexus 1000V cloud switch is a virtual appliance. It provides integration of physical and virtualized network infrastructure. Cisco Nexus 1000V switch is compatible with VMware ESX and vSphere (ESXi) hypervisors. There is a version for Microsoft Hype... view more
Cisco Packet Tracer vs Emulators
Created by CiscoNet Solutions on 12-03-2020 02:06 PM
0
0
0
0
Selecting the proper lab training platform is fundamental to preparing for CCNA certification. Cisco CCNA is a foundational networking certification that requires knowledge of IOS configuration of multiple protocols. So where do you start and what lab tra... view more
Use Serviceability Features to Troubleshoot your Cat9K as a ...
Created by Cisco Moderador on 12-02-2020 06:34 AM
0
0
0
0
(view in My Videos) “Use Serviceability Features to Troubleshoot your Cat9K as a Cisco TAC Engineer” This event took place on Tuesday 1st, December 2020 at 10hrs PDT  This event provides an introduction to the main Cat9K serviceability features. Serv... view more
CreatePlease login to create content
Discussion
Blog
Document
Project
Video
Related Content
Discussions
Blogs
Documents
Events
Videos
Projects
Content for Community-Ad