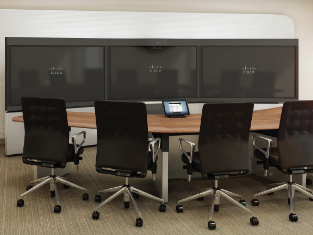 They believes this are lot of ports to be opened on the Internet FW which can be a high security risk.

Is there any way we can use few ports instead of the large number of range?

Have anyone encountered any security risk opening this port range?

Is there anyway I can convince the security team that this is a safe way and they will not have any security challenges with this approach.

Labels:
Everyone's tags (4)
1 person had this problem
I have this problem too
0 Helpful
Reply
4 REPLIES 4

its implications depends on traffic you have in your enviornment. i remember a case where customer modified the sip port range which stopped presence to be shown on endpoints .

I am not really sure where they see the big issue.

Voice / Video over IP (h323/sip) is a very chatty protocol, yes, so many ports needs to be open,

This is used for media connection (udp) and parts of signaling (h323).

does not need to be open from the out to the inside.

If a port is used then its fine, if its not used it will simply not be used. If you want to have

in the application it does not really matter if its one or dozens of ports.

Ports also changed in between versions, especially towards X8.1, so I would already prepare for that!

your firewall needs to allow an answer back in, but I can not really picture that if you have

a firewall team that you do not have a stateful firewall.

Limiting the ports can be a problem if you have a lot of calls or sip messages, as they need ports for this

communication. A single call can for example use a two digit number of ports.

So your ports do not look 100% correct anyhow. Which vcs version did you initially start and upgrade with,

what do you have currently running and what do you think these port ranges do and where did you take them from?

Yes, tell them that you are only opening the port range to the single IP address of the expressway box - not multiple destinations.

All the ports are handled by the same application... so opening 1 vs 100 it doesn't really change the security exposure because it's all to the same service.

The reason the range is large is two fold

2) The standards for H323 and SIP require the use of dynamic ports in the unrestricted range.  The port range is not the same for all implementations or vendors because it is not standardized on WHICH ports to use.. just that it should be the unreserved ports.

The safety comes because the Expressway works as your application level proxy... you expose IT to the outside world, so you don't expose your internal elements directly.  Unlike a webserver, etc...  H323/SIP traffic is not restricted to reserved, defined ports.

3 Helpful
Reply
Latest Contents
UCCE Admin Script that sends an email
Created by leftovers on 01-24-2020 12:27 PM
0
0
0
0
Is there a way in UCCE with using an admin script maybe using the email application in Call Studio to send out an email? I know in UCCX you can send out an email if the script were to fail but is there a way to do it in UCCE? Any help would be great!
Cisco CME lab on Packet Tracer 7.2
Created by vince.castro on 01-23-2020 06:01 PM
0
0
0
0
Fun lab with Packet Tracer and running Cisco CME with 3 ip phones, 3 laptops, 1 switch, and 1 router.  Fun lab with repetition.  You will be able to test your phones and laptop for connectivity etc. Solution;see attached CME Packet Tracer L... view more
Issues after Moving microsoft ldap directory to openldap(Okt...
Created by raghav0122 on 01-23-2020 09:18 AM
0
0
0
0
We are testing this is our lab. When we sync users with OpenLdap we ger userID as xxx@xxx.com but when we sync with MS Active directory we get user ID as xxx.Does anyone have this issue?
How to Assign IP Address to UCS C Series Server Management P...
Created by Abdul Jaseem VP on 01-23-2020 07:33 AM
1
5
1
5
How to configure IP Address for Cisco Integrated Management Controller CIMC. The Cisco Unified Computing System (UCS) is a data center product composed of computing hardware, virtualization support, switching fabric, and management software. The underlyin... view more
UCCX 12.0.1.10000-24
Created by Saima Harris on 01-22-2020 07:28 AM
3
0
3
0
QuestionHi Team,I just need to confirm if we change NTP servers on UCCX, will it affect the license on UCCX 12.0 ?Do we need to re-host after updating NTP?Already done on CUCM and CUC , and it didn't affect but not sure for CCX. Thank you  ... view more
CreatePlease login to create content
Discussion
Blog
Document
Video
Related Content
Discussions
Blogs
Documents
Events
Videos
Content for Community-Ad
FusionCharts will render here