I created LDAP server to pull data from mongoDB instead of AD (for specific reasons).

when trying to sync i receive the following error in the logs (which i cannot attach due to CUCM living in offline system):

From the logs it seems it is sending an empty DN

When trying to search data from the server manually with linux 'ldapsearch' tool i do get the entries..

example from test of ldapsearch: 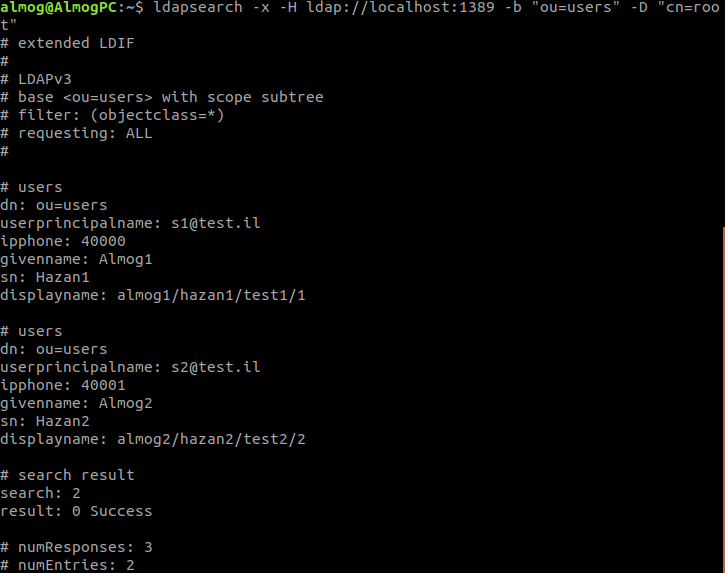 CUCM has support for these LDAP servers.

OpenLDAP and Other LDAPv3 Types

Beginner
In response to Roger Kallberg
I’m in the last category, although I have 4 other directories which are
Microsoft AD. Is it possible to set this server as “other” and the other 4
as Microsoft AD?

Beginner
In response to Almog6666
I’m in the last category, although I have 4 other directories which are Microsoft AD. Is it possible to set this server as “other” and the other 4 as Microsoft AD?
0 Helpful
Reply

Latest Contents
CUCM 12.5
Created by SMW on 10-19-2020 02:06 PM
3
0
3
0
Hi, we would like to use an Cisco Business Edition 6000 and we have all licenses. Do I need a special router to add the sip trunk from my ISP or can I add it directly to CUCM ? BR Sebastian
Deployment Guide for Cisco Webex Hybrid Message Service and ...
Created by msimrin on 10-18-2020 09:00 AM
0
0
0
0
I have questions from the above  guides:   A company currently has two different UC environments.  One in the US and one in the UK.  The US UC environment has (3) CUCM servers (Publisher and 2 subscribers), (2) IMP servers (P... view more
What is IP Telephony?
Created by BrittanyWell on 10-14-2020 10:07 PM
1
0
1
0
IP telephony   (Internet Protocol telephony) is a term used to describe technologies that use a variety of protocols to exchange voice, fax, and other forms of information, traditionally carried over the Public Switched Telephone Netwo... view more
CUCM Upgrading Device Load (Phone Firmware) on TFTP Nodes On...
Created by L.K. on 10-14-2020 05:45 AM
0
10
0
10
SymptomsCUCM Cluster with either:Dedicated TFTP nodes (TFTP1 & TFTP2, Primary & Secondary)Only certain nodes within cluster running TFTP services.Requirements to upgrade specific device phone models with new firmware load version.DiagnosisLimit lo... view more
Unable to receive incoming calls from CUBE SIPv2
Created by orlandoramos1 on 10-13-2020 04:54 PM
2
0
2
0
We now seem to be having incoming calls issues as I have mentioned to you last week. It seems that CM appears to be answering with 404 Not found from 10.0.4.126 and then CUBE tries again towards 10.0.11.11 which is rejected also with a 404 Not found messa... view more
CreatePlease login to create content
Discussion
Blog
Document
Project
Video
Related Content
Discussions
Blogs
Documents
Events
Videos
Projects
Content for Community-Ad