Cisco Community
English
Register
Login
RegisterLogin
Options
Turn on suggestions
Auto-suggest helps you quickly narrow down your search results by suggesting possible matches as you type.
Showing results for
Search instead for
Did you mean:
Announcements
3361
Views
10
Helpful
11
Replies
Highlighted

Cisco ASAv - VTI status and protocol DOWN. Where is the problem?

I want to configure a route-based IPsec VPN between a Juniper vSRX and a Cisco ASAv in my GNS3 LAB. the ASAv version is the 9.8(2) and I read that it supports the Virtual Interface Tunnel (VTI) feature. I created the Tunnel interface but it's both in status and protocol DOWN. Can someone help me to find the problem? I attached my ASAv's configuration. Why is the Tunnel interface DOWN? following my topology: 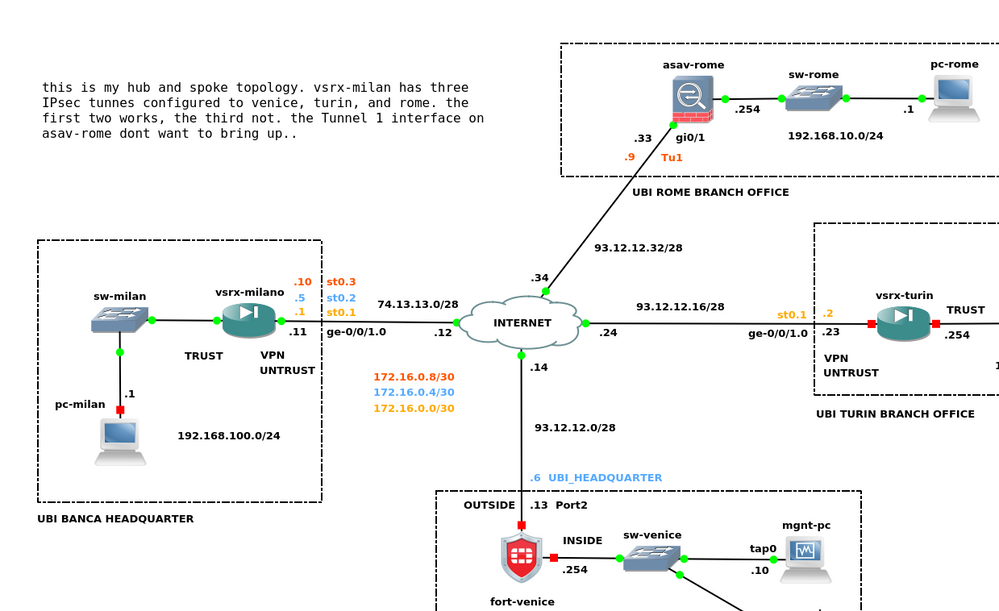 Labels:
Preview file
9 KB
1 person had this problem
I have this problem too
0 Helpful
Reply
11 REPLIES 11
Highlighted

I have a feeling that some parts are missing on your setup. How firewall are talking each other?

Take a look on this link, although the topology is two ASA this can give you a very good grasp.

-If I helped you somehow, please, rate it as useful.-

Beginner
In response to Flavio Miranda

Advisor
In response to AndreaQuerci

I didn´t ask but is it you ASA in routed mode, right?

Beginner
In response to Flavio Miranda

Advisor
In response to AndreaQuerci

Let me simulate here and I´ll let you know.

Hall of Fame Guru
In response to Flavio Miranda

I do not have much experience with VTI on the ASA but do have lots of experience with it on IOS routers. I assume the implementation on ASA is similar to IOS router. The behavior of VTI on router is quite different from the behavior of GRE. My experience, like yours, is that when you configure a GRE tunnel that it immediately comes to the up/up state (if there is a viable route toward the tunnel destination in the routing table). But VTI does not behave that way. On routers the status of VTI depends on the negotiation of the crypto relationship. Until there is a successful negotiation of SA between peers the VTI will not be up/up. So I would take a closer look at the crypto config as a possible source of the VTI down status.

I changed a little bit my topology. I replaced my vsrx-milan with an ASAv firewall. currently my main goal is to see the IPsec tunnel works between the two ASA firewalls. I configured both, but the VTI interface is still in down state: 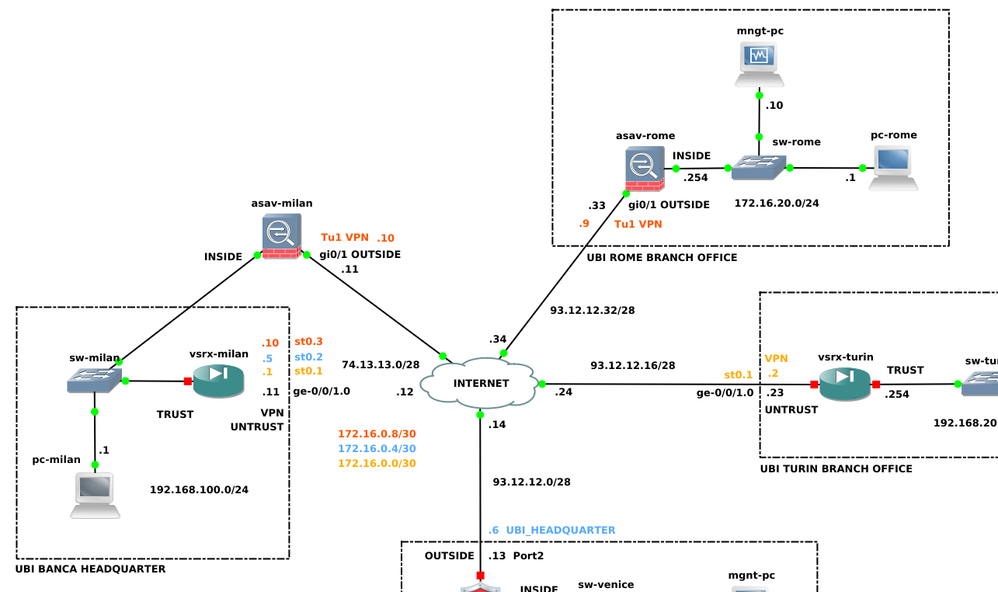 for me it's very difficult troubleshooting an IPsec tunnel between two interfaces in DOWN state. I attached the configurations. let me know if I have done sometimes wrong.

Hall of Fame Guru
In response to AndreaQuerci

I have looked at the configs that you posted and have these comments:

- both ASAv have nat that does a dynamic translation on any traffic from inside to outside. I would think you would want to configure so that VPN traffic is not translated.

- - both ASAv have an object configured for an inside network of 192.168.10.0 and use that network in the inside_in ACL. But there is no other mention of that network on either ASAv.

- one of the common causes of problems in bringing up ccrypto tunnels is that the shared key for authentication does not match. I suggest that you re-configure this and do it very carefully.

- both ASAv have nat that does a dynamic translation on any traffic from inside to outside. I would think you would want to configure so that VPN traffic is not translated.

- - both ASAv have an object configured for an inside network of 192.168.10.0 and use that network in the inside_in ACL. But there is no other mention of that network on either ASAv.

you are right! at the start with my configuration I tried to configure a crypto map, but then I read that it's not used in a route-based IPsec VPN with VTI interfaces. in this configuration we must use the crypto ipsec profile. I deleted the crypto map.

- one of the common causes of problems in bringing up crypto tunnels is that the shared key for authentication does not match. I suggest that you re-configure this and do it very carefully.

the pre-shared key is ok, it wasn't that the problem, I solved it! :)

what was the problem? my inside-acl (how did you say to me) and the routing to the internet. my default static route in asav-milan had a wrong next-hop. because of this, asav-milan didn't reach asav-rome in the public network. now the VTI interfaces are up on both ASA firewalls!!

Hall of Fame Guru
In response to AndreaQuerci

Thank you for posting back to let us know that you have found the problem(s) and fixed them. (plus 5 for sharing the solution with the forum).

Thank you for the comment about the nat. I do see the point that the tunnel is a different interface and so the nat for the outside interface does not impact it. I am so used to thinking that a tunnel goes out a physical interface and so is impacted by nat on that interface, but with ASA it is a bit different.

Beginner
In response to AndreaQuerci

did you manage to establish IPsec btw ASA and Juniper by using VTI interface ?