Cisco Community
English
Register
Login
Welcome Cisco Designated VIP 2021 Class in the 10th Year Anniversary of the Program -- CHECK THE LIST
RegisterLogin
Options
Turn on suggestions
Auto-suggest helps you quickly narrow down your search results by suggesting possible matches as you type.
Showing results for
Search instead for
Did you mean:
Announcements
117
Views
0
Helpful
1
Replies
Highlighted

VPNs Only Work For Certain Subnets 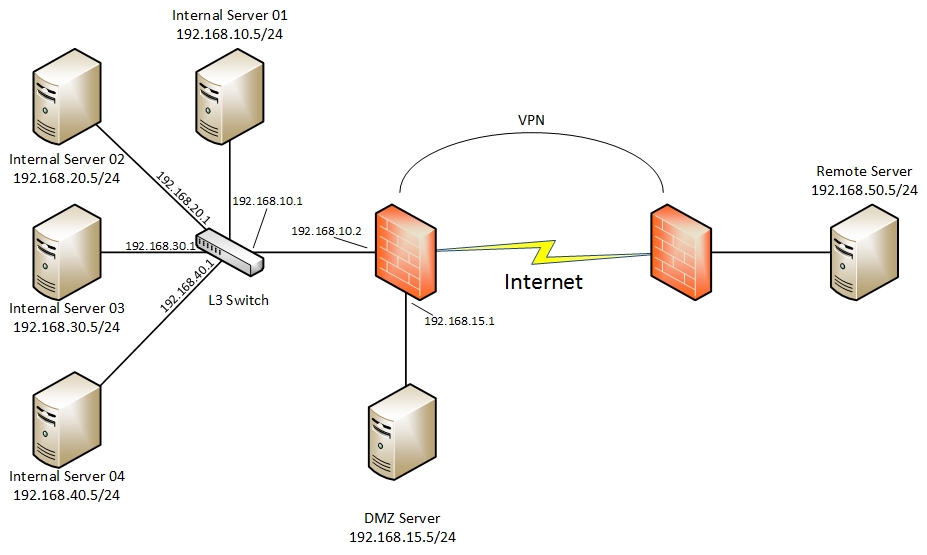 Thanks for your post, I've reviewed your environment as best I can without configuration files being provided. Just to make referencing things easier, lets call the left firewall "FW-A" and the right firewall "FW-B".

Now, from my understanding, you can access the subnet(s) directly connected to FW-A (192.168.10.0 for example) from the other end of the tunnel but not subnets that have their layer 3 residing on the switch? If this is the case, it is more than likely going to be a routing issue.

Please make sure that FW-A and FW-B both have routes to the subnets hanging off of the layer 3 switch. Also, your access control lists and interesting traffic access control lists for the tunnel will need to match this in order for it to work. If you have any issues knowing the correct commands to use, please attach the full sanitised configuration from each firewall and I'll write some commands tailored to your environment. In this case, please don't forget to let me know the version of ASA you are running.Let me know how you get along, I look forward to hearing back.

Latest Contents
AMP for Endpoints: Get started with SecureX Orchestration!
Created by deaguo on 01-23-2021 11:27 PM
0
10
0
10
What is SecureX? Cisco SecureX is included with all Secure Endpoint (formerly AMP for Endpoints) subscriptions. SecureX is a cloud-native platform that aggregates capabilities across your security environment. It’s designed to simplify your environment, ... view more
ISE Secure Wired Access Prescriptive Deployment Guide
Created by hariholla on 01-21-2021 12:41 PM
13
155
13
155
Cisco ISE Secure Wired Access Prescriptive Deployment Guide   Authors: Hariprasad Holla (until June 2018), Mahesh Nagireddy (until Dec 2018)   For an offline or printed copy of this document, simply choose ⋮ Options > Printer ... view more
SecureX and the Evolution of Security Orchestration Automati...
Created by ciscomoderator on 01-20-2021 02:50 PM
0
0
0
0
Meet the Authors Slides- SecureX and the Evolution of Security Orchestration Automation and Response (Live event – Wednesday, 20th, 2021 at 10:00 a.m. Pacific / 1:00 p.m. Eastern / 6:00 p.m. Paris) This event had place on Wednesday 20th, January 202... view more
Cisco Endpoint Security Analytics (CESA) dashboard overview ...
Created by Jason Kunst on 01-19-2021 12:35 PM
0
5
0
5
The following guide goes over the in and out of the Cisco Endpoints Security Analytics Dashboard as an overview and faq page For more information on the product offering, licensing, support, and how to solution (TAC) guide links and more please visit the... view more
#CiscoChat Live: Accelerating your security maturation journ...
Created by Kelli Glass on 01-15-2021 04:48 PM
0
0
0
0
Join us live on Tuesday, January 19 at 10:00 am PT (and on demand after) as we discuss the latest version of ATT&CK and the expansion of TTPs in v8.  As a security expert, you are tasked with protecting your environment. You see the value of... view more
CreatePlease login to create content
Discussion
Blog
Document
Project Story
Video
Related Content
Discussions
Blogs
Documents
Events
Videos
Project Gallery
Content for Community-Ad