i am configuring Cisco vWLC and its working fine ,internet is running smooth

I need to configure Packet fence Captive portal for my company Guest users.Captive portal via self registration and also interconnect with SMS gateway to provide credentials to guest users.

Any techie here install packet fence and any configuration examples have it.

Labels:
wlc1_0.jpg
packet_fence.jpg
2 people had this problem
I have this problem too
0 Helpful
Reply
17 REPLIES 17

Any one ,pls update on it.

We have a working setup using Cisco WLC (wism2) running 7.6.130 with PacketFence 6.3 which works very well.

Authentication is done using webauth on the WLC's with a redirect to the captive portal on the packetfence server. We do not use the SMS authentication but use local users/active directory for authentication in our portal.

This explains the basics of what you need on the WLC as well as in packetfence to interact with the WLC.

I have the same document and configure the cisco WLC according to document. but confused about configuration on packetfence...I am looking for step by step configuration of Packetfence server.

Can you pls share the snapshot of your WLC and Packetfence server.i ll recheck my config.

I'll share a quick overview of the basics from what we have setup.

First, define the packetfence server under SECURITY - > RADIUS on your WLC (in both authentication and accounting). Make sure that you enable support for RFC3576 (this is important! It is used for Radius CoA which packetfence uses to authorize/deauthorize users) As a side note on RFC3576, some WLC versions (atleast <8.x) use port 1700 instead of the standard port which is 3799. If your WLC uses 1700 then you'll need to set this on the packetfence server (see later in this text).

I have two, Pre-Auth-For-WebRedirect which allows traffic to my packetfence portal as well as DNS, DHCP  and ICMP.

Then we have an ACL to allow all traffic called Authorize_any

Define the wireless network you want to use the captive portal with.

Security is handled by MAC filtering (WLC 8.2 and higher can use WPA2-PSK in conjuction with mac filtering if needed).

Configure the Security settings for the SSID as follows 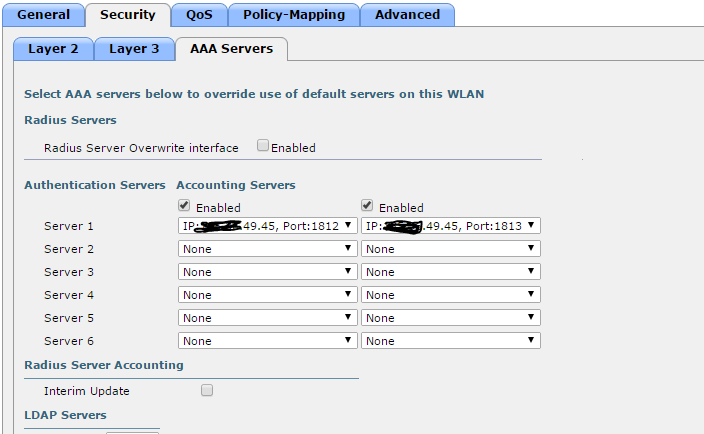 Under Advanced settings for the WLAN you need to make sure that NAC State is set to Radius NAC/ISE NAC (depending on which WLC version you are running. In 8.2 and higher I think it's ISE NAC)

Redirect to the captive portal is handling using the Radius NAC which sends the relevant URL to redirect.

Now that the WLC basics are setup you'll need to start looking at your packetfence server. I am assuming that you have a working packetfence installation (if not, set it up using the documentation on the packetfence.org webpage)

Under Configuration -> Network -> Switches you need to define your WLC's

Note that I have set Controller port to 1700 here since my WLC's are running 7.6 and this uses 1700 for CoA instead of 3799 which is the standard port (see previous comment about this) 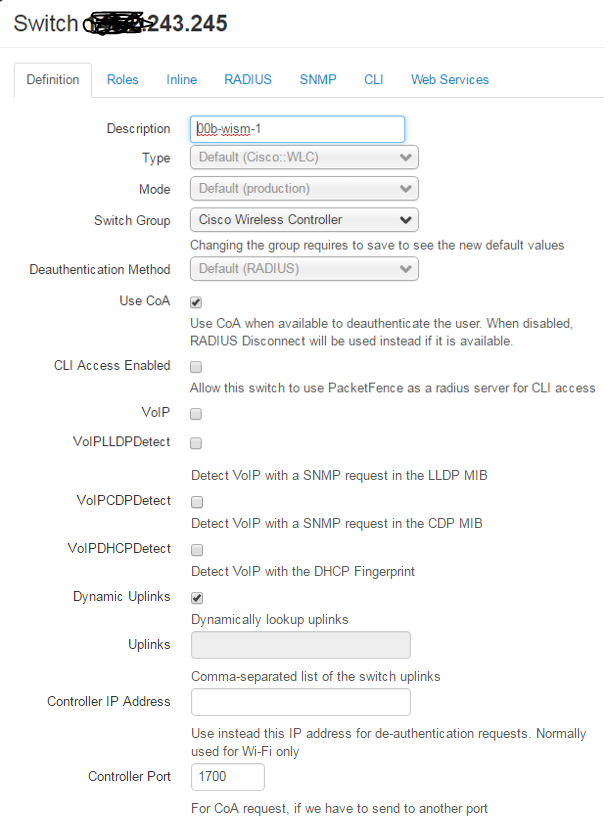 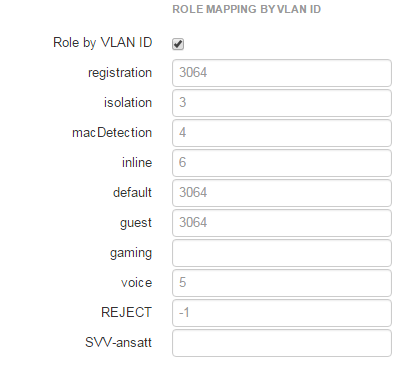 Then you define the ACL's that are used for each role when in that state: 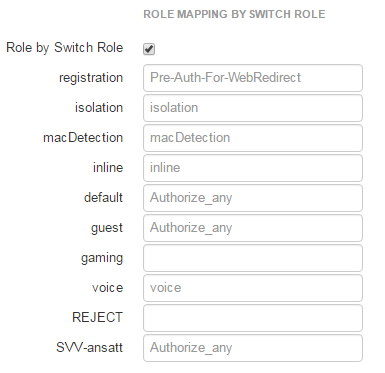 And lastly you define the URL of the captive portal to redirect.

Use in the format : https://yourpacketfence.server/$session_id 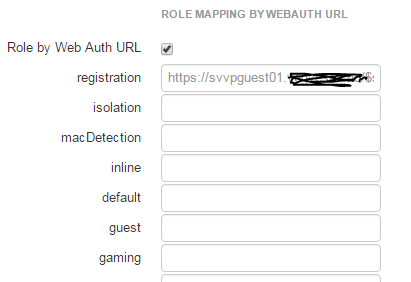 Lastly go to the RADIUS settings on the switch and setup the Radius secret used for packetfence (which you'll use in your WLC to communicate with the radius server).

This should cover the basics. You will also need to configure your authentication sources in packetfence as well as your captive portal. All of this can be found in the packetfence documentation.

i ll apply this config and get back to you. what happened with this config

Good luck! One last thing, if

Good luck! One last thing, if you use a production DHCP for IP assignment you'll need to forward these to the packetfence server.

Packetfence needs to know this so make sure that it's set.

I am also setting up cisco wlc 5508 with packetfence for Guest access.Can you please share your email here i need to discuss more elaboration of the case.

As I'm very busy with my

As I'm very busy with my normal job I'm unable to do support on this. I will ofcourse try to answer what I can here on the forum so please post any questions you might have here.

The documentation provided by packetfence is quite good both with regards to the packetfence and cisco wlc configuration so if you haven't gone through that already I suggest that you do. If you are experiencing any specific issues I might be able to assist though if I've encountered the myself.

I have configured the packetfence according to your guide and but when i go to connect the SSID. its directly connect and reach the internet and not redirected toward web auth page.

i cant find any logs and anything else to troubleshoot. pls check my config which i have shared in snapshot and suggest

I've sent you a message here

I've sent you a message here so please read that. You'll find my email there if you'd like to contact me directly.

Do you have any idea how to integrate WLC using routed network mode in packetfence ?

I have only used packetfence

I have only used packetfence in out-of-band mode (webauth) so I don't have any experience with using it inline in routed mode. I suggest you try the packetfence mailing list or try to figure it out using the available documentation from packetfence.

0 Helpful
Reply
Latest Contents
Enterprise WLAN-Poller Version
Created by mmulla@cisco.com on 01-13-2020 09:46 PM
0
0
0
0
WLAN Poller provides functionality to: Bulk data/debug collection from Controllers and APs. Execute the commands on regular intervals. DFS statistics and debug collection IOS AP Flash health check and memory  AP cert check with generating reports Th... view more
Basic Knowledge about Wi-Fi6 by Understanding the Evolution ...
Created by t.matsudo on 01-08-2020 08:28 PM
0
5
0
5
My report[1] tells you a simple viewpoint to understand the evolution of the wireless LAN from 1997 to the 2020s. You can also get basic knowledge on an uplink of Wi-Fi6, the latest IEEE 802.11ax standard. Data analysis results based on our experimental s... view more
Cisco WLC Application name
Created by rodrigomarques222820 on 01-07-2020 02:50 AM
2
0
2
0
Hello, I was searching but I can't find it anywhere. Anyone knows which application with name 16? I attached picture Best Regards,Rodrigo Marques
WLAN Controller Web-GUI has no APs, is missing an SSID but e...
Created by CiscoSean on 01-04-2020 10:40 AM
5
0
5
0
WLAN controller newb here. A power outage took out my home network but upon return my two SSIDs came back and my three APs went blue... everything WiFi related was working as expected. Sometime later I logged into the WLAN Controller web-page to see I hav... view more
Flexconnect AP in HA N+1 scenario
Created by vishal.kotian1 on 12-23-2019 02:37 AM
7
0
7
0
Will an AP join the desired Flexconnect group by default in an HA N+1 redundancy as it does in HA-SSO as a cloud entry ? Does it join the same Flexconnect group of which it was a member of prior to switchover or do I need to add it into the desired Flexco... view more
CreatePlease login to create content
Discussion
Blog
Document
Video
Related Content
Discussions
Blogs
Documents
Events
Videos
Content for Community-Ad