This  feature is disabled by default, and prevents clients from quickly  moving from one WLAN to another.  Most Apple iOS devices tend to move  quickly between WLANs and therefore have issues with the default ‘fast  ssid change disabled’ on Cisco WLCs.

The setting causes the  controller to deauthenticate the client from the existing WLAN once the  client attempts to associate to another.

The typical result is an ‘Unable to join the network’ message on the iOS device. 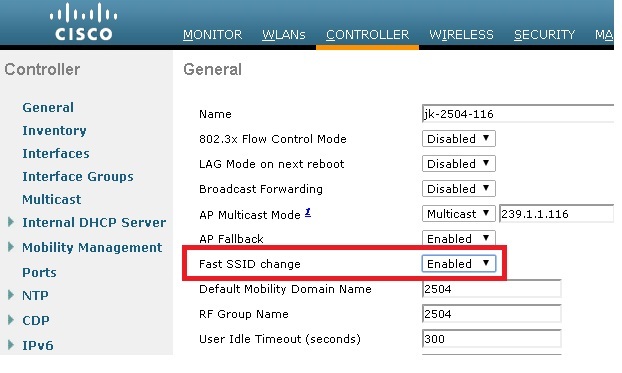 WISPr  is a draft protocol that enables users to roam between different  wireless service providers. Some devices, such as Apple iOS devices, use  a mechanism which can determine if the device is connected to Internet,  based on an HTTP WISPr request made to a designated URL. This mechanism  is used for the device to automatically open a web browser when a  direct connection to the Internet is not possible. This enables the user  to provide his credentials to access the Internet. The actual  authentication is done in the background every time the device connects  to a new SSID.

This HTTP request triggers a Web Authentication  interception in the controller as any other page requests are performed  by a wireless client. This interception leads to a Web Authentication  process, which will be completed normally. If the Web Authentication is  being used with any of the controller's splash page features (URL  provided by a configured RADIUS server), the splash page may never be  displayed.  This is because the WISPr requests are made at very short  intervals, and as soon as one of the queries is able to reach the  designated server, any web redirection or splash page display process  that is performed in the background is aborted.  The device then  processes the page request, thus breaking the splash page process.

You  can now configure the controller to bypass WISPr detection process, so  the Web Authentication interception is only done when a user requests a  web page leading to splash page load in user context, without the WISPr  detection being performed in the background.

On  any iOS device that has an activated cellular/4g interface, Cisco  Jabber (VoIP) App + AnyConnect (SSL VPN) App works as expected. However,  on iOS device that only has a single network interface (iPod Touch,  iPad WIFI Only, iPad with 4g capability but has never been activated  with SIM card), with AnyConnect connected, Jabber in background mode,  and let device rest, after about either 2 min 55 sec or 9 min 55 sec,  the TCP connection between Jabber client and Jabber server is terminated  by the iOS. We think that because traffic between Jabber client and  Jabber server is encapsulated by AnyConnect, iOS is not recognizing the  socket as a VoIP socket.

When  the default gateway for iOS devices is a Checkpoint Firewall cluster  (usually in Anchored use-case), the MAC address of the DG will be a  multicast MAC address.  This is not understood properly by the iOS  devices, and the radio driver in iOS will drop all SYN-ACKs.  This  manifests to client as an inability to get to the Webauth login page.   No known workaround. 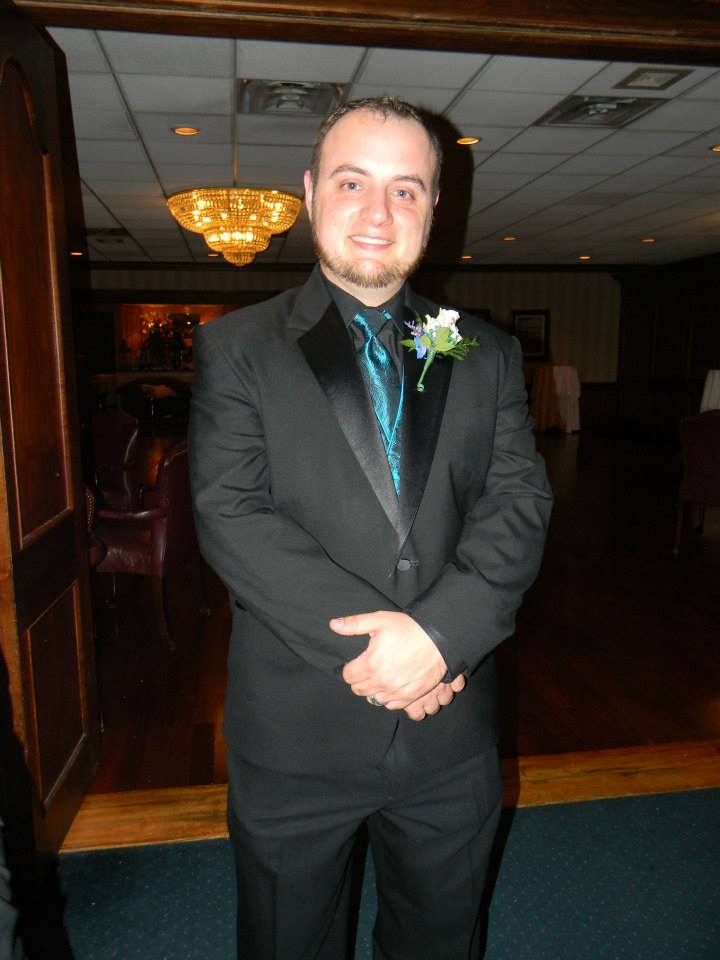 Thank you so much for this. The "Fast SSID change" option was our problem with having several WLANs and SSIDs at the same location. After fighting the issue for quite some time you finally solved our problem. Thanks!

Thank you Jeffrey for sharing common issues and workarounds with CSC user.

I was having issues connecting iOS devices to a guest network on a cisco 4404 WLC controlled network and this method fixed the problem immediately. Thanks for sharing.

Hi Collin, you bet.  Glad to hear this saved some grief ;)

The fast SSID switching was the resolution to my issue; once disabled, I received the certificate trust prompt on the mobile device, and after accepting was then able to connect the device.

Thank you very much. This solved my problem with Apple iPhone and iPad devices not connecting to our controller.

we are using cisco 3850-x switch as a controller and i have 'enable FAST SSID'' on my WLC.. but while Apple users connected on AP they feel slow speed and some times not able to connect. but beside i have windows platform system they are all good!! even FAST SSID working fine but for us Apple users are not good !! 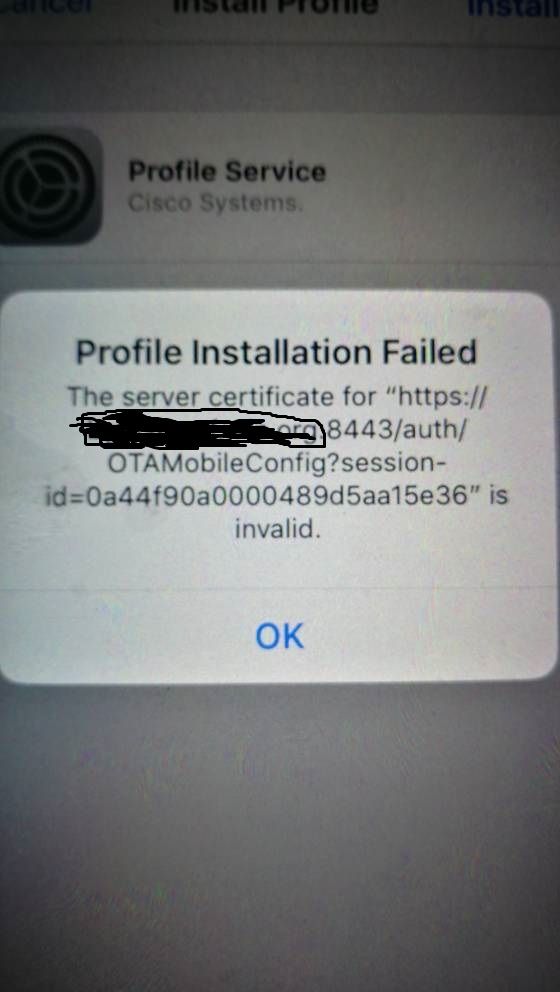 please i have this error from my Ipad and i have tried all TSHOOT i could....i have trusted the certificate and also i have rebooted the ipad and even reset the network setting but still it comes back as this

Good practse are in place on my network but I'm facing the issue with new apple IOS version 11.2.6 disconection.

Latest Contents
Catalyst 9800-40: Upgrade method INSTALL vs BUNDLE?
Created by Bernd Nies on 07-01-2022 12:28 AM
1
0
1
0
Hi,Did anyone have success to upgrade a Catalyst 9800 with IOS XE 17.3.x using the INSTALL method? I was only able to use the BUNDLE method. Also the official Cisco documentation is a bit confusing with the different upgrade methods (BUNDLE, INSTALL, ISSU... view more
CIMC not loading (AIR-MSE-3365-K9)
Created by config tea on 06-30-2022 12:50 PM
1
0
1
0
Hello,During the boot process, I'm pressing F8 to enter the CIMC and I am getting confirmation on screen that the CIMC is loading (first image).However, the CIMC screen does not appear and the software continues to the Intel boot agent (second image).&nbs... view more
Cisco 2800 Radio0 not started, not enough POE power
Created by fabio.teodora on 06-30-2022 12:38 PM
1
0
1
0
Our 2800 APs are not working, they cannot connect to the C9800 (17.3.5a). APs are reporting 'Radio0 not started, not enough POE power'. Already installed power inject from CIsco but problem continues. We already reset the radio
Configuring MSCHATV2 in 9800
Created by zshowip on 06-30-2022 07:54 AM
1
0
1
0
Hi We have user who like to access wifi using MSCHATV2. Do we need to configure something for this MSCHATV2 in wlc 9800? Anyone can share the experience? or provide with some suggestions? Thank you
APs Hardware faulty very frequently
Created by manvik on 06-30-2022 04:34 AM
9
0
9
0
We have AP 1850 series APs deployed in the campus, around 300 APs. All those are connected to Cisco POE switches. Every day at least 2 APs becomes hardware faulty, they don't even power on. All APs are new one, maybe 1 year old.   Any method to ident... view more
Ask a Question
Create
+ Discussion
+ Blog
+ Document
+ Video
+ Project Story
Find more resources
Discussions
Blogs
Events
Videos
Project Gallery
New Community Member Guide
Related support document topics