Wireless Sniffing using a Mac with OS X 10.6 and above

Wireless sniffing on the Mac works well, as Mac OS X has built in tools to capture a wireless trace.  However, depending on what versions of OS X you are running, the commands may vary.  This document covers OS X 10.6 through 10.8.

If you are running OS X 10.6 (Snow Leopard) or above, then you can easily use the command line utility “airportd”.  Use the following steps:

Some things to note:

The airport utility is is not a sniffer program; however, it can provide interesting information about the wireless LAN.  Also, it has the ability to set the default wireless channel - which is crucial for sniffer programs (tcpdump, Wireshark) that are themselves unable to set the channel

Note: because the path to the airport utility is so ugly, it may be a good idea to set a symbolic link to it from a directory in the path, e.g.

dump out info on the SSIDs/BSSIDs seen:

detailed information on the current association:

Tcpdump is a command line utility shipped with OS X that can perform packet capture.  (The tshark utility bundled with Wireshark is very similar.)  To perform a wireless packet capture using tcpdump:

If you are running MAC OsX 10.7 (Lion), you can use the graphical program called Wi-Fi Diagnostics.   It’s located in the following folder:

Normally this folder is not easily accessible so a quick trick is to open the “Finder” and use the "Go to folder" (“Shift-Command-G”) option; this will open up a dialog box in which you can enter “/System/Library/CoreServices” and press return. There you will find the Wi-Fi Diagnostics program.

Here is a example of using the tool to monitor Wi-Fi Performance: 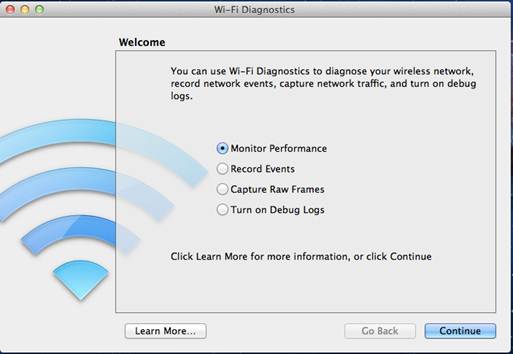 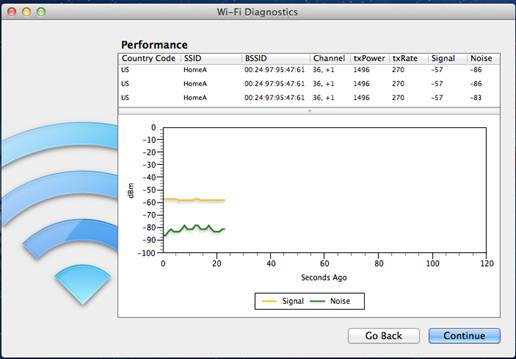 Here is any example of using the tool to record Wi-Fi Events: 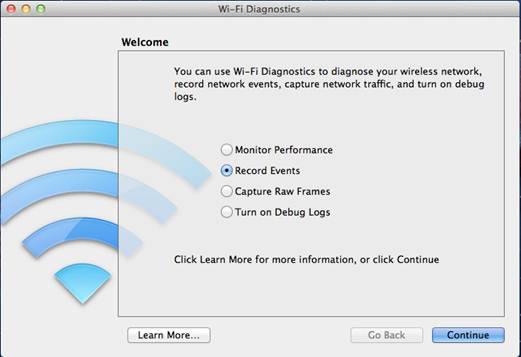 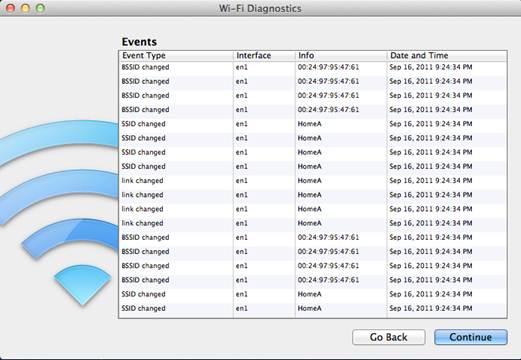 Here is any example of how to enable the Debug logs to be taken, this will allow you to see all messages that occur at the driver and supplicant level on the MAC 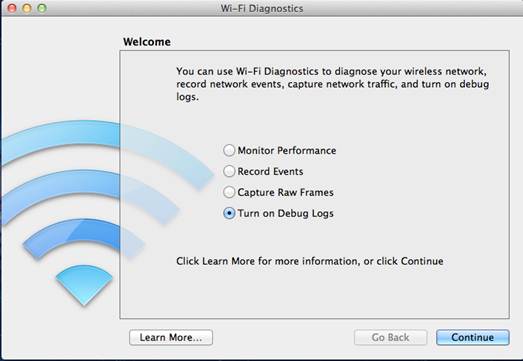 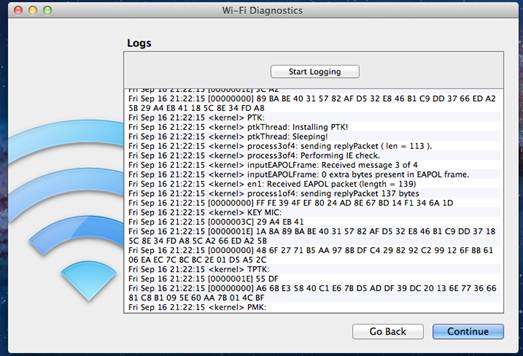 Here is an example of using the tool to capture raw Wireless frames that can be heard by the MAC. 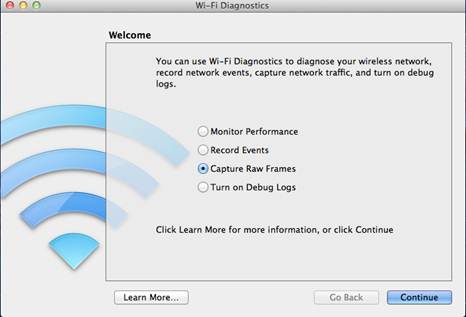 Check the box to disconnect from the network and select the channel that is being used by the client that are you sniffing. as you want to capture all data send and received on the network since we are using the sniffer to capture another wireless client’s frames 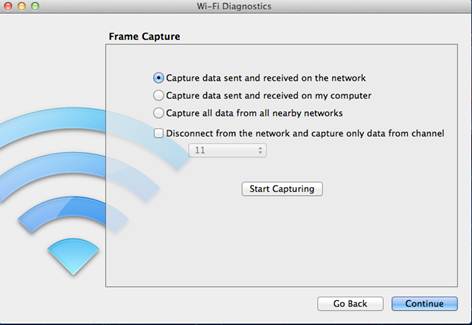 The trace will start after pushing the “Start Capturing” Button. Once you have finished the trace, push the “Stop Capturing” button and click on “Continue”, a dialog will ask to either save the report to the Finder desktop or send it via an email. 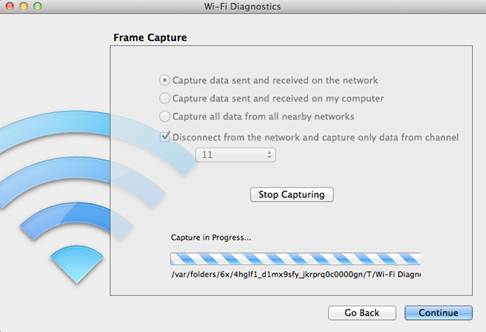 Another option on the MAC to capture a wireless trace is to use Wireshark. This is a free program that can be downloaded from http://wireshark.org. (Note: this requires that X11 be installed - for OS X 10.8, this means downloading and installing Xquartz.)

Once installed and started, select the capture option and fill out the dialog as follows: 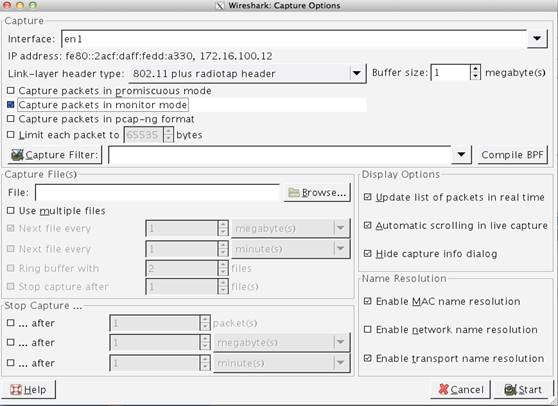 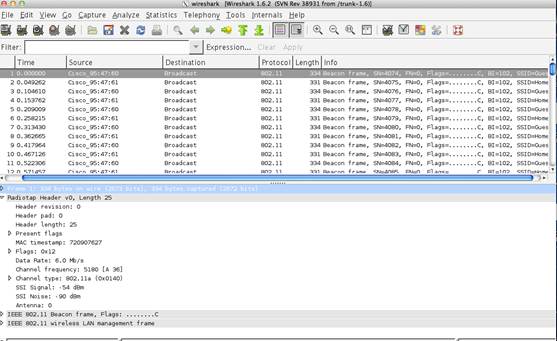 I would love to know what all the columns returned by airport -s stand for.

I note that my devices (iphone etc) do not seemless roam between my apple airport and cisco 877w. Both devices have identical SSID's but what else needs to be the same to allow roaming?

As far as seamless roaming between APs ... well it's not guaranteed (unless they're all Cisco , but if you:

you've got the best chance of getting it to work.

You can lock WireShark to a particular channel within OS X.  Here's how:

Go to the Packet Capture Window and select the desired channel, but do not click "Continue"

Press the option key while clicking on the Wi-FI Indicactor on the right side of the top bar.

You wll see extended information of the wireless networks and then a menu selection for Wi-FI diagnostics towards the bottom.

What is the difference between using the "airport" utility, ie:

Seems like both of them put the interface into "monitor mode", and both capture 802.11 frames (including management & control) but the latter disconnects you from any connected nets, and the former does not.

Put another way, does using the airport util. actually capture all frames in monitor mode? Seems like it does ( I still see control/mgmnt frames), but I remain 'connected' to network.

Answering my own question here, after discussing this elsewhere:

Kind of obvious now, but point being: If a radio is transmitting, there's no way for it to be receiving at the same time. Hence, even if OSX is just probing to remain associated, the chance is there to miss frames. "airportd" method should be used when absolute accuracy is required.

"airport" method can still be useful for a quick capture, especially if you want to see the frames real-time. Example: wanting to quickly verify data-rates being supported/mandatory, you can see that fly by in the tcpdump stream (just leave off the -w flag).

Can you please tell me how do you sniff in 80 MHz mode?? I use the airport utility to set the channel. the 1,-1 after the channel number tells about the secondary 40MHz channel. However, when I set channel number, I am not able to capture 80MHz data packets. The alternative method is - I associate to an AP which is operating in 80MHz, and then start wireshark. Now it captures all 80MHz packets as well. How do I configure it to sniff 80MHz packets without associating to an AP? 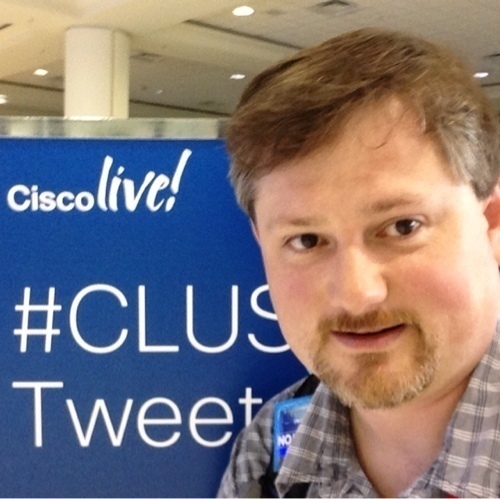 It's free and the author also makes several other useful Wi-Fi related applications for both OSX and iOS.

Looks like Wi-Fi Diagnostics is deprecated so may want to add info about Wireless Diagnostics.

This is included in Mac OS 10.11.6 (El Capitan), not sure if included in earlier versions.

Launch Wireless Diagnostics (located @ /System/Library/CoreServices/Applications) by using the command + click on the Wi-Fi icon on the title bar, use the Spotlight search option, or simply browse the hard drive.

Hello! Thanks for posting this.

I'm trying to capture some packets from a device on my network and I'm having some trouble.

Here's the output from my terminal:

I am able to run the capture and perform some actions on the device. The private IP of the device is 192.168.1.9. The actions work correctly, so we know some packets were sent/received.

Then I open that file in WireShark, and I can't seem to find any packets sent/received on that IP.

Filters I have tried:


Unfortunately, using any of the filters above, I'm not getting any packets found.

Can anyone tell me what I'm doing wrong?

Is the Wi-Fi network you are sniffing encrypted?  If so, you will not see the ip level details without importing the keys.  This is possible in Wireshark, but not with the airportd command

Hello, thanks for your reply!

The WiFi network is encrypted, yes. I have admin access to the router, so can you tell me how I should go about getting the private key?

Sorry for the beginner-level questions...

So I have now configured WireShark with my WPA password.

My WireShark is already in promiscuous mode, so is there something else I'm missing?

Latest Contents
WLC 8540 and 9800 max. CPU and Memory recommendations
Created by ciscoprolin on 06-17-2021 07:43 AM
1
0
1
0
Dear All,could you tell us which CPU and Memory ranges (values in %) are fine for the 8540 and C9800 WLCs and from what percentage we need to trigger warning and alerts / take actions.Thanks very much
TACACS with HTTP Authentication - Cisco 9800
Created by NWJ on 06-17-2021 06:38 AM
3
0
3
0
Hi All, I've recently added TACACS to web UI authentication but it seems I can only have two privledge levels: Level 1 - Can only view monitoring tab, no config settings or troubleshooting. Level 15 - can view all and make changes. &nb... view more
C9800: AP disabling and enabling takes long until 5 GHz is r...
Created by Johannes Luther on 06-17-2021 03:04 AM
2
0
2
0
Hi board,If I disable and enable an AP using:ap name myAP shutdown ap name myAP no shutdownIt takes ages until the 5 GHz radio is ready (example 2802)What I see in the 5 GHz radio summary is after the AP is enabled, that there is a small "#" sign after th... view more
AP Unexpected reboot
Created by tanner.zaitt on 06-17-2021 02:56 AM
6
0
6
0
Hello AllPlease could you confirm that the reason for restarting of the access point is related with Poe issue?Last reset from power-onI didn't find logs for Poe issue...Logs from the switch:016229: Jun 17 10:32:42: %LINEPROTO-5-UPDOWN: Line protocol on I... view more
Wireless Device go off and on whenever there is a new device...
Created by chris00011111111111111 on 06-17-2021 12:24 AM
3
0
3
0
Dear all,I have 2 AIR-AP1852I-E-K9 but whenever a new device connects or even a device that has taken some time to connect to AP, the wireless device goes off and reboots. This happens almost daily the devices reboots several times a day, I need some... view more
Create ContentLogin to create content
Question or Discussion
Blog
Document
Project Story
Video
Related Content
Discussions
Blogs
Events
Videos
Project Gallery
Content for Community-Ad