Cisco Community
English
Register
Login
Tell us how your company is accelerating digital agility. LEARN MORE and share your story.
RegisterLogin
Options
Turn on suggestions
Auto-suggest helps you quickly narrow down your search results by suggesting possible matches as you type.
Showing results for
Search instead for
Did you mean:
807
Views
0
Helpful
3
Replies

stp set up of wireless bridge

Recently, I was implementing a project in the dock.The environment roughly like this: 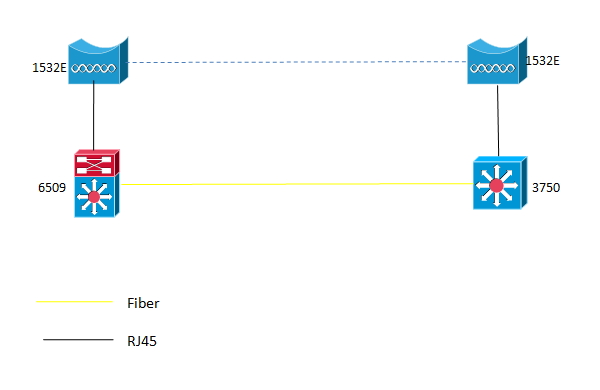 Now,I was wondering if  the 2 APs should be seen as transparent or be seen as 2 switches when the wireless link has been established.

Below are 2 doubts I have now:

1.when I regard the 2 APs as transparent , why the port  that 3750X connected to the AP(right) has been selected as a  designated port but not a non designated one

Note：I have configured the command "bridge * protocal ieee" for every bridge group which associated to every vlan on both the 2 APs.

Labels:
Preview file
43 KB
I have this problem too
0 Helpful
Reply
3 REPLIES 3

If you have allowed a vlan (X) across both fibre link & the radio bridge, please post the output of

One of the port shoud be block in 3750 switch for that vlan & other port should be Root port. Refer this post for the STP root selection rules.

We use the bridge number protocol ieee  global configuration command to enable Spanning Tree Protocol (STP) on the bridge. STP is enabled for all interfaces assigned to the bridge group that you specify in the command.

Simple Concept is that on "bridge * protocal ieee" its running STP globally and * protocal vlan-bridge" is running globally but on vlan basis (logical networks), in wireless bridges.

Mean blocking for VLAN-X is forwarding for VLAN -Y in "protocal vlan-bridge".

Latest Contents
Announcing Cisco Wireless 8.10MR6 Third EFT/Beta - 8.10.158....
Created by Sudhagar Singh on 06-14-2021 04:09 AM
0
10
0
10
Greetings! Thank you for the overwhelming response to the First and Second EFT refresh of 8.10MR6! We are excited to announce the third refresh of 8.10 MR6 EFT Program for PRODUCTION deployments. While the CCO release of 8.10MR6 is just a few we... view more
Announcing Cisco Wireless Catalyst 9800 - 17.3.4 Second EFT ...
Created by Sudhagar Singh on 06-03-2021 06:40 AM
0
5
0
5
Greetings!Thank you for the overwhelming response and feedback for the first 17.3.4 EFT/Beta release. Now we are excited to announce the second refresh of 17.3.4 EFT/Beta Program for PRODUCTION deployments.   This release is the s... view more
Cisco IOS-XE 17.5.1 for the Catalyst 9800 Wireless Controlle...
Created by anandg on 04-02-2021 11:02 AM
5
15
5
15
It’s been about two and half years, since the launch of next generation Cisco Catalyst 9800 Wireless LAN Controllers that has the most deployment flexibility and runs the modular, scalable, highly reliable, open and programmable operating system, I... view more
Wi-Fi 6 and Embeded Wireless Controller (EWC) Demo
Created by eugenelee28 on 03-21-2021 01:48 AM
3
5
3
5
Hi All, I have made this video for Cisco Pitch the Future Contest in Malaysia which talks about Wi-Fi 6 and EWC Demo. Please feel free to view the video below and please support me for this contest by giving the video a like as the Contest will end o... view more
Cisco Wants your Feedback on the Cat9800-80!
Created by caiharve on 03-09-2021 03:43 PM
0
5
0
5
Review the Cisco Catalyst 9800-80 Wireless Controller on TrustRadius and receive a $25 gift card!
Create ContentLogin to create content
Question or Discussion
Blog
Document
Project Story
Video
Related Content
Discussions
Blogs
Documents
Events
Videos
Project Gallery
Content for Community-Ad