Welcome to the new Cisco Community. LEARN MORE about the updates and what is coming.
Turn on suggestions
Auto-suggest helps you quickly narrow down your search results by suggesting possible matches as you type.
Showing results for
Search instead for
Did you mean:
Create a new article
Options
1149
Views
10
Helpful
0
Comments

Cisco Nexus 1000V cloud switch is a virtual appliance. It provides integration of physical and virtualized network infrastructure. Cisco Nexus 1000V switch is compatible with VMware ESX and vSphere (ESXi) hypervisors. There is a version for Microsoft Hyper-V and Open KVM as well for additional public cloud and platform support. 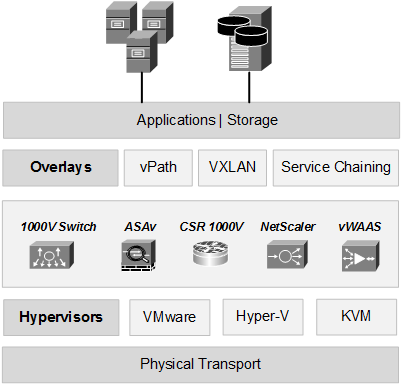 The Nexus 1000V virtual switch forwards packets to the CSR 1000V for all external destination subnets including VLANs. That would include cloud instances and the enterprise network. The Cisco Nexus 1000V switch primary components including a Virtual Ethernet Module (VEM) and Virtual Supervisor Module (VSM). The VEM is part of the hypervisor and the VSM is a virtual appliance.

The Cisco Nexus 1000V cloud switch manages multiple Virtual Ethernet Modules (VEM). The VEM is embedded with the VMware ESX or ESXi hypervisor. The VEM is similar to a traditional switch line card. The VEM is configured from the VSM and provides switching between servers. In addition it forwards packets between virtualized servers and virtual service nodes (appliances). 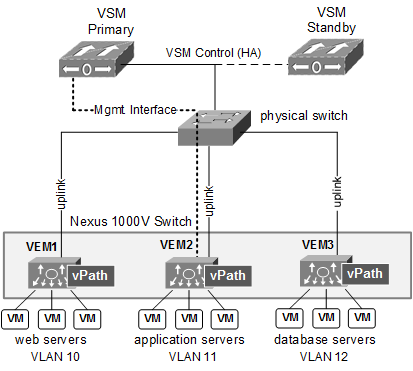 The VEM includes Cisco vPath for intelligent traffic steering. Each VM is assigned a dedicated virtual switch port on the VEM. The architecture bundles multiple VEMs as a virtual distributed switch. There is support for a maximum of 64 VEM per vSwitch and most standard switching features. The VMware VEM supports Non-Stop Forwarding (NSF) of packets as well. That occurs when the primary VSM fails. The NSF feature provides continuous data plane forwarding during the switchover to the standby VSM. 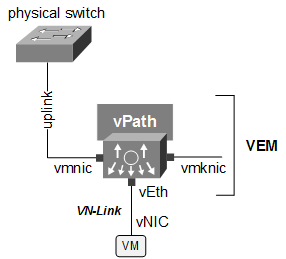 The Ethernet interface on the virtual switch is similar to the standard Ethernet port designator on a physical switch. It is assigned to an uplink port (uplink0).  The uplink port is mapped to a physical NIC (vmnic) defined on the hypervisor. The vmnic is the actual physical NIC on the server.

The uplink port profile is configured as an Ethernet interface that forwards tenant traffic to the physical switch. The Ethernet interface can be assigned to an access port or trunk port as well. The port channel is an aggregate or bundling of multiple Ethernet interfaces on the same VEM. That creates a single logical connection between virtual switches.

The ESXi is managed 100% with VMware vCenter and vMotion. That is accomplished with a vmknic interface. There is a vmkernel interface used for Layer 3 control traffic from the VSM to VEM.  The ESX hypervisor uses a vmknic as well for vMotion to move VMs between virtual switches. The management interface is assigned to a VLAN with a port profile.

The VEM could be part of the same switch or assigned to a separate 1000V switch. Inter-VEM connectivity is across a physical switch. Traffic destined to a different VEM is forwarded on a virtual switch uplink.  The 1000V switch uplink is configured as a trunk port with allowed VLANs. The IP address for the remote VEM is obtained from a DNS request.

The MAC address for a VM connected to a remote VEM is learned from the server pNIC table of MAC addresses. The VEM floods all ports of the same VLAN for a MAC address that isn’t known. That is commonly referred to as MAC address learning. The server VM will send an ARP request to the hypervisor for the MAC address of any VM assigned to a different VLAN.

The Virtual Supervisor Module (VSM) is the control plane that can manage up to 64 Virtual Ethernet Modules (VEM) as a single logical switch. VSM is an SDN controller for the Cisco virtualized compute platform. The VEMs can be distributed across multiple servers. The VSM is a virtual appliance similar to a Supervisor Engine, and based on the Nexus NX-OS platform. The VSM manages VEM configuration as well including switch port profiles. Cisco 1000V virtual switch supports VSM redundancy. There is a primary and standby VSM configured for active/standby mode. The primary and standby VSM maintain synchronized state tables for fast stateful failover to standby VSM.

There are two VSMs managing one or more VEMs that comprise a single Cisco Nexus 1000V Series Switch instance. The VSM has a control interface for monitoring active and failover VSMs. In addition there is a management interface that connects to the VEM vmkernel interface for configuring VEM modules. The packet interface is used for CDP and multicast traffic between the VSM and VEM.

There are Layer 2 and Layer 3 control modes available for connecting VSM to VEM modules. Layer 2 mode is available if the VSM control interface and all managed VEM modules are in the same Layer 2 VLAN. Layer 3 mode is required when the VSM control, management and packet interfaces are on a different subnet than the VEM. The Layer 3 mode encapsulates control and packet frames with a UDP tunnel for VSM to VEM connectivity.

The Nexus 1000V switch doesn’t require spanning tree protocol. The switch doesn’t send BPDU packets and drops any BPDU that arrive at interfaces. Loop prevention is provided with inspection of source and destination MAC address on ingress Ethernet interfaces. The packet is dropped if the source MAC address is internal to the local VEM. The packet is dropped as well if the destination MAC address is external to the local VEM.

Port profiles are defined with some of the same switch settings as with a physical switch port. That includes interface type, port type (access or trunk), VLAN, MTU, QoS, port security and channel group. The port profile is assignable to single or multiple server vNIC interfaces.

The Cisco VN-Link technology is a set of features integrated with the Cisco Nexus 1000V switch. It enables policy-based VM connectivity, policy mobility and a non-disruptive operational model. The VN link is a logical connection between server vNIC and virtual switch vEth interface on the VEM.

The virtual machine (VM) mobility feature is managed by VMware vMotion for virtualized platforms using the VMware hypervisor. The purpose of VMware vMotion is to manage the migration or moving of VMs between servers or data centers. The port profile defines network and security policies that move with the virtual machine. That allows cloud providers to deploy VM mobility.

The VM can be moved dynamically based on performance, scalability and availability requirements. It allows for easier security auditing from server to server as well. In addition to policy migration, the virtual switch VSM provides network stateful awareness that moves with the virtual machine. That increases network availability and avoids session resets. The Cisco Nexus 1000V switch allows network interface cards (vNIC) to be bundled as a single logical channel with QoS assigned to each traffic type. For instance vMotion traffic could be prioritized with QoS for improved performance. 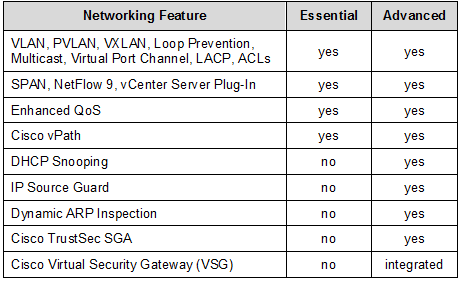