An IKE session begins with the initiator sending a proposal or proposals to the responder. The proposals define what encryption and authentication protocols are acceptable, how long keys should remain active, and whether perfect forward secrecy should be enforced, for example. Multiple proposals can be sent in one offering. The first exchange between nodes establishes the basic security policy; the initiator proposes the encryption and authentication algorithms it is willing to use. The responder chooses the appropriate proposal (we'll assume a proposal is chosen) and sends it to the initiator. The next exchange passes Diffie-Hellman public keys and other data. All further negotiation is encrypted within the IKE SA. The third exchange authenticates the ISAKMP session. Once the IKE SA is established, IPSec negotiation (Quick Mode) begins.

IPSec negotiation, or Quick Mode, is similar to an Aggressive Mode IKE negotiation, except negotiation must be protected within an IKE SA. Quick Mode negotiates the SA for the data encryption and manages the key exchange for that IPSec SA.

Please note that the use of PFS is suggested in the first quick mode message via the optional KE payload, not within IKE Phase 1.

how can configure cisco 877 on main mode?

You can create an Isakmp profile and set the mode to agressive. Then apply it to the crypto map.

Please Briefly Explain why we have to make septate tunnel for SA & IPSec for VPN Connectivity ?

Why we build two tunnel (SA and IPSec) for VPN Data Transfer ? can it possible through only one tunnel ?

First tunnel (ISAKMP - phase 1) both sides initiates and agree on terms they'll use (as described in figure). At this point, if any config that must be the same on both sides are different, then your VPN won't be established.

Second tunnel (IPSec - phase 2) is created for encryption. You can use it or not, but it's highly recommended to use it.

You can verify your SAs with these commands:

How do I connect a Cisco / iPhone VPN client to a firewall running main mode ?

As soon as I disable aggressive mode VPN clients are not able to connect.

Right....perfect forward secrecy comes in Phase 2, not in Phase 1.

I have a question here. For DH Key exchange, first we need to agree upon prime number "p" (prime modulus) and other number "g" (generator).

Can you mention in which message we are going to negotiate/agree on these numbers..?

I have checked pcap files and i don't see these values anywhere.

I beg to disagree with the highlighted text below:

For detail look at its capture file for aggressive mode:

The link that you provided is not working.

Will like to understand more whether this vulnerability flag on aggressive mode is valid or not.

Looks like Sarah's link shows only the Responder ID, as mentioned (Aggressive Mode). Here's a pic, in case the link doesn't work for you.

You can use it with certs for identity protection, though.

This link also has some quick and useful info: 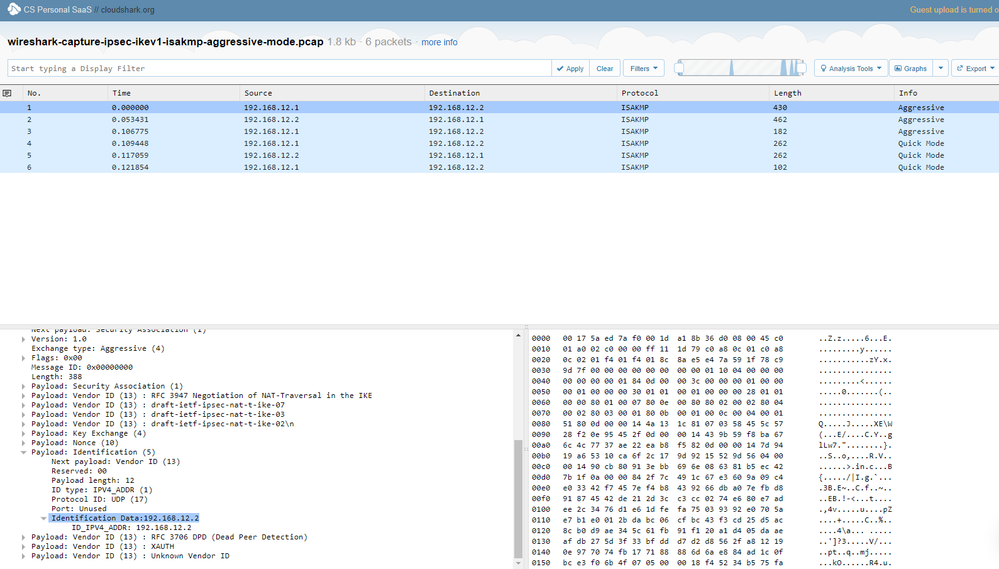 Thanks a lot for detailed information regarding this one really help me a lot.