Cisco Community
English
Register
Login
Great changes are coming to Cisco Community in July. LEARN MORE
RegisterLogin
Options
Turn on suggestions
Auto-suggest helps you quickly narrow down your search results by suggesting possible matches as you type.
Showing results for
Search instead for
Did you mean:
4619
Views
10
Helpful
2
Replies

Using the Packet Capture Tool on the CLI Analyzer

The introduction of version 3.2.1 of the CLI Analyzer comes with several additions granting customers more diagnostic capabilities to manage their Cisco devices more effectively. This post is to discuss the Packet capture tool, a new addition to the CLI analyzer, the value that it will bring to you, and the challenges that it addresses. We will go through sample workflows in which we hope will encourage you to utilize this tool while using the CLI analyzer.

The Packet Capture tool was designed to streamline the process involved in configuring packet capture sacross different platforms. From defining initial parameters of a capture to providing an overallsummary of packets collected, we take the nuances out of the setup process by asking the user a fewsimple questions to configure their devices with the respective feature. If you find yourself asking questions like “what packet capture features are available for my router?” or “how do I capture packetsflowing through my device to this specific subnet?” then this tool can help you get started! The PacketCapture tool currently supports IOS based routers and switches, IOS-XE based routers and switches, NX-OS based switches, and the ASA. 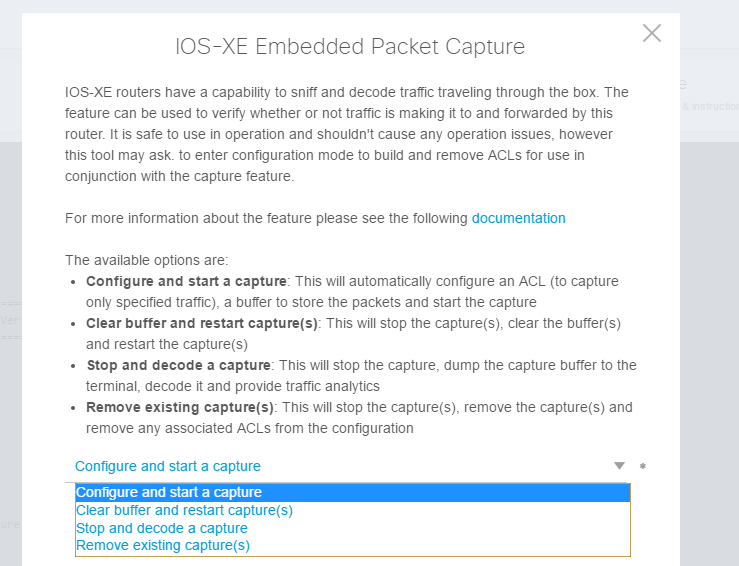 Once the tool is ran and user inputs are gathered of what type of traffic they want to collect, a result will be populated in the Tool Results tab of the exact changes that were made. Here is an example for an IOS-XE capture being ran:

Notice that a unique access-list is pre-populated for this capture and we capture traffic for a flow in both directions. This is because it is often useful to look at not how long how a device behaves in a single direction but also how it might react to response traffic. 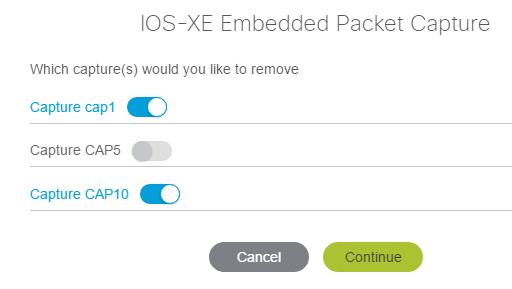 The tool result will populate the CLI result we used to achieve this operation so you can always review what was done configuration wise: 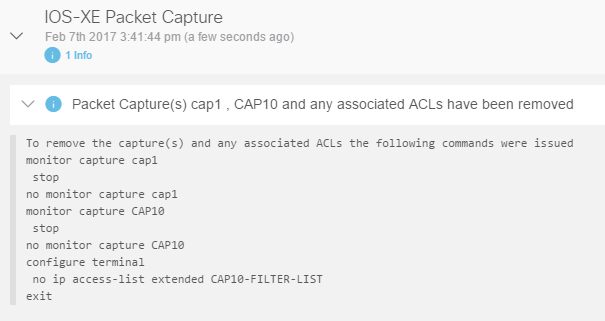 Providing the user with a simplified interface was not the only design focus of this tool. The post analytics and ease of exporting the captured results of a quick and easy PCAP file are some of the key features provided by this tool.

After decoding a capture, the tool will provide you a summary of the captured packets and breakdown a list of the top talkers by each layer allowing for quicker analysis of the flows captured: 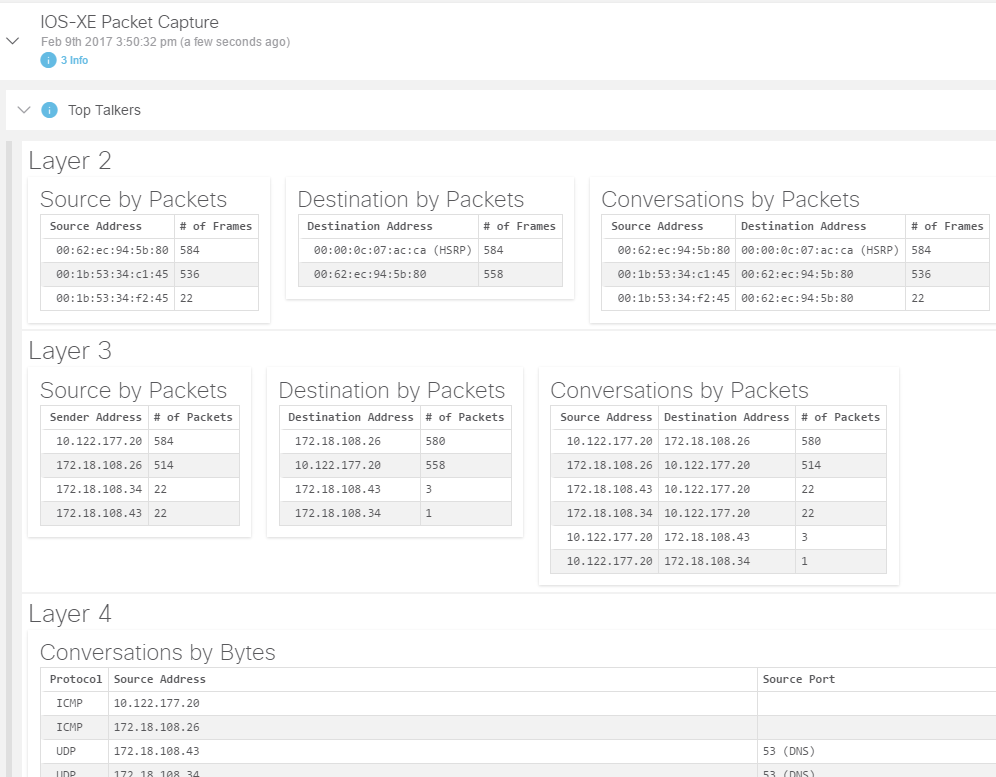 Are you looking for a deeper understanding of traffic captured? Download the PCAP straight to your PC and open it up with your favorite network protocol analyzer:

Use Case Example with NetDR

In this example, we will step through the workflow options with the Packet Capture tool for a 7600 using NetDR feature. After clicking the Packet Capture Tool, the tool will guide you to the NetDr capture form prompting for a list of options based on what the user decides to do. A brief description of NetDR and link to feature documentation is provided for additional information on some of the configurable fields: 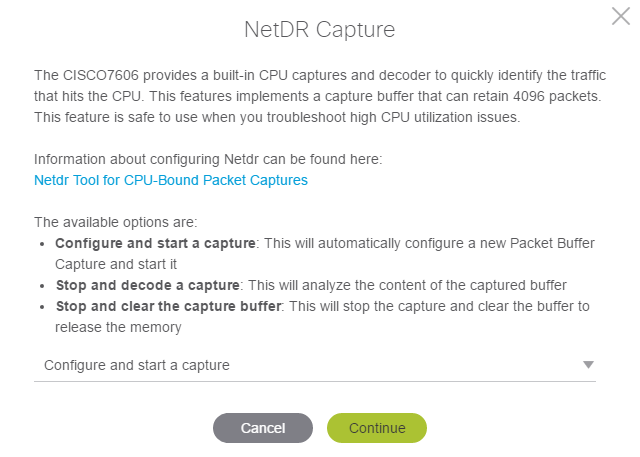 When we select the 1st option – “Configure and start a capture”, the next form prompts for basic questions about the traffic the user wishes to capture. 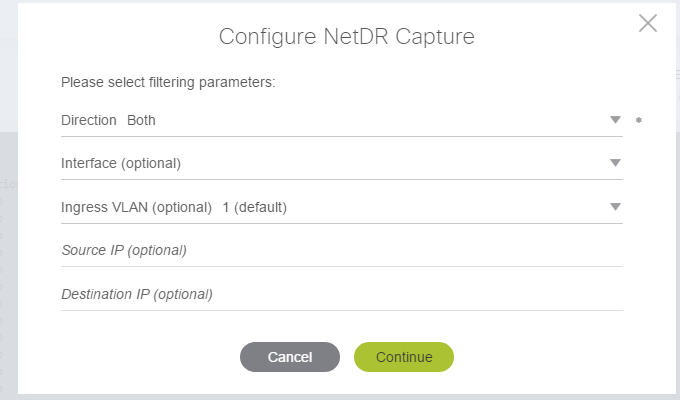 The fields with the dropdowns will be populated based on the available information that was pulled from the 7600 through ‘show’ commands collected in the background: 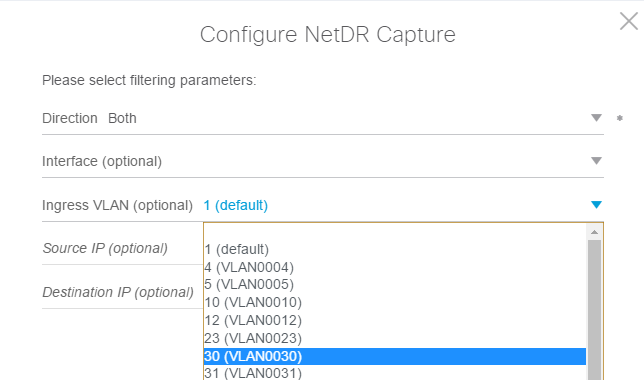 After populating the appropriate fields with input and clicking continue, we are provided with the tool results of the command was executed to start the NetDR capture:

When ready to decode the contents of the packets we captured, we run the Packet Capture tool again and select the 2nd workflow option – “Stop and decode a capture”. Here we do a breakdown of all the packets captured by NetDR destined to the CPU on VLAN and provide a breakdown of the L2 information: 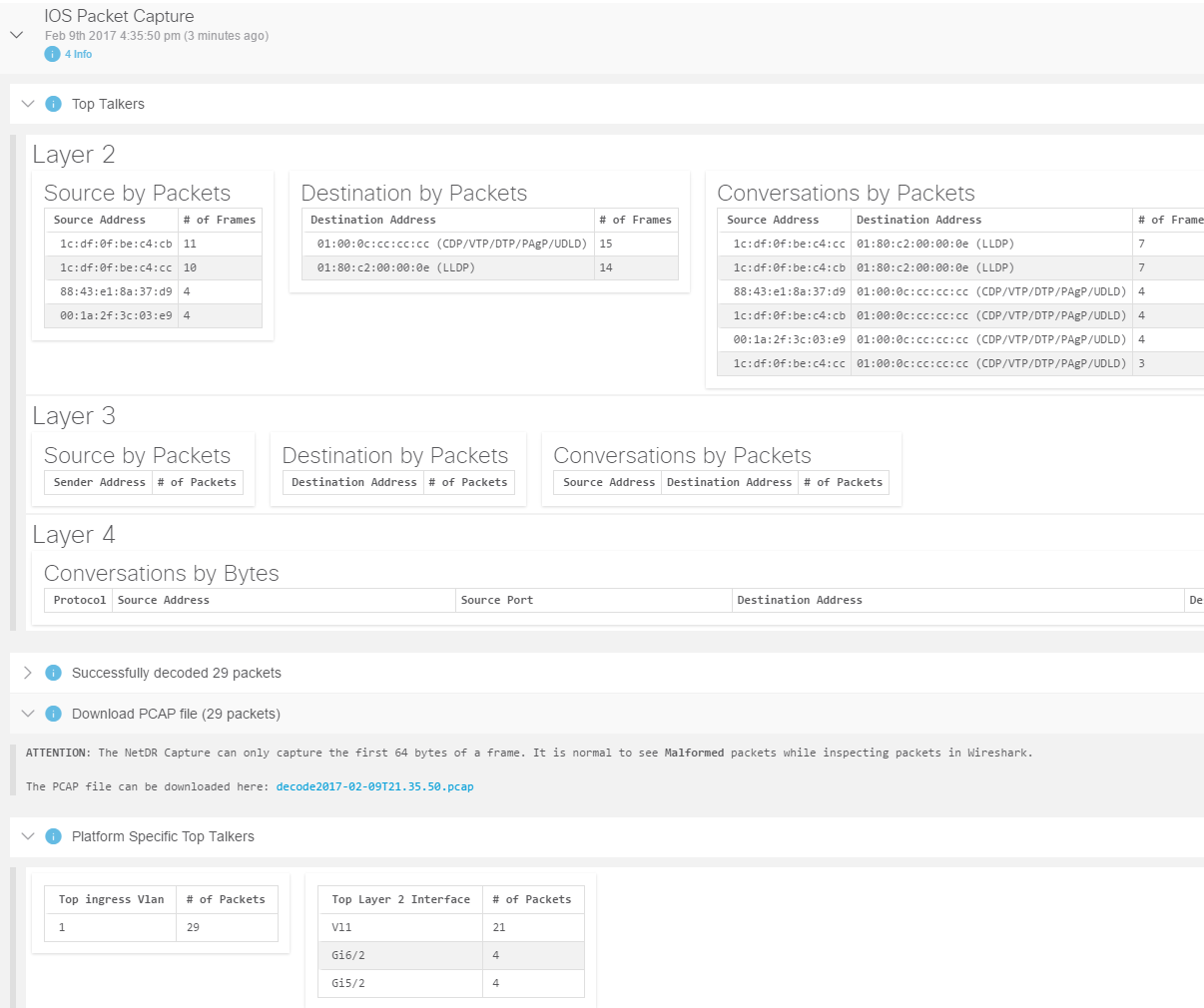 The 3rd and final workflow option is the “Stop and clear the capture buffer” – when you want to remove any existing NetDR captures, selecting this workflow option will execute these commands and the resulting tool list will show the following: 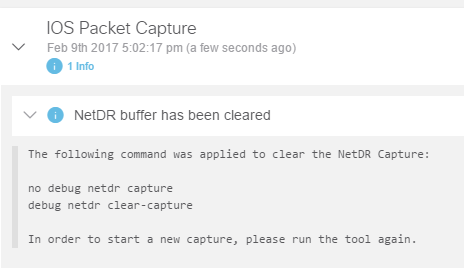 Use Case Example with Embedded Wireshark

This example will show the example workflows using the Packet Capture tool with a 4500/Sup7E. As before, as soon as the CLI analyzer has identified once the device details, click on the Packet Capture icon from the tool list to get started. You will notice that the presented form will ask you what kind of capture to configure. This is because the 4500 has two distinct captures available on this platform – this being CPU queue debugging and Embedded Wireshark.

Selecting CPU Capture will invoke a workflow for CPU Queue Debugging feature similar to NetDR presented in the earlier scenario. In this example, we will focus on the Interface Capture workflow that will invoke the Embedded Wireshark form. 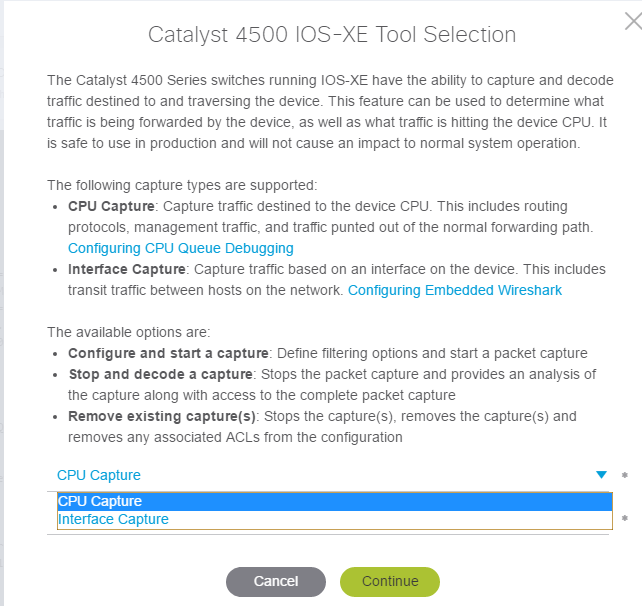 There are three workflow options available for the 4500 selector tool. By selecting “interface capture” and “configure and start a capture”, a form will be prompting the user for required inputs used by Embedded Wireshark: 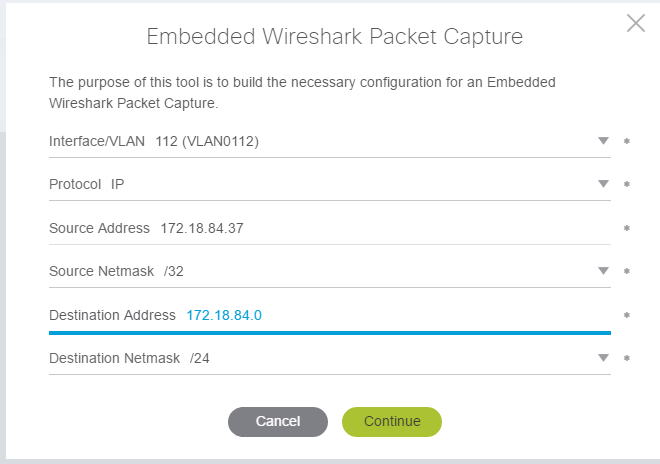 As before, the tool will prompt the user before making any configuration changes and also provide an output for what changes will be made. Notice that the CAP1-FILTER-LIST access list will populate an entry for both directions: 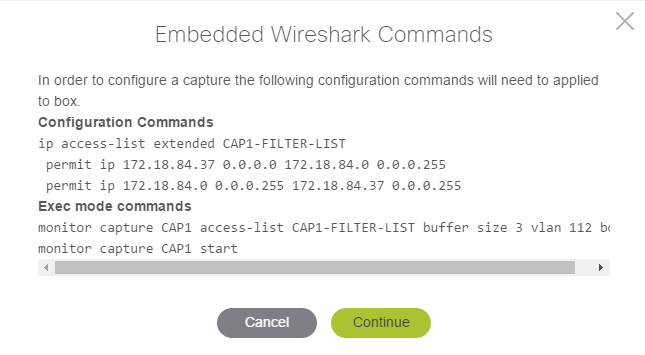 The tool results will show the list of configuration commands and should maintain a history so you can always come back and review what changes were made: 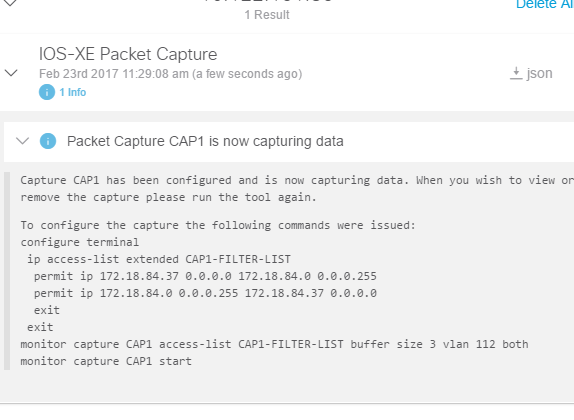 In this next picture, we show a sample flow to a device within the same subnet. By re-running the tool again, you can decode the capture by selecting the “interface capture” and “stop and decode a capture” workflow option. From the result list, the tool will populate a similar result as the NetDR example with top talker entries, an overall snapshot of the conversation of packets, and an option to download the PCAP file: 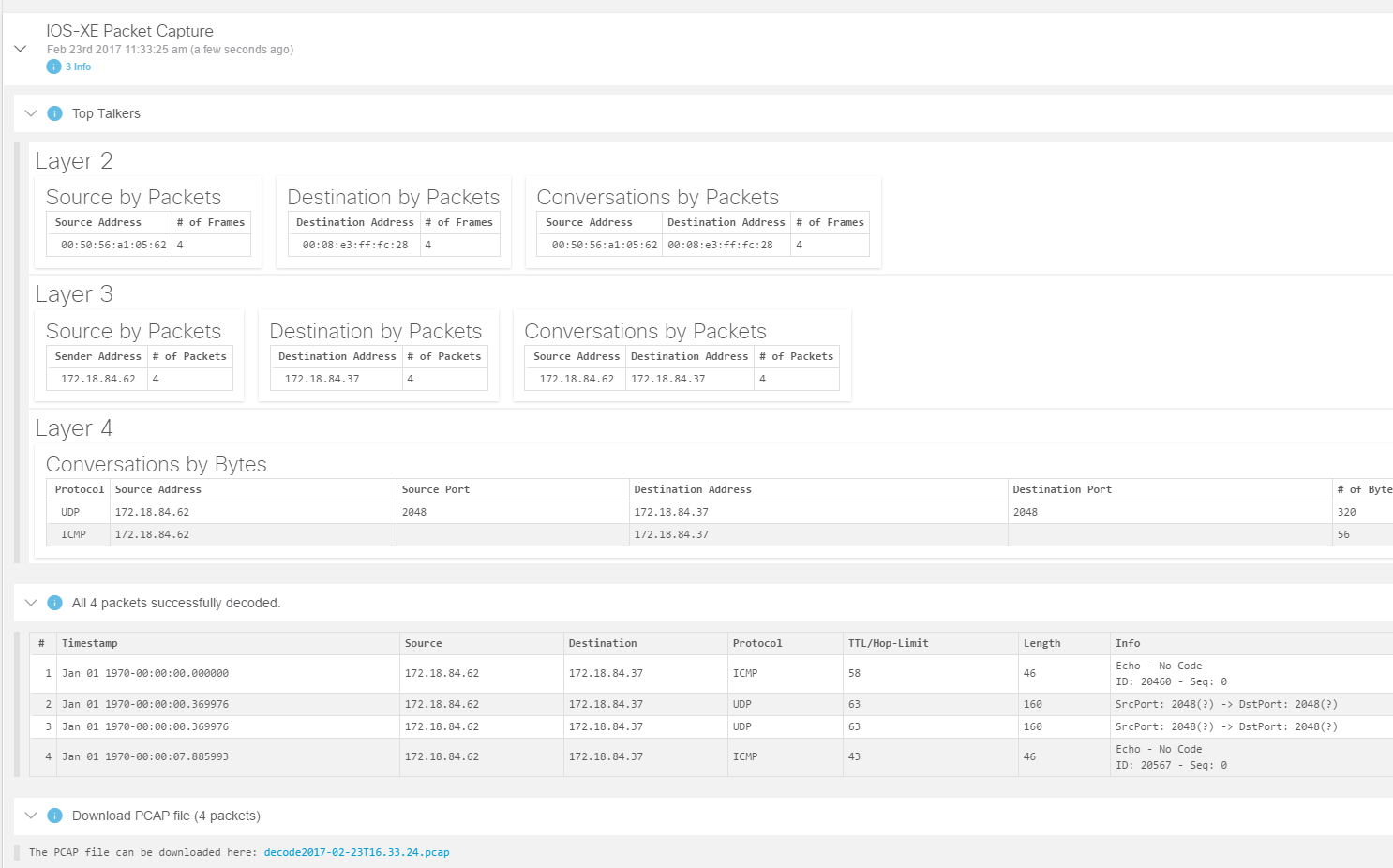 The final workflow option is to remove any configuration that was configured previously by selecting “interface capture” and “remove an existing capture”. If you have multiple captures configured, you may notice that the option exists to remove multiple captures with this tool by selecting the captures individually to for removal (not pictured). As always, the tool will prompt you on the list of commands it wants to run before making any changes so you can always review what will be done: 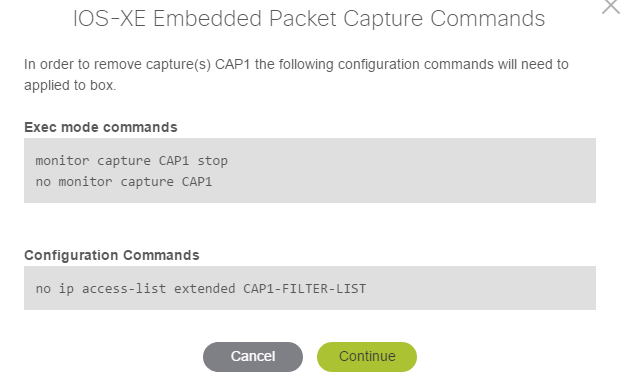 The design of the Packet Capture Tool is intended to simplify the complexities involved in running packet captures. We hope that the versatility in platform support and the simple workflow options guide you to quicker diagnosis of problems during the troubleshooting of a network problem. We are continuously improving this tool and hope to expand on more platforms and features in the future. Please feel free to post a reply if there are any questions or if there are any further clarifications needed.

A live demonstration was made of this here:https://cway.cisco.com/tools/CaptureGenAndAnalyse/

I tried this recently on a 3650 switch running 16.6.8. Two concerns: the commands issued always capture traffic in one direction only; the captured packets aren't accurate. Wireshark flags "Bad length value nnn > IP payload length." The truth is, there is nothing wrong with the packets.

If I set up the monitor capture manually, the capture file is accurate.

Cisco Employee
In response to alclark10

We exchanged a few emails.

1) The problem with the unidirectional capture was because capturing is done on a L2 VLAN. At the time of development, embedded wireshark only allowed for capturing on the ingress direction for a capture on nova releases (pre-16.x):

As of 16.1 in above, embedded wireshark was extended to allow for capturing in both directions:

VLANs—Starting with Cisco IOS Release 16.1, when a VLAN is used as a Wireshark attachment point, packet capture is supported on L2 and L3 in both input and output directions.

At this time, the packet capture module within the CLI analyzer still assumes ingress capturing is only allowed for vlans so setting a bi-directional capture on a vlan will need to be done manually.

2) We noted a decoding problem for the captures via the tool and have corrected this.