Server Virtualization (aka hardware virtualization) is the most common application being used for Hardware’s virtualization where hypervisor software enables creating a virtual machine (VM) that emulates a physical computer by creating different OS environment that is logically separated from the hosting system. A single physical system/hardware can be used to create several VMs that can run different OSs independently and at the same time.

Although Cisco UCS is a scalable, manageable and simplifying operations rather than make it harder such as adding or moving servers, installing new VMs ..etc within minutes only, but the actual Design of Cisco UCS system requires some knowledge/expertise in different areas such as systems virtualization using VMware, Storage (SAN) and L2 and L3 Networking. This article will focus on the networking part from high level point of view describing methods and mechanisms to setup and design of the virtualized network connectivity with the physical network world and compare different approaches and methodologies using Cisco UCS and Nexus 1000v Switch. In this article there will be no deep dive in any of the discussed areas, but a link of each discussed concept will be provided that can be referred to for more details and technical understanding which will help to direct the designer to the right direction first before going deep into the details.

Designing and building a virtual switching LAN within the virtualized environment such as VMware has some similarities to the physical switching but there are some technical differences in the operations and the used terminologies: 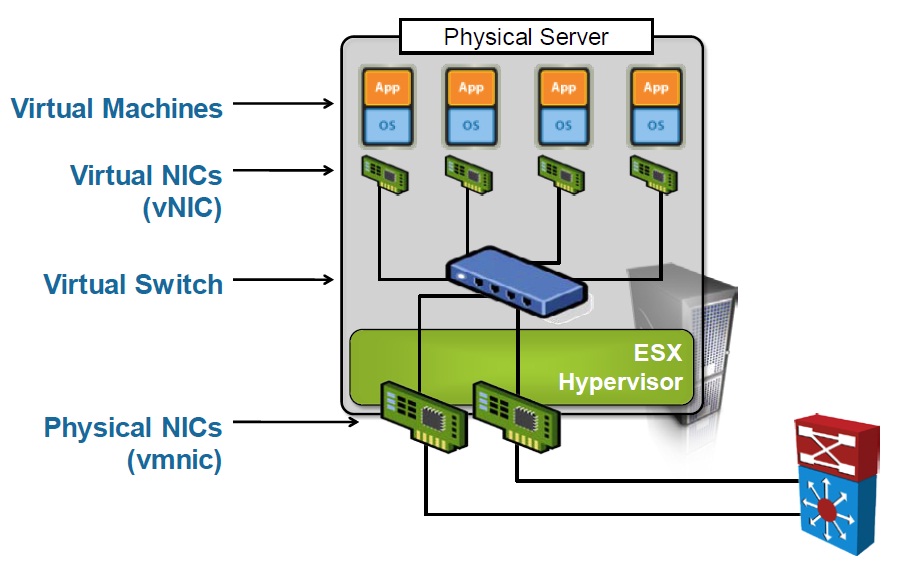 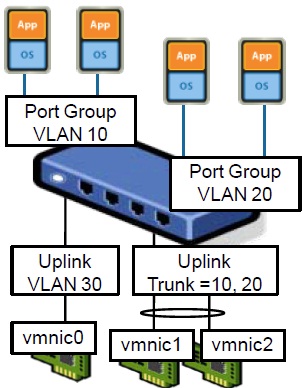 Now the question that arise what are the technical differences between the vSwitch and the physical switch :

With VMWare virtual distributed switch the switching fabric reside virtually across multiple VMware ESXi hosts , and this feature enable VMs to migrate smoothly from one VMware Vsphere server to other, also the vDS provide centralized management via its integration with VMware Vcenter.

Cisco has developed the first third party vDS switch that works with VMWare virtual infrastructure. The Cisco Nexus 1000v series switch to some extent provides same features, managment and functionalities to network Admins they used to have with physical switches but the switch now delivered as a software rather than hardware

There is a new Cisco Nexus 1010v delivered in appliance, but the actual vSwitch concept is still the same software and the hardware just for offloading the control plane processing form the VI servers

Nexus 1000v (aka N1K) has several features that are currently only supported by N1Kv such as:

As mentioned earlier there will be no deep dive in any specific topic but only high level discussion of the concepts. Understanding the architecture of Nexus 1000v is crucial in the design of virtualized network environment with Cisco UCS and VMware, now what are the component of Nexus 1000v ? and how the overall architecture of this software looks like in a virtualized environment ?

To answer these questions we need first to understand what are the components of the N1K:

And this is like the Ethernet module of the physical switch but the difference here is in each ESXi host there will be a VEM that communicate and controlled by the VSM , VEM replaces the ESXi Vswitch, provide each VM with a dedicated port

The most commonly used approach is the L2 connectivity where three type of VLANs have to be created Management, Control and data VLANs: 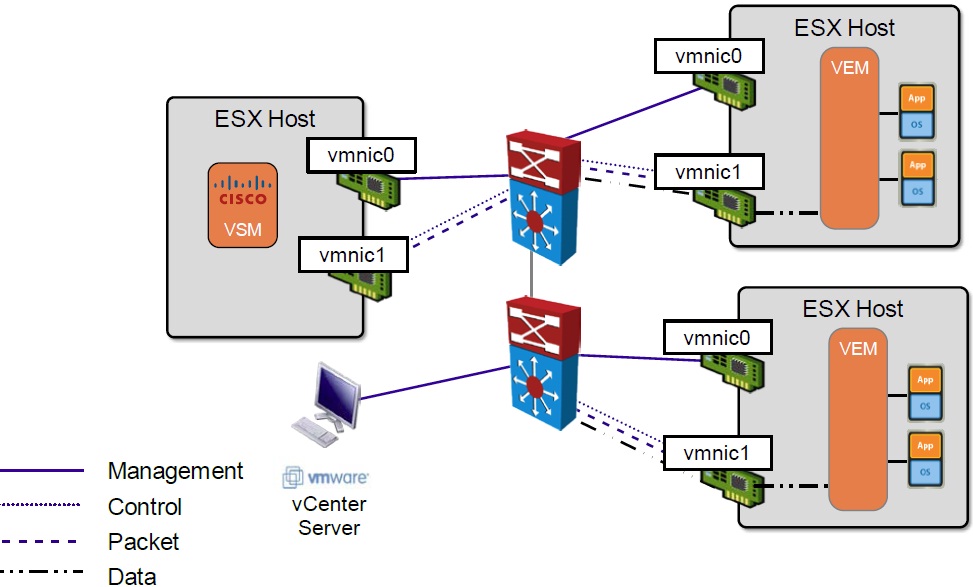 Earlier in this document several concepts and methodologies of virtualized switching and networking have been described with more focus on Cisco Nexus 1000v vDS switch. Before we discuss how this virtual network world can connect to the physical Data center Network world we need to understand in a high level what Cisco unified computing system UCS can offer to this virtualized environment from networking point of view as this document focus on the network part only.

Cisco UCS offer many features, functions and capabilities that boost the virtualized infrastructures deployments and make it more scalable and manageable from the physical layer ( power and cabling with the unified I/O ) up to the application layer UCSM and Layer 8 user experience

For more information about Cisco UCS please refer to the bellow link:

In a high level cisco UCS component are as shown below: 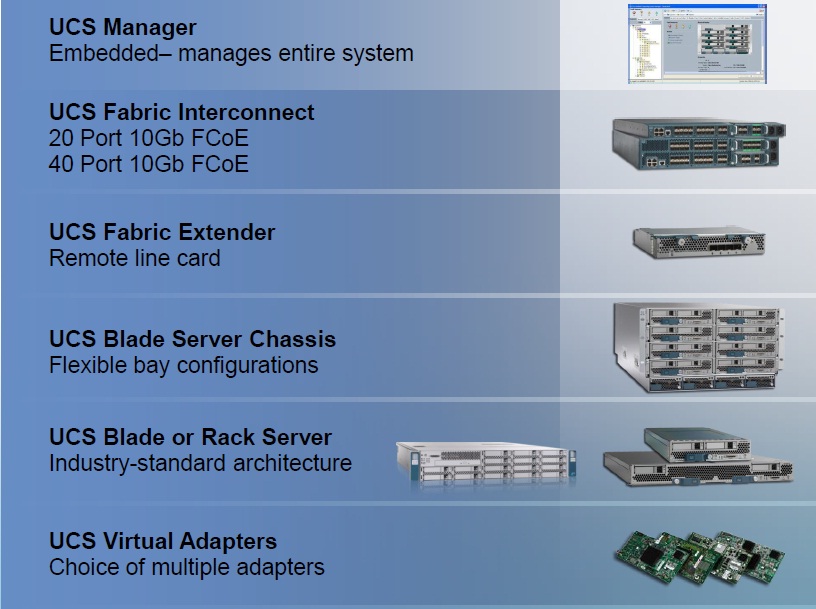 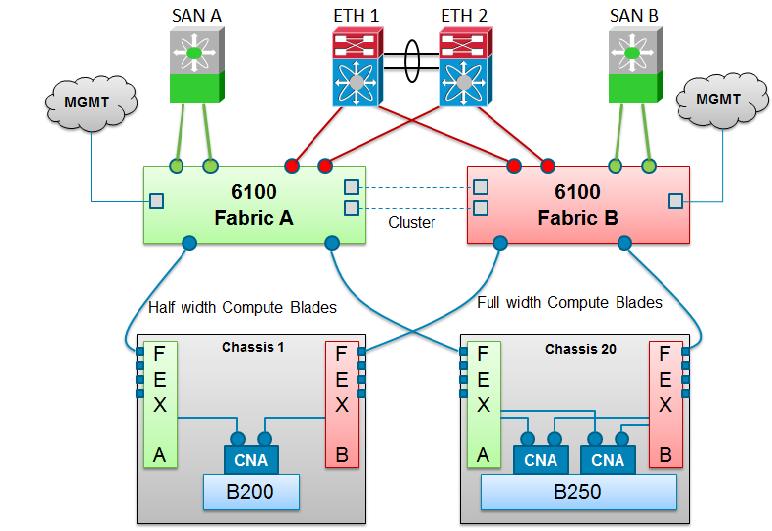 Although this physical connectivity look standard but based on the NIC card used in the UCS platform the vNetwrking logical connectivity will be different in conjunction with Cisco N1K vDS as a virtualized switch . Cisco UCS offer different type of NIC that can be used and each has different capabilities which can be selected based on the network design requirements:

The bellow figure shows the logical architecture of the cisco virtualized interface VIC: 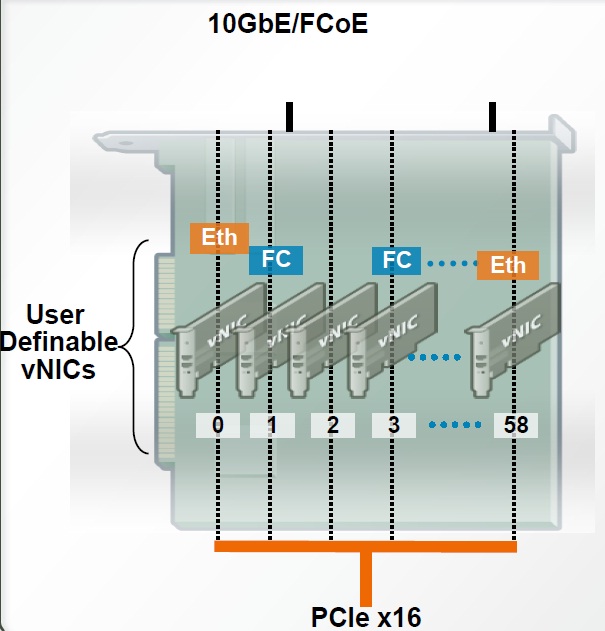 the bellow figure is taken from Cisco Live 2011 ( end to end Data Center virtulization ) which describe and summarise the whole concept:

While the software vn-link is just uses the entire concpets of VSM with VEM described earler in this document and al of the Networking configurations and Admin is done via N1K VMS CLI including the pining and links aggregation.

As described above if the N1K going to be used with VSM for vNetwokring ( vNetwiorking in software ) the all of the configurations of the uplinks, link aggregation and pining have to be done using VSM CLI. Just like any physical access switch the design and configurations are dependant on the aggregation layer switchs and how these switches have been designed such as aggregated/clustered with some sort of virtualizations concepts such as vPC or VSS as this will affect the way of designing N1K uplinks

There are different way that N1K VEM can connect to the upstream switches:

Static pining provide the ability to select specific VMs/traffic type to use Specific uplinks selectively, for example vMotion can be enforced to use a specific uplink and this design still preserve the concept of active/standby during failover situations 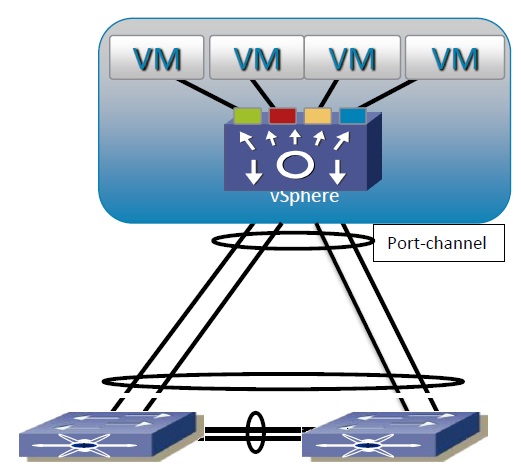 Cisco UCS and Quality of Service

With the modern and converged networks and Data centers that carry many real time sensitive data such as voice and video in conjunction with some business critical applications that require some bandwidth grantee QoS become a very important component that need to be considered when designing any networking solution not to mention cisco UCS uses fiber channel over Ethernet which require the FCoE to be prioritized and lossless and using Cisoc Unified communications on UCS ( aka UC on UCS ) make QoS more important and deterministic element in the Data Center Design.

Cisco UCS uses Data Center Ethernet (DCE) to handle all traffic inside a Cisco UCS system. System classes determine how the DCE bandwidth in these virtual lanes is allocated within UCS. Cisco UCS uses only L2 COS and these values range from 0 to 7 (where 0 is the lowest value and 6 is highest value). COS 7 is reserved for internal traffic

For example using the virtualized NIC vNIC has several benefits such as ability to have multiple virtual interfaces and each interface assigned to different QoS policy that being allocated a COS value and treated differently within the UCS system based on the QoS requirements, so we can have up 8 queues in theory but normally there is one queue/COS reserved for FCoE ( by default COS 3 ) and other one used for management, and the reset can be allocated as per the design requirements.

However this design approach is not always the best, for example UC on UCS better work with the use of Nexus 1000v QoS capabilities to mark the traffic on the VM port for L3 DSCP value mapping to L2 COS value as the UCS dose not map L3 DSCP to L2 COS and Cisco UC applications mark the traffic ( signalling and media with DSCP only ), cisco N1K here will be working just like any L2 access switch and can perform the L3 DSCP mapping to L2 COS and UCS can priorities traffic based on this COS value and pre-configured policies

23 Helpful
Share
Latest Contents
loop prevantion -mac move
Created by goranje on 12-01-2020 02:59 AM
0
5
0
5
Hello, I have DC infrastructure with 2 switches Nexus 7710 and need to implement loop prevention for mac-move between the interfaces. Because option with  command "mac address-table loop-detect port-down" is not available on Nexus... view more
Free “How to” Webinars for Cisco Intersight (Space Limited)
Created by Kelli Glass on 11-30-2020 05:17 PM
0
0
0
0
If you currently have a subscription of Cisco Intersight, a cloud-based tool for managing Cisco UCS and HyperFlex infrastructure, then Cisco Customer Experience (CX) is offering you FREE access to five live webinars that are in early field trial. Space i... view more
Customer Connection Briefing - Cisco Intersight: A Platform ...
Created by Kelsy Tibshraeny on 11-30-2020 12:42 PM
0
0
0
0
Cisco Intersight is evolving to be a strategic platform for Cisco’s cloud operations strategy. Join the Intersight product team to: Get a demo of the Cisco Intersight Workload Optimizer services Learn how Cisco Intersight delivers advanced infrastructure... view more
GRE Tunnel Cisco ACI
Created by a.azambuja on 11-30-2020 12:18 PM
2
0
2
0
Does anyone have already configured a tunnel GRE on cisco ACI?I´m migrating from 6500 and need to migrate some tunnel interfaces to ACI. Regards.
ACI Operational Modes
Created by visitor68 on 11-30-2020 10:43 AM
4
0
4
0
Folks, hope everyone is doing well. It's been a while since I approached this issue and a long while since I had any interaction with ACI. Please remind me of the different modes that ACI can run in...I think one is "Application Mode" or "Application Cent... view more
CreatePlease login to create content
Discussion
Blog
Document
Project
Video
Related Content
Discussions
Blogs
Events
Videos
Projects
Content for Community-Ad