Currently we are relying on solutions such as MPLS/BGP for fabric sites to talk to each other and prefixes are exchanged between fabric sites using the above technologies using Border routers to steer traffic.

This document helps us to implement SD-Access Distributed Campus that uses SD-Access Transit to interconnect multiple SD-Access fabric sites. The design follows the Cisco SD-Access of running independent Mapping Systems on each fabric site, so that they are run as independent administrative domains.

What is a Fabric Site ?

A “Fabric site” is a portion of the fabric which has its own set of Control Plane Nodes, Border Nodes and Edge Nodes. Different levels of redundancy and scale can be designed per Site
by including local resources: DHCP, AAA, DNS, Internet, etc. A Fabric Site may cover a single physical location, multiple locations, or just a subset of a location.

What is a Fabric Domain ?

What is a Transit ?

Multiple Fabric sites in a single Fabric domain will be interconnected using a Transit.

There are two types of Transits:

IP- Based Transit - Leverages a traditional IP-based (VRF-LITE, MPLS) network, which requires remapping of VRFs and SGTs between sites.

SD-Access Transit can be used if customers have multiple sites connected via Dark Fiber links or DWDM Links or sites in same metropolitan area.

Picture below interprets the same 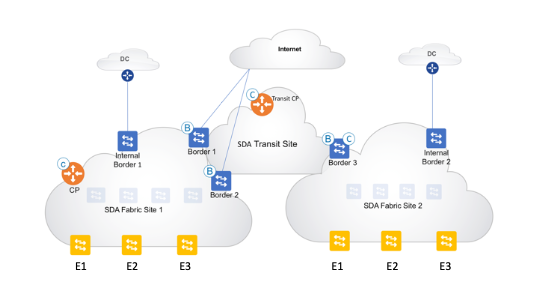 Which Border to Pick for Transit ?

When using Cisco DNAC to configure SD-Access Distributed campus with SD-Access transit we need to choose Outside world(external border) or Anywhere(internal +external) border when connecting to SD-Access transit.From the picture 1, we see that not every fabric site is connected to the Internet or Data Center. Border which is connected to the internet is the External Border and the Border connecting to the DC is Internal Border.

MTU Settings for Cisco SD-Access for Distributed Campus with Cisco SD- Access as a Transit.

To achieve end to end segmentation in a SD-Access Distributed Campus environment, we need to make sure that extra 50 byte of header is taken care of in the fabric and transit as well by having Jumbo MTU configured on all the devices. 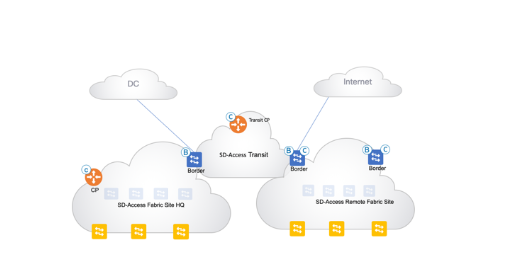 Alternatively, we can configure TCP MSS on Edge/Border nodes to achieve this as fragmentation is not supported in cisco SD-Access today. TCP MSS will have to be configured on the overlay SVI prefixes on Edge nodes and egress interfaces on Border facing outside the fabric and this will work for TCP applications in the fabric. We will send the packets with MTU set on the cli and hence no other known MTU setting is needed at the cisco SD-Access transit side and let’s say if your transport supports 1400 MTU then set the TCP MSS value to 1350 so that the 50 bytes is accounted for with VXLAN header. If we need to support UDP traffic over 1500 MTU as well then TCP MSS will not help. If the above caveats cannot be met then we have to use IP Transit instead of SD-Access Transit.

Supported Platforms for Border (as of Cisco DNAC 1.2.10)

Policy is defined on a global basis and is relevant to the end-to-end Fabric.

The enforcement of the policy is done by default at the Edge Nodes of the multi-fabric network.

Policy Enforcement. Scalable Group Tags (SGTs) will be preserved as traffic traverses the Border Nodes between Fabric-sites and the Transit.

In a SD-Access distributed deployment, you can have ISE PSNs dedicated to each of the fabric sites or for larger deployments where you have more than 2 PSNs at a site, we can have PSNs centrally located at a data center behind a load balancer and point the VIP of load balancer from DNAC settings

Note: Mobility across Fabric Sites is not supported 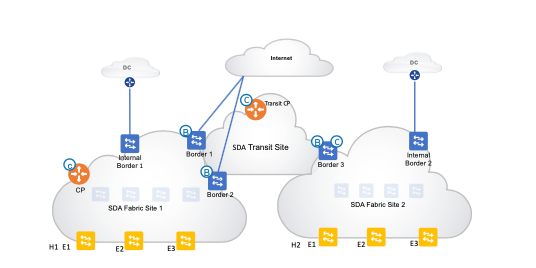 H2 behind E1 in fabric site 2 trying to reach Internet 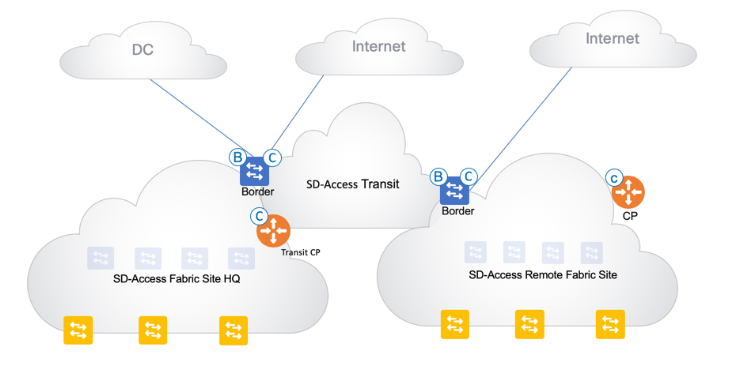 10 Helpful
Share
Latest Contents
SG300-10P to SG300-28P Not Passing Tagged Traffic on Trunk P...
Created by Bruce Speidel on 06-28-2022 03:38 PM
1
0
1
0
I have two switches a 10 Port and a 28 Port.  I need a single trunk on each switch so that I can tag two VLAN's of traffic.   I must admit I have fretted over this configuration for a couple months.  For the initial configuration, I have se... view more
ThousandEyes Enterprise agent deployment via DNAC
Created by alessandro.s on 06-28-2022 02:33 PM
2
0
2
0
Hi all,i'm installing ThousandEyes app on cisco 9300L switch  with version 17.6.2 via DNA center version 2.2.3.5, during the installation steps is mandatory to provide an ip address for the agent statically or dinamically . To configure a static addr... view more
Cisco Champion Radio: S9|E24 Cisco Radio Aware Routing
Created by Amilee San Juan on 06-28-2022 01:30 PM
0
0
0
0
Listen: https://smarturl.it/CCRS9E24 Follow us: https://twitter.com/CiscoChampion  Cisco Radio Aware Routing addresses several of the challenges faced when merging IP routing and radio communications in mobile networks, especially those exhibiti... view more
Cisco Champion Radio: S9|E23 The Cisco Catalyst 9136 Wi-Fi 6...
Created by Amilee San Juan on 06-28-2022 01:21 PM
0
0
0
0
Listen: https://smarturl.it/CCRS9E23 Follow us: https://twitter.com/CiscoChampion The Wi-Fi 6E Catalyst 9136 access point takes advantage of the 6-GHz band to produce a network that is more reliable and secure, with higher throughput, more ... view more
Rcv-Err on notconnect SFP Port
Created by TY92 on 06-28-2022 01:10 PM
1
0
1
0
Hello, Trying to understand the root cause behind an incrementing amount of Rcv-Errs on SFP ports that have no SFP Module or a connection. I should state, the switches that are experiencing this behavior are in a stack of at least 3. I've seen this o... view more
Ask a Question
Create
+ Discussion
+ Blog
+ Document
+ Video
+ Project Story
Find more resources
Discussions
Blogs
Events
Videos
Project Gallery
New Community Member Guide
Related support document topics