Most of the time we will find that we are polling big tables that will request a lot of CPU cycles to have them computed, sorted and sent back to the client. Sometimes we may find that some MIB are just responding slowly due to other issues or even because of a bug, or that the client is polling the server in a too aggressive way.

The router will suffer high CPU at the time it is being polled by a client, and this can be checked using the show process cpu <sorted> command at the time of the high cpu. We'll find SNMP Engine process taking all the CPU resources:

The problematic OID causing the high CPU will typically be slower than the others, that could also cause some timeout when the client request this OID. Most of the method below will attempt to find the OID that provide slower answer as they will most likely be the ones causing the high CPU.

show snmp stats oid will display the last OID that have been polled, it has been introduced in 12.4(20)T and 12.0(22)S releases. It will display the timestamp and is ordered, the goal will be to identify the OID that did respond slowly. This command will also be helpful if we want to find what MIB are being polled more often by the client.

The above example was taken during an snmpwalk on the full router MIB. We can see that the atEntry.1 took 18 seconds for being computed, which suggest that the CPU may have been busy to compute those data.

Debugs must be used with caution on production router, those debugs may be very chatty and can lead to an unresponsive router if precaution were not taken.

Using debug snmp packets will allow us to see at what time a query from the client enters the router, and at what time the router generated the reply and sent it over:

This is pretty obvious but it's worth to mention that simply doing an smpwalk to a router from a CLI client, and observe what OIDs seems to be answered slower than the others (or even just timing out) and/or correlate this with the start of the high cpu on the router is an easy way to find the guilty ones.

Another way to find the packets that were answered more slowly by a router would be to use a sniffer capture. SNMP client usually runs on windows/unix devices, it should be easy to get a sniffer capture and filter it based on source/destination address in wireshark. In the below exampled, I used a simple filter in wireshark to find all SNMP packets from my router at 192.168.0.1: "ip.src==192.168.0.1 and snmp"

We can graph the packet rate for this filter and we'll have a very visual way to find where the flow started to become slower. After that, we can simply check what was the GET request for those slower packets and we'll find the OID in the SNMP request in the payload. In the below graph we see the flow rate going down starting the 44th second. 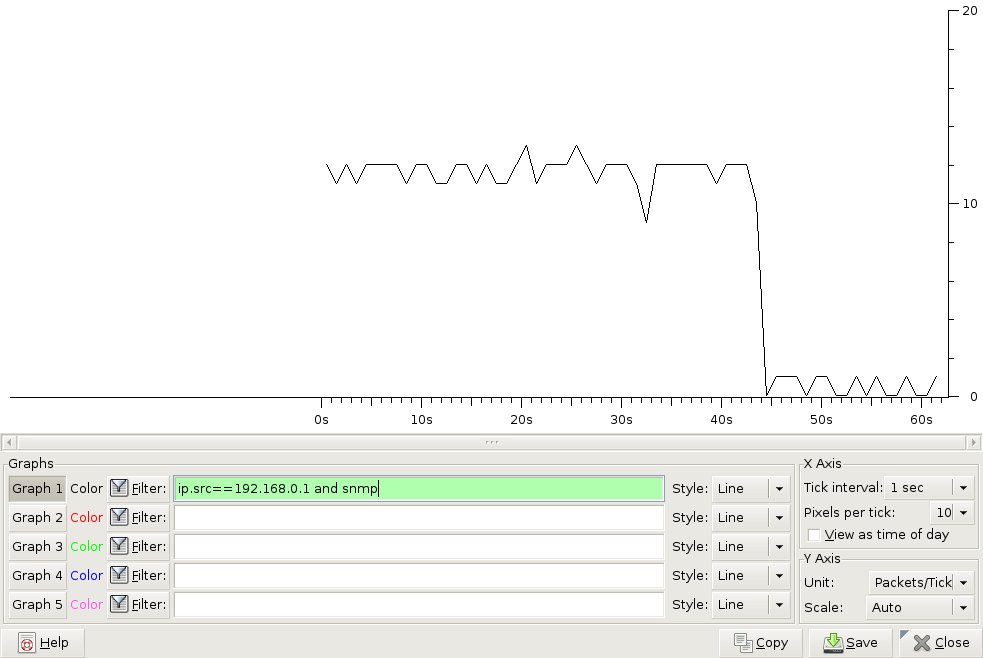 You will need help from Cisco TAC to decode it, but using CPU profiling is probably the best way to understand what the CPU is doing. However, this has to be taken only during the high cpu, see Appendix A below if your image supports EEM scripting.

CPU profiling is explained in the following documentation, you will need to replace profile task interrupt which will be used to profile interrupt only, by profile task <PID> where PID is the process ID of the SNMP engine process as seen in show process cpu, it's 189 in the second paragraph example.

The result of show profile terse will have to be analyzed by a Cisco TAC engineer, a show version is also needed to decode it.

This command is meant to troubleshoot high cpu in SNMP Engine process. Unfortunately it's only available since 12.3(23)BC10 12.2(33)SCC trains, for UBR10k routers.

Appendix A: Use an EEM script to capture a CPU profiling during high CPU

After the script has run, simply connect to your device and take a show profile terse

Appendix B: How to create an SNMP view

To verify that we identified the correct OIDs, or to workaround the high CPU once the problematic OIDs has been found, and the root cause of the issue can't be fixed directly, we can exclude the MIB containing them from the SNMP server using an SNMP view. Here a very minimalist example to exclude the  atEntry MIB, we change:

A question When detecting the OID that is generating the high consumption of the CPU, what action can I take to suppress it?