Cisco Community present at Cisco Live EMEA 2023. See you in Amsterdam! Learn more.
Turn on suggestions
Auto-suggest helps you quickly narrow down your search results by suggesting possible matches as you type.
Showing results for
Search instead for
Did you mean:
Create a new article
Options
1584
Views
9
Helpful
0
Comments

Don't know about Named EIGRP? Then read this to learn all about it.

I usually find it easiest for me to learn when I have side by side examples. I was having trouble finding any really good resources on configuring Name EIGRP. However this morning I was reading the release notes for IOS-XE 3.11S (for the ASR 1001 specifically) and I saw a new feature called EIGRP Classic to Named Mode Conversion. The command does exactly what it claims, converts Classic EIGRP to Named. Let's take a look a very basic example.

And finally, the results in running config. 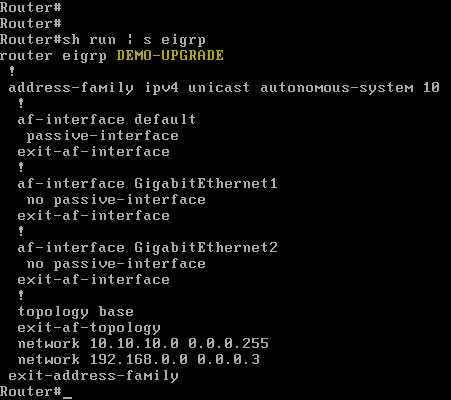 Nice! Currently it's only available in IOS-XE, but there is no need to fret, download the eval of the CSR1000v. It too runs IOS-XE and the screenshots above were taken from one. No licensing needed!