The user is unable to connect to ASA using ASDM

This document gives you a brief about ASDM.

Cisco's Adaptive Security Device Manager (ASDM) is the GUI tool used to manage the Cisco ASA security appliances. ASDM is a free configuration, monitoring and troubleshooting management tool that comes with the ASA.  In a nutshell, ASDM will manage all the features of the ASA appliance including FW, IPS and VPN.  Unlike its big brother Cisco Security Manager (CSM), ASDM is made to configure a standalone ASA one at a time.  CSM is the tool you would use to manage and share policy across multiple ASA's, routers, and IPS appliances.

First, installing the tool.  You can download ASDM from cisco.com or from your ASA itself.  You can then run it inside a browser or download the ASDM launcher so it runs as its own application on your PC.  I highly recommend ASDM launcher as the way to go.  The ASDM launcher works for both Windows and MAC OSX.Once launched it will look like the below image. 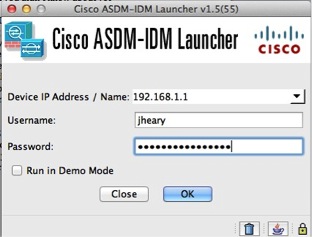 To resolve the problem

Issue the management-access inside command In the ASA configuration.

ASDM Launcher fails to connect to ASA and stuck into the following message "Contacting the device. Please wait..."

Please refer to this document: