Turn on suggestions
Auto-suggest helps you quickly narrow down your search results by suggesting possible matches as you type.
Showing results for
Search instead for
Did you mean:
Create a new article
Options
6305
Views
0
Helpful
8
Comments

The support for Line Card based Subscribers in IOS-XR BNG came in Release 5.1.1. Prior releases only had RP based Subscriber (Access interface as Bundle Interfaces) support.

In RP based Subscribers, the entire Control Plane is run on RSP. The important processes like iedged, dhcpd, subdb_svr, ipsub, etc runs on RSP. Also, the feature control plane (<feature>_ma) runs on RSP, while the hardware programming part (<feature>_ea) runs on LC.

The problems associated with RP based subscribers are as follows

Running the control plane in such a distributed manner allows for higher fault isolation on the router. This allows certain LCs to fail without affecting subscriber sessions on the other LCs in the system. Only subscriber sessions built on that LC is lost. 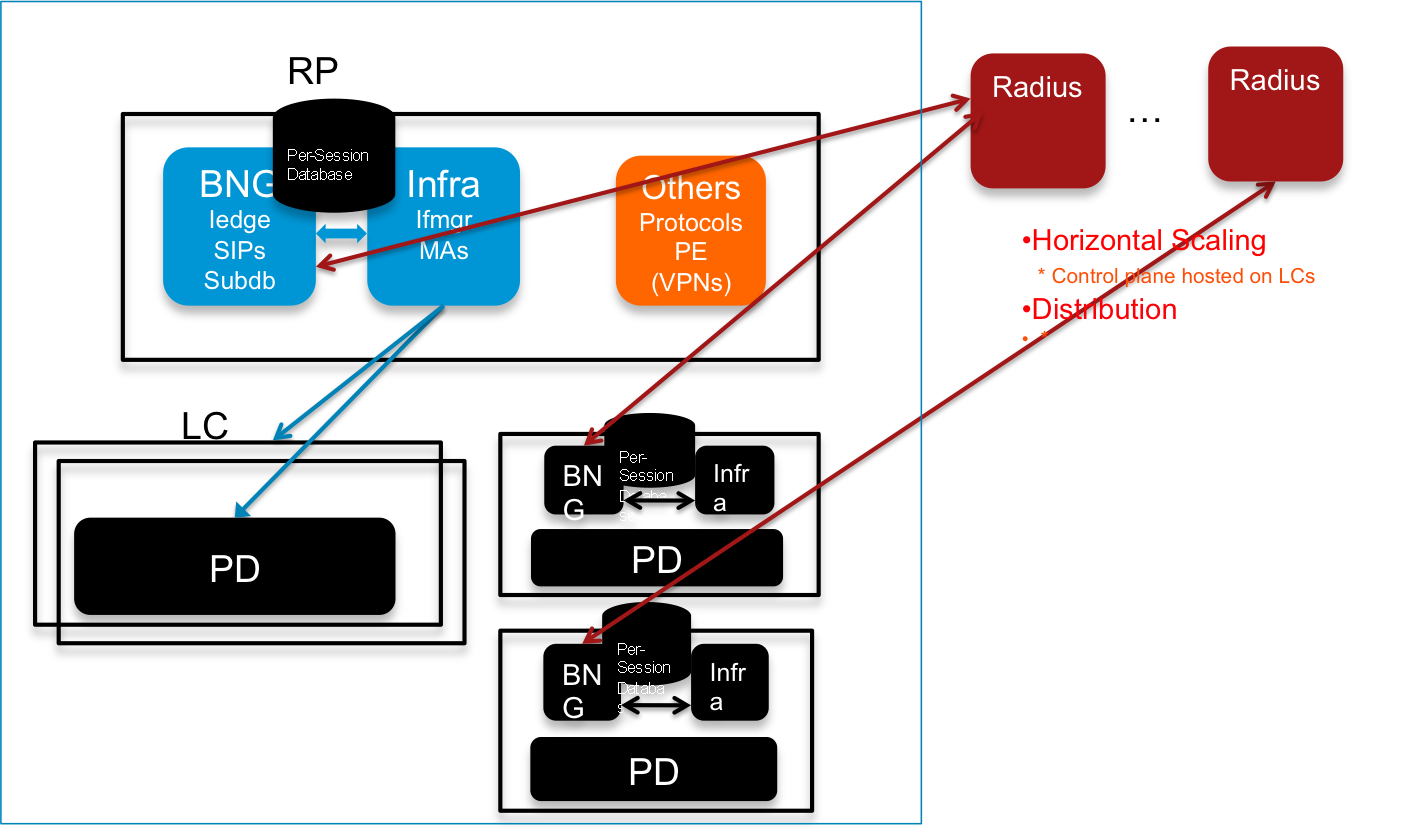 Here, the subscriber controller plane is replicated to every LC on the system. Every LC will offer 8 Gig of physical memory. Hence, as more LC's are added to the system, horizontal scaling becomes possible. By doing this, memory and CPU on RP is freed up which can be used by Multi-Service Edge (MSE) Profile, allowing the ASR9K to provide significant cost benefits to the service provider. In an MSE environment, not only must the router support BNG functionality, but it must also provide other services, such as high scale BGP and other routing protocols, L3VPN/L2VPN services and other edge/aggregation functionalities.

Note that the linecard should be of the "SE" or Service Edge variant.

Also the ASR9001 will support BNG.

Trident linecards are not supported for subscriber termination, but they can be used as core facing linecard for transport

Unlike RP based subscribers, where each line card holds only data plane related information, in case of LC Based subscribers, the subscriber information is stored primarily on the line cards. LCs on the ASR9K are quite powerful and have nearly the same amount of physical memory as the RSP.

For every LC subscriber, there is a certain amount of data stored on the RSP as well, primarily as:

IM’s G3P database is used by processes running on the RSP to obtain information about all interfaces, typically by routing protocol processes to be able to run their protocol or by show commands to display interface name to handle mappings.

IM process running on LC will only poll interface which are local to LC. IM process on RP polls interfaces on each nodes of the system. This is done for show commands, converting ifh etc. Protocol on RSP's need to know what there on LC. IM on RP currently keeps a copy of LC. This limits scaling higher.

SADB database in iedge is needed primarily for two reasons.

RIB route addition is unavoidable and has to go via RSP.

DHCP on RSP maintains shadow bindings. On LC OIR, DHCP on RSP replays bindings back to LC after LC comes back up.

Calls-per-second (cps) is defined as the number of sessions that can be brought up in a second.

In Bundle subscribers, control plane runs completely on the RSP, while the data plane runs completely on the LC. As a result, the control plane and data plane provisioning can happen on different CPUs and hence can happen in parallel. At the same time, due to this separation, there is a significant number of inter-node IPCs between the RSP and LC.

For subscribers terminating on physical interfaces, both the control plane and the data plane run on the same node, sharing the same CPU resource. As a result, the amount of CPU available to bringup the session is limited. The CPS achieved on a single LC, therefore, is lower than the CPS achieved for Bundle subscribers. At the same time, the two planes don’t have to communicate with each other using inter-node IPCs, as a result that CPU should be available for processes.

A significant gain in performance is achieved for LC subscribers by the distribution of control plane to multiple LCs. This allows us to make use of each LC’s processing power to process more sessions. As a result, even though the LC is less powerful and has to run both the control plane and data plane on the same CPU, in aggregate, the entire chassis can reach much higher scale and performance than RSP based subscribers.

Approximate target CPS is listed in the table below, assuming 64K sessions per LC and adding as many LCs needed to scale to the appropriate level.

(The configs are same as that of Bundle based subscribers)

First thanxs for the detailed explanation.

For better redundancy DSLAMs in our network are connected to the ASR9K though a Bundle-Ethernet interfaces (Do not plan to change this soon since - need protection from link failures). Will PPPoE sessions terminated on Bundle Ethernet interfaces see any benefit by migrating to IOS XR 5.1.1 (e.g. in terms of scalability) or the improvements concern only PPPoE sessions terminated on a single Physical Interfaces?

There were quite a few enhancements done in XR 5.1.1 primarily in the areas of memory utilization and targeted performance improvements which applies to both RSP and LC Based subscribers. Hence XR 5.1.1 can get you a better CPS/Performance compared to previous releases.
With LC based Subscribers, the system scale supported doubles when compared to Bundle based subscribers. (256k compared to 128k). LCs run a Quad core PPC while RSPs run a Quad core intel, which is more power powerful. Hence there are advantages to both architecture.

With 128k subscribers in 2 LCs, the RP subscribers could give you a higher CPS. Further scale isn't currently supported with RP subscribers. Where the LC subscribers do well is when you add more LCs to the system as this would allow you to increase the overall scale and performance horizontally until you hit the max limit supported by the system. At lower scale, RP subscribers will provide higher cps. But in the centralized/RP model, as scale goes up, the cps tends to drop. With the distributed model, you can add another LC and you will get higher scale and higher cps.

Hope, I answered your question.

Yes Thank you for the clarification

when to clarified that in the article it's said that "Per-User QoS" is not supported, it's a little confusing, i prefer the words of "Parameter QoS" instead, which means downloading the parameters using radius attribute is not supported when you are running LC based session.  But you can still download the name of a service-policy which is supposedly defined on the 9K box to apply a qos to a session.

---following is supported by both LC and RP based session----

RADIUS issue and it's fix.

Following config may not working  in LC based context. The 9K fails to send radius message out in case that  there is no other UP physical interface within the vrf  in the LC terminating the session.

the symptom is no radius message sent out when the FSOL comes.

you can see following debug display

You can config a dummy physical interface under the LC and put it in the VRF.  the interface could be protocol down and the ip address could be anyone , since it will not be used as the source address of the radius message . the source ip of radius message is still the one under the loopback 1. It's just a trick to cheat the IOS XR system :)

First thank you so much for this article

Could you please tell me what is the minimum requirements (hardware + software + license(s)) to be able to have 128000 PPPOE sessions on ASR9000?

important update, LC based session service accounting has been supported from 5.3.2 release.

In summary, the client needs to achieve 256k subscribers in this chassis, is it possible or it will be necessary to have more two MODs? If I can distribute the subscribers between RSP and MOD, how would be this configs?