This document describes the procedure and concepts that can be used to configure the UCS for the networking on your LAN network. There could be many different VLAN configured in a LAN environment for different applications and purposes. For example one VLAN VMware ESXi server management and access purposes and another for the server application that is running on the VMware ESXi server as a virtual machine.

In UCS the implementation of VLAN is influenced by the concepts of End-host mode. The UCS system by default works in End-host mode. In End-host mode the UCS 6100 series fabric interconnect appears to the external LAN as an end station with many adapters.

Make sure you have read and undersood the following document. It will provide the foundation for the concepts discussed here

The IP networking between the virtual machine is done via the different type of adapters that are part of the blade server. There are four types of network adapters that are supported to provide functionality required for the diverse workload in a Data Center.

Follow the links above to take a look at the detailed description of each one of them.

The only difference between M71KR-E and M71KR-Q is that former has a Emulex fiber channel controller and later has Q-Logic FC controller.

In Unified Computing system (UCS) each VLAN is identified by a unique ID. The VLAN ID is a number that represents that particular VLAN. VLAN can be created in such a way that it is visible in either one fabric interconnect or both fabric interconnect. It is also possible to create separate VLANs with same name on both of the fabric interconnects but with different VLAN IDs. While creating a VLAN in UCS, the VLAN is also assigned a name but the name of a VLAN is known only within the UCS environment, and outside of the UCS the VLAN is represented by the unique ID.

The configuration and options presented in this document assumes that following guidelines are met and understood.

Make sure that the appropriate VLANs are created on the uplink switch (e.g CAT6500).

It is highly recommended to create all the necessary VLANs before configuring the Service Profile. 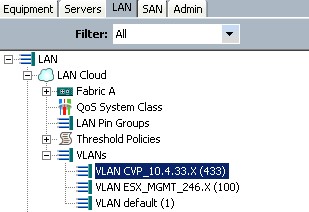 As mentioned before that it is recommended to create all the VLANs before creating a service profile. But UCS is flexible to accomodate and apply the new VLAN to the existing Service Profiles as well. So in this situation, few considerations should be made.

If you configure a VLAN after the Service Profile creation and if you notice that the "new" VLAN is not bind to the vNIC on the blade server then the solution is to modify the vNIC configuration and add the new VLAN to it.

Under the Servers tab in UCS Manager check to see if the "new" VLAN is visible or not. Following picture shows that the "new" VLAN 433 is not visible.

Shazhad, a couple of comments:

You mention, a couple of times, about adding VLANs before creating service profiles in case "VLANs will not bind to vNICs" and "so you don't have to reboot the switch".  I think this confuses people a little... I appreciate you're trying to suggest a best practice, but the reality is that many customers _will_ have to add/edit/delete VLANs and update their service profiles later, and this is always possible and never requires a reboot.

So perhaps it's a language thing but if I was a customer reading this doc I'd get the impression that UCS isn't as flexible as it actually is...  so instead of saying it's difficult/problematic to change VLANs, I'd suggest writing how easy it can be with Updating vNIC templates, perhaps?

Keep up the good work!

Thanks Steve for the the feedback. I will fix the document accordingly.

Specific to a VMware or other like clustered environment. Illustrating the use of VNIC Templates for consistent easy management of serveral nodes from one control point would be beneficial.  We use vNIC template exclusively for our internal ESX Clusters network configurations.

I agree completly that vNIC templates and service profile templates are great for ease of management in terms of configuration. I will try to have that illustrated in this doc. I delibrately skipped that part because I wanted to keep this doc very simple. The intention is that this deployment guide will be referenced by Unified Communications customers/engineers/admin in the future. And typilcayy this is the level of details that they would need to understand the Data Center pieces of the puzzle.

Latest Contents
SPAN Session - Source IP
Created by udo.konstantin on 06-29-2022 05:54 AM
1
0
1
0
Hello, I need to configure a SPAN Session.  What should be configured in the Source IP / Prefix field? On some ACI deployment I saw arbitrary IPs like 3.3.3.3 or anything like this.  Any suggestion?    Kind regards Udo
Adding Leaf Port to Pre-existing VLAN in ACI
Created by CarsonDavis56998 on 06-28-2022 04:18 PM
1
0
1
0
Hello, I have been requested to add two ports in ACI to a specific VLAN within our ACI fabric on two different leaf switches for a downstream server. Usually this would be a task for our DC Team but unfortunately they are all out/sick this week and possib... view more
Block SSH traffic from outside to leaf and spine
Created by Adhiputra on 06-28-2022 12:14 PM
3
0
3
0
Hello   We have configured oob address for our apic and leaf+spine, Is there a way to block ssh traffic from outside to leaf and spine while connection to apic is still allowed?   Regards
Using moquery to find EPG's that lack a specific Domain
Created by AukeyPeach on 06-28-2022 09:19 AM
0
0
0
0
Hi all,   I need to audit our env and I need to complete a search and have it return all Tenants and EPG's that have lack a specific domain, this is so we can find out where we need to update them.   The moquery I'm running at the moment is: &nb... view more
Cisco PCCE and Webex Connect Integration
Created by dennisharfin on 06-27-2022 11:47 PM
0
0
0
0
Hi Everyone,    how we can integrate Cisco PCCE onpremise solution and Cisco Webex Connect cloud-based solutions? in terms of interaction and reporting.Thanks!
Ask a Question
Create
+ Discussion
+ Blog
+ Document
+ Video
+ Project Story
Find more resources
Discussions
Blogs
Events
Videos
Project Gallery
New Community Member Guide
Related support document topics