Software defined networking can be defined as a new approach to design, implement and manage networks that is based on the concept of separating the network control plane and data plane, where the control plane provides an abstracted centralized view of the network.

With the classical networking approach, both of these functions as co-exist on the same network device.

Using the SDN approach, as highlighted earlier these two functions are separated, in which the control plane is Centralized and the forwarding plane is ket distributed.

As a result, SDN provide the ability of administering traffic and deploying services centrally to address changing business needs, without having to touch each individual switch or router in the forwarding plane.

OpenFlow can be considered as the first (SDN) standard that is managed by Open Networking Foundation (ONF) which facilitates the communications interface defined between the controls and forwarding layers of SDN architecture. Moreover, SDN facilitates innovations and enable efficient services automation by providing open, application programmatic interfaces (APIs). 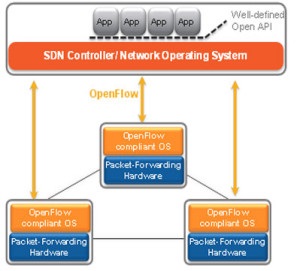 According to ONF, the main key benefits of OpenFlow based SDN:

However, OpenFlow based SDN lack to scalability, visibility, security and associated with complexity and disjoint overlays. Cisco introduced a new approach and architecture that is driven from SDN with more emphasis on the most important part in the Data center which is the application, called Application Centric infrastructure ACI . 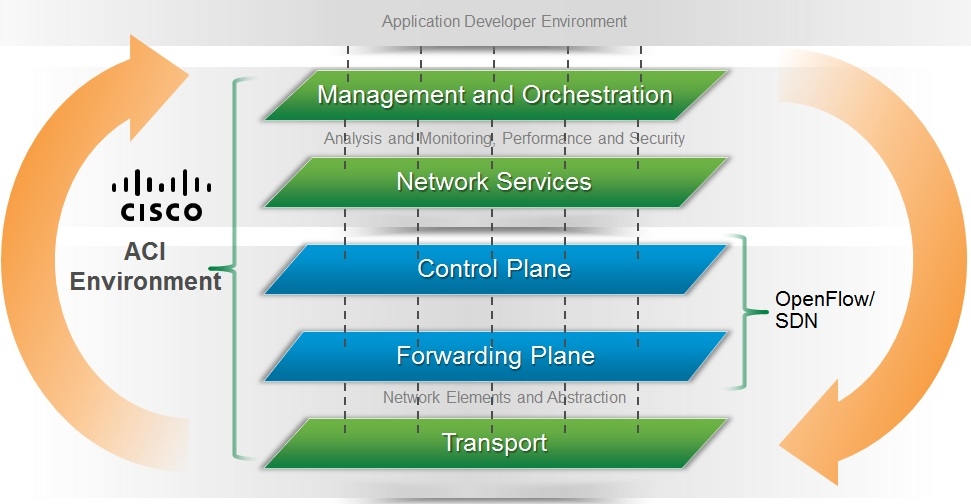 This article will discuss Cisco ACI approach and architecture.

What is Cisco Application Centric Infrastructure

Application Centric Infrastructure (ACI) in the data center is a holistic architecture with centralized automation and policy-driven application profiles. ACI delivers software flexibility with the scalability of hardware performance that provides a robust transport network for today’s dynamic workloads. ACI is built on a network fabric that combines time-tested protocols with new innovations to create a highly flexible, scalable, and resilient architecture of low-latency, high-bandwidth links

Key characteristics of ACI include:

Cisco ACI architecture is a combination of high performance Hardware and software innovation and intelligence integrated with two important concepts from SDN solutions; overlays and centralized control. However the ACI utilize different approach and offer capabilities that goes beyond the typical SDN offering or what is known as Openflow based-SDN

The Cisco ACI fabric is designed as an application-centric intelligent network. The Cisco APIC policy model is defined from the top down as a policy enforcement engine focused on the application itself and abstracting the networking functionality underneath.

The Cisco APIC policy use an object-oriented approach based on promise theory. Promise theory is based on declarative, scalable control of intelligent objects, in comparison to legacy imperative models, which can be thought of as heavyweight, top-down management.

With this declarative model, using a centralized policy controller, you can define the policy centrally and push it out and the endpoint should have the intelligence to abide by that policy. Therefore, these network nodes are not treat as dumb devices, because the intelligence solely resides in the controller, instead the the controller will tell the network node(s) what dose it needs to provision, change delete etc, but not how to be done. 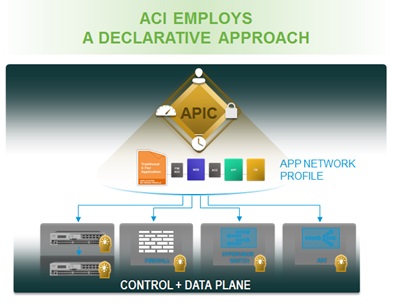 The APIC centrally push policies to the underlying infrastructure using an extensible policy protocol designed to exchange abstract policy between a network controller and a set of smart devices capable of rendering policy called OpFlex. Cisco is proposing OpFlex as an informational RFC to the IETF and plans to lead the standardization process through that forum. At the same time, Cisco is working with the open source community to provide an open source implementation 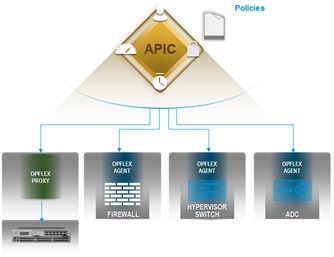 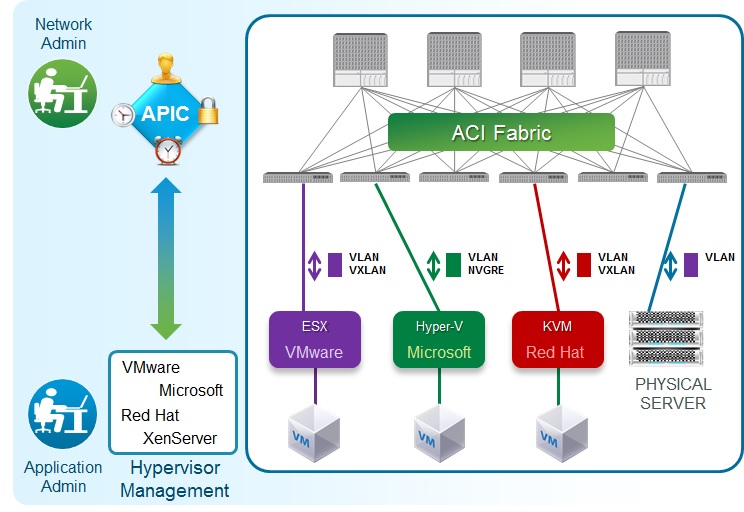 The Cisco Application Policy Model can be extended to both physical and virtual workloads in existing Nexus infrastructure through the Cisco Application-centric Virtual Switch (AVS), an APIC-enabled Nexus 1000V virtual switch, or by deploying Nexus 9000 switches as a remote leaf within customers' existing data centers. The Nexus 7000 Series switches and ASR 9000 Router will also be integrated into the ACI fabric

The new Cisco Services for ACI are designed to help customers achieve their business and technical objectives, while reducing risk.

Excellent document i have ever read about SDN

Good doc. and to the point 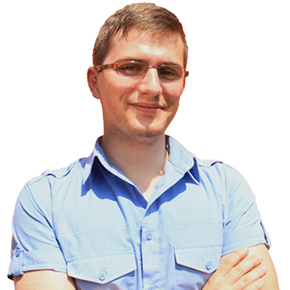 Awesome! Could you please advise on any additional resources for SDN and ACI?

Strange that nobody hasn't noticed this yet, but obviously here should be Data plane, not Control plane in this phrase.

"Control plane on the other hand, you think of it as the muscular part where all the heavy load of the traffic forwarding happens. "

Latest Contents
Nexus 9332C SGT/SPX
Created by thorchin on 10-26-2021 08:35 AM
0
0
0
0
Hi, Any knows if Nexus 9332C support TrusSec SGT/SXP GBP policy for SDA Access solution? We need to implement the Fusion Role with the nexus, but we cant find information if they support SGT/SXP. Thanks in advance!
Upgrade Nexus 5k with FEX: do we use GIR/maintenance mode or...
Created by laurent.dewilde on 10-24-2021 11:36 PM
0
0
0
0
Hello all, We'd like to upgrade our 2 Nexus 5672UP switches from version 7.3(2) to 7.3(8). 6 FEX's are single-attached to these devices. 3 to nexus 1 and 3 to nexus 2. They're thus not connected in a vPC. The question is now: is it recommended t... view more
Nexus7706 to Nexus7710 migration
Created by yasir.ilyas on 10-24-2021 09:07 PM
0
0
0
0
Hello, Need migration assistance. I have  double  sided  vpc between POD core(N7706) and multiple Pod  Access  switches(N9ks) and HSRP resides alongwith  STP  primary  on Pod  Core 7706s. I need&nbsp... view more
Is is possible to operate aci app on apic simulator??
Created by oyhskw on 10-24-2021 07:14 PM
2
0
2
0
Hi.. I installed aci simulator (4.26o) on vm. Then, I upload aci app (Citrix_ADCManager) by apic gui. However the installation failed... like below  Could I test ACI app (stateful or stateless) by aci simulator?  is it possib... view more
Issues pushing DCNM template to Nexus 9k switches
Created by CarsonDavis56998 on 10-24-2021 04:36 PM
1
0
1
0
I have just deployed DNCM within a small greenfield DC environment. Thus far , I have been able to discover my switches and have them populate within my inventory of fabric switches. However, when I go in to actually push out my created fabric template I ... view more
Ask a Question
Create
+ Discussion
+ Blog
+ Document
+ Video
+ Project Story
Find more resources
Discussions
Blogs
Events
Videos
Project Gallery
New Community Member Guide
Related support document topics