I'm having a problem when I try to load the WSDL file for the "Invoke Web Service" activity in System Center Orchestrator.     .
I'm trying to create a connection between Orchestrator 2012 R2 and Cisco Unified CM 10.5 through a Web Services. When I click the WSDL file and I click the "Format Hint" button appears the following error "Object of type 'System.Int32' can not be converted to type 'System.UInt64'." 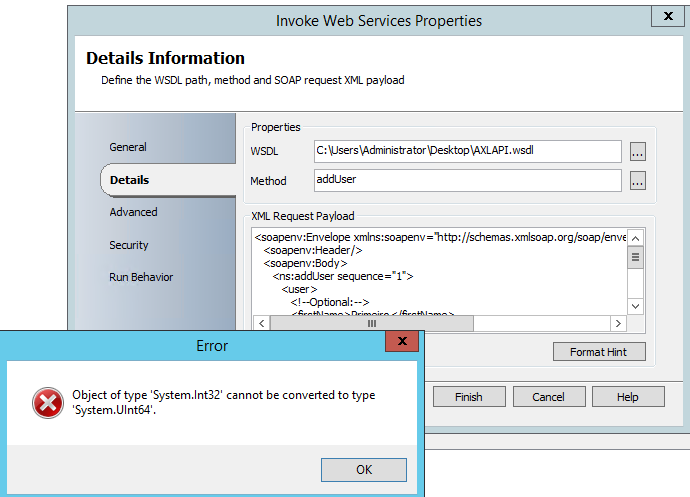 The WSDL file that Cisco Unified CM I exported in another tools works fine, tested and working well. In Orchestrator just gives the error.

Can anyone help with this?

I think a Little Trial & error is in order here. Check the addUser request in the Schema for any integers / Longs. I assume they are all ints.. so you may try to Change the Schema to Longs and see if it then works (or the other way round if values are Longs).

Thank you for your reply. I was looking in xml files and i didn't find any int or long. I'm looking in the wrong files?

Rising star
In response to pinheiro85

The command you're trying to execute is addUser. Looking at the Schema documentation on developer.cisco.com, the Input message for that command is AddUserReq - you can find that object in AXLSoap.xsd, and it contains an XUser, which in turn has at least two XInteger tags (maxDeskPickupWaitTime and remoteDestinationLimit).

It may be something else though.. what's that you're pasting into "XML Request Payload"? It Looks like a complete command with headers and everything. I have no idea about the tool you're using.. but I see a comment at the bottom of the text area - why would you want to send a request containing comments? And are you really supposed to plug in the entire command with headers and stuff and not only what I deem the payload (starting with <user> and ending with </user>.. to me the rest is Soap plumbing.. but my Definition of payload may differ from Microsoft's).

Also, given that orchestrator seems to use .NET, have you done the necessary modifications to allow a Generation of a proper .net Proxy? (if you download the axl Plugin from cucm it has a readme that mentions some stuff you Need to do for use in .NET).

And, can Orchestrator pick up xsd references from wsdl files? (I'm asking because when you creat a stub with wsdl.net or svcutil.exe you Need to manually specify the path to all wsdl and xsd files..).

I was pasting into "XML Request Payload" for troubleshooting. Usually the box is empty but generates the same error.

I download the « axlsqltoolkit », and in the readme document i read that i need to execute the follow command wsdl.exe AXLAPI.wsdl axlsoap.xsd.

But i don't have any wsdl.exe in my server.

Do i need to install extra software?

Can you tell me what is the direct url to WSDL in CUCM 10.5? For methods like adduser or addgroup.