I have an interesting request from a remote-site not wanting to allow access to a public facing IP.  We have a tunnel between their ASA & ours which hairpins traffic to 2 networks out the outside interface.

(IPs have been changed to protect the innocent)

All traffic is initiated from the client's private network, so I would think the stateful TCP connections should allow this to work, & I was able to prove this works in my ASA lab with a simple hairpin nat, but it doesn't seem to be working on the real network with a tunnel involved.  Is there something I'm missing that I need to do to allow this to work?  Packet-tracer shows the NATing is working as expected, but it claims a deny at the end of the hairpin because it's no longer tunneled traffic once it's headed for the public internet.  I've seen in other forums that this is a normal limitation to the packet-tracer tool in regards to tunneled traffic.

I have same-security-traffic permit inter/intra-interface enabled.  Either one of my nat statements "should" work, but it doesn't seem to be doing the trick.

I've included a generic firewall in the drawing to show our public IP for the L2L tunnel is passed through another firewall to us, & that this firewall has the 172.16.0.0/24 network connected to it.

What am I missing to make this work as desired? 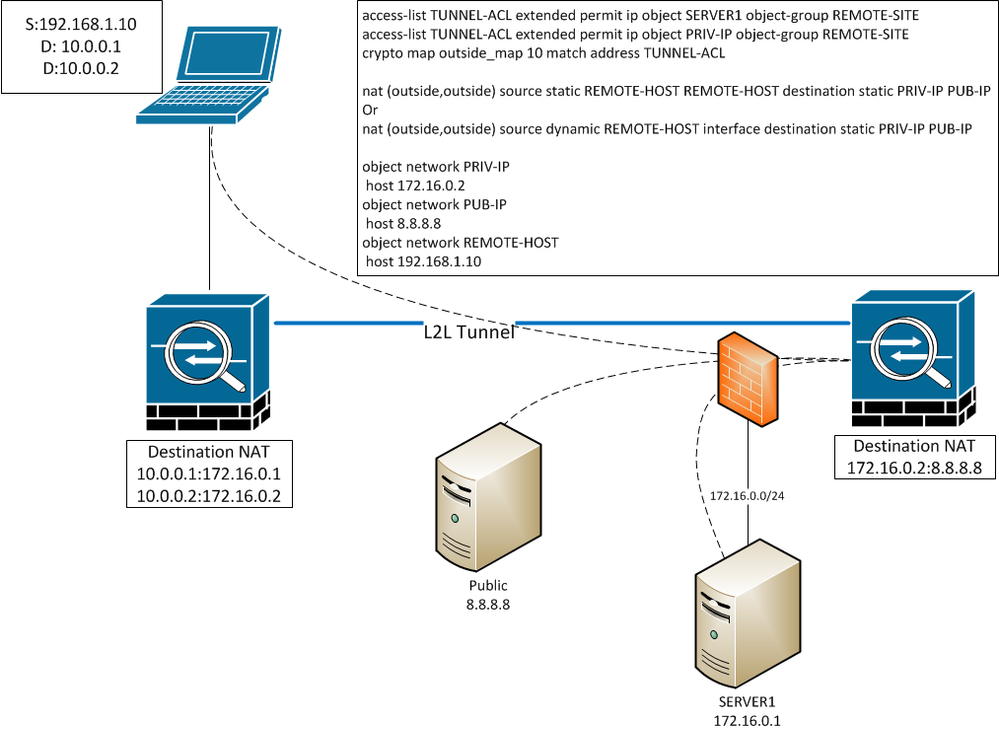 (EDIT/update with details on my ASA)

Frequent Contributor
In response to wstucky01
Can you add route-lookup at the end of the nat statement?

Beginner
In response to Florin Barhala

No, it will not accept that command.  I think I can only use that if I'm keeping the NATs the same on the statement.

Sorry for the delay- I was waiting on feedback if I could have the remote ASA NAT to the real IP before the tunnel but was just denied, so I'm back to trying to making this thrice-nat thing work again.

Beginner
In response to wstucky01

I ended up routing this traffic Inside instead of haripinning.  Funny thing is it still didn't work until I removed the network objects referenced in the NAT statement & added them back.  Since that fixed it, I didn't care to try it with the hairpin again to see if that was really all I needed to do.