The environment consists in:

2- Routers 2901 which will receive internet links

2- Catalyst 3750 acting as a core cause it’ll receive a few more services.

2- Catalyst 4506 which will be responsible to my distribution layer (server, farm, users and iSCSI).

No problem so far.

We’re going to set up both 4506 working active/active with the protocol GLBP, but the ASA does not work with this protocol (if I’m not wrong), so how can I make the firewall works fine with it?

I mean I need to know which protocol should I use, or what kind of configuration to use, to keep both 4506 working simultaneously.

I have no problem with use other protocols, so if there is someone appropriate to this case I’ll be grateful to know.

Also I don’t need that the both ASA working as Active/Active, but the distribution (4506) must to be.

I’ll appreciate all tips and ideas you guys could supply. 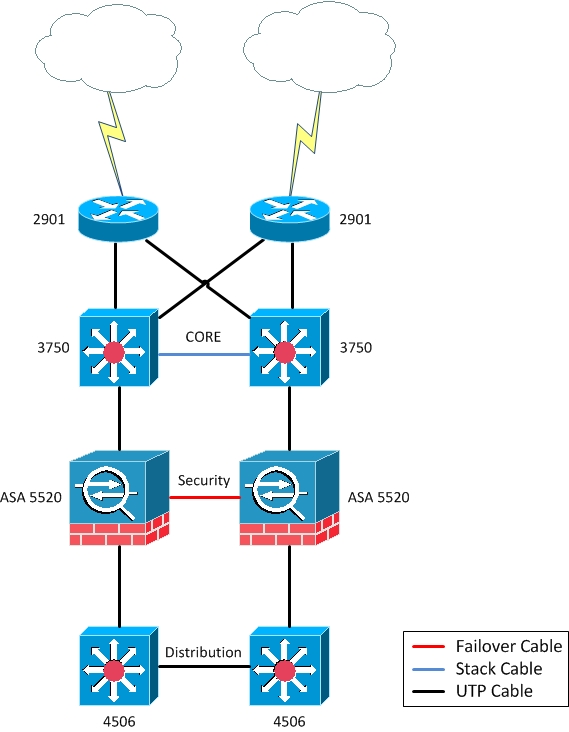 When you are using GLBP you must be careful, or your trunks may have much more traffic than you anticipated!

Also, why is it necessery to have Active/Active 4500, when you will have only one active FW?

Thanks for the answer!

I need both 4500 active/active cause i'm going to have a server with 4 nics and i'll connect 2 in each 4500 if one of then be in standby i'll lose two nics and how i'll use vmware in this server, two nics i'll be not enough. The same thing happens to the storage, I have just one nic for which SP, so the throuput won’t be enough nether.

Beginner
In response to edson.paula

You should use all 4 NICs, that is not in question, but think about this...

You have SW1 and SW2 (your core switches).

Host on SW1 sends ARP request. Since it is round robin, SW1 that is Virtual Active Forwarder, it can calculate to send VMAC of AVG (which is SW2), and you have your FW connected to SW1, so your traffic flow would be:

Host - > broadcast ARP, then Host connected to SW1 will send IP packets destined for VMAC of SW2, that will return the same traffic over trunk back to SW1 so it can over firewall...

On the other hand, you will have just 1 Gb port connecting your SW with firewall, so that is highest amount of traffic that can be transported either way.

I presume that most of the traffic will not go through firewall, because if it does, there is nothing much we can do.

So, for the traffic going to servers, 4500 will route them internally, wherever they are coming from.

Altogether, you don’t get anything fancy, and bandwidth utilized is about the same, just this is a bit neater ••J

On firewall side, you can use standard ASA Active/Passive configuration,

Configure ASA VLAN on switches, use /29 IP addresses and that’s it.

Do you have any better idea?

Latest Contents
Endpoint purge
Created by craiglebutt on 10-24-2020 06:42 AM
1
0
1
0
We have the Endpoint purge to delete any thing over 365 days, but this wasn't working as standard since in was installedSo disabled and enabled again and this seem to fix it, as had just under 200k endpoints captured. But it removed all clients that ... view more
Script to push/post all static routes on Firepower Managemen...
Created by Dv on 10-24-2020 03:07 AM
0
5
0
5
Problem: When we unregister FTD from FMC and re-register, all the static routes are lost on it. Sometimes device has database corruption, if re-image is the only solution then upon re-image, FTD comes up fresh and we need to configure everything from scra... view more
ASA 5585-X Howo change Secondary Active to Standby without R...
Created by MANFRED LIEBCHEN on 10-23-2020 01:07 AM
3
0
3
0
Hi,I have a very simple question; we have two ASA 5585-X working in Active/Standby Mode with multiuser Contexts.Normally Primary Unit is active for failover group 1 and 2; Secondary Unit is standby !At the moment our Secondary Unit is completely disconnec... view more
CCIE Security and Practical Applications in Today’s Network:...
Created by ciscomoderator on 10-22-2020 11:48 AM
0
0
0
0
Meet the Authors Event - CCIE Security and Practical Applications in Today’s Network: Zero Trust (Live event – Thursday, 29th, 2020 at 10:00 a.m. Pacific / 1:00 p.m. Eastern / 6:00 p.m. Paris) This event will have place on Thursday 29th, October 2020 at 1... view more
My company uses Microsoft Azure AD, can I sign into Cisco Se...
Created by diddly on 10-22-2020 06:34 AM
0
5
0
5
Question My company uses Microsoft Azure AD, and I sign into all my applications using that account. Can I use that account when I sign in? Answer Yes - all applications that support SecureX sign-on allow direct login with your Microsoft Azure AD accou... view more
CreatePlease login to create content
Discussion
Blog
Document
Project
Video
Related Content
Discussions
Blogs
Documents
Events
Videos
Projects
Content for Community-Ad