So, fair warning - I'm new to ASAs and am open to advice on best practices if anyone sees any red flags here.

I am trying to establish EIGRP neighborships with my inside switches (3750s) over the "Internal" interface, shown in green. The outside interface is g0/0 and don't worry, I've ensured EIGRP is not running there. 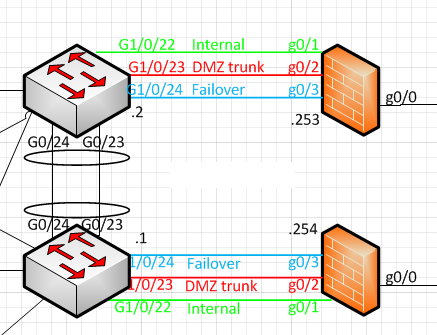 The problem I'm having is that I need to monitor the "Internal" link so that if it goes down, the ASA triggers the failover to the secondary firewall connected to the other switch. I was told that the "secondary" keyword was what enabled this:

This is fine since I am able to compare this config to the firewalls that are currently in production elsewhere in the environment and this is what's in use there. However, in order to run EIGRP all the way to the firewall and not rely on something else like HSRP for the inbound traffic, I'd like to run the corresponding links (Gi1/0/22) on the inside switches as routed ports (no switchport) so that I don't have to establish neighborships with SVIs or something like that. I want the routing to be done directly to the port, leaving the interfaces for failover and our DMZ set up as switchports, since those can be layer 2.

Labels:
Everyone's tags (5)
I have this problem too
0 Helpful
Reply
1 REPLY 1
Highlighted

Failover is based on the exchange of this well known hello packets in order to determine when an interface is up/down so failover can be triggered....

That being said with this particular desing if you want to implement failover on this internal interface you will need to place a switch in between so this two boxes can exchange this packets and ofcourse build the EIGRP neigborship,, that will be the only way around..

Julio Carvajal
Senior Network Security and Core Specialist
CCIE #42930, 2xCCNP, JNCIP-SEC
0 Helpful
Reply
Latest Contents
ASA 5506-x, firepower, can't update
Created by dm on 08-05-2020 10:54 PM
2
0
2
0
Hello! I run 6.2.3.15.When I click download updates in ASDM I get:Download updates failed: Peer certificate cannot be authenticated with known CA certificates I have 3 identical devices and all of them have the same problem.. How can I fix ... view more
Adding Exception Subnets to Umbrella Connector for ASA Firew...
Created by R. Clayton Miller on 08-05-2020 02:22 PM
0
10
0
10
You would like to use the ASA Firewall Umbrella Connector to enforce DNS policy with Umbrella.  However you would also like to exclude certain IP addresses or subnets from using this policy.  I recently had the need to do this, had a bit of tro... view more
Crytophgraic algoritms required by the secure gateway do not...
Created by latenaite2011 on 08-03-2020 09:33 PM
1
0
1
0
Hi Everyonem Just wondering if anyone knows why I am getting an error that says "Cryptographic algorithms required by the secure gateway do not match those supported by AnyConnect.  Please contact your network administrator.".  See attached... view more
20 Cybersecurity Considerations for 2020: Download the Cisco...
Created by Kelli Glass on 08-03-2020 02:57 PM
0
0
0
0
The Cisco 2020 CISO Benchmark Report provides valuable takeaways and data on the most pressing topics: the impact of vendor consolidation, cybersecurity fatigue, outsourcing, top causes of downtime, the most impactful threats, and more. The repo... view more
Stealthwatch Identity Certificate issue
Created by donald.heslop1 on 08-03-2020 02:24 PM
0
0
0
0
Hi, Has anyone run into the "Channel down" issue when updating the identity certificate on the Stealthwatch SMCv and SFCv. I'm doing a POC for a client and every time I go an update the identity cert the SMC says "it could save the configuration" and... view more
CreatePlease login to create content
Discussion
Blog
Document
Project
Video
Related Content
Discussions
Blogs
Documents
Events
Videos
Projects
Content for Community-Ad