This blog series looks at the most useful API for a network engineer who is getting started with scripting and API on APIC-EM.  The first blog covered the /network-device API.

When APIC-EM discovers the network, it builds an inventory of network-devices, interfaces and hosts. Those network-devices can have locations and tags.

This blog covers the interfaces and hosts connected to a network-device.

#2 interfaces and hosts on a network-device

One of the other tables kept by the controller is "/interface".  This table contains every interface on every network device.  While you can get a list of all interfaces via the API call, it is often more useful to get a subset of them…  for example those that are attached to a specific network-device.

As with previous blogs we will cover both the coding and non-coding way of exploring the API. Swagger is a tool built into the APIC-EM that lets you explore and run live API calls without needing to code. If you are comfortable with python, you can skip straight to the code section.

First a bit about swagger

The "API" button in the top right brings up the swagger pages.  The great thing is you can click on the "try it out" button for an API and run the REST API call directly on the controller. You get to see that REST call that was made plus the full response.    To access the always on sandbox at https://sandboxapic.cisco.com  User: devnetuser, Password: Cisco123!

Once in swagger, scroll to the "interface" API.  We need to look up the interfaces for a specific network-device.  We know from blog1 that a network-device ID is going to be required.  The API will be "/interface/network-device/{deviceid}". 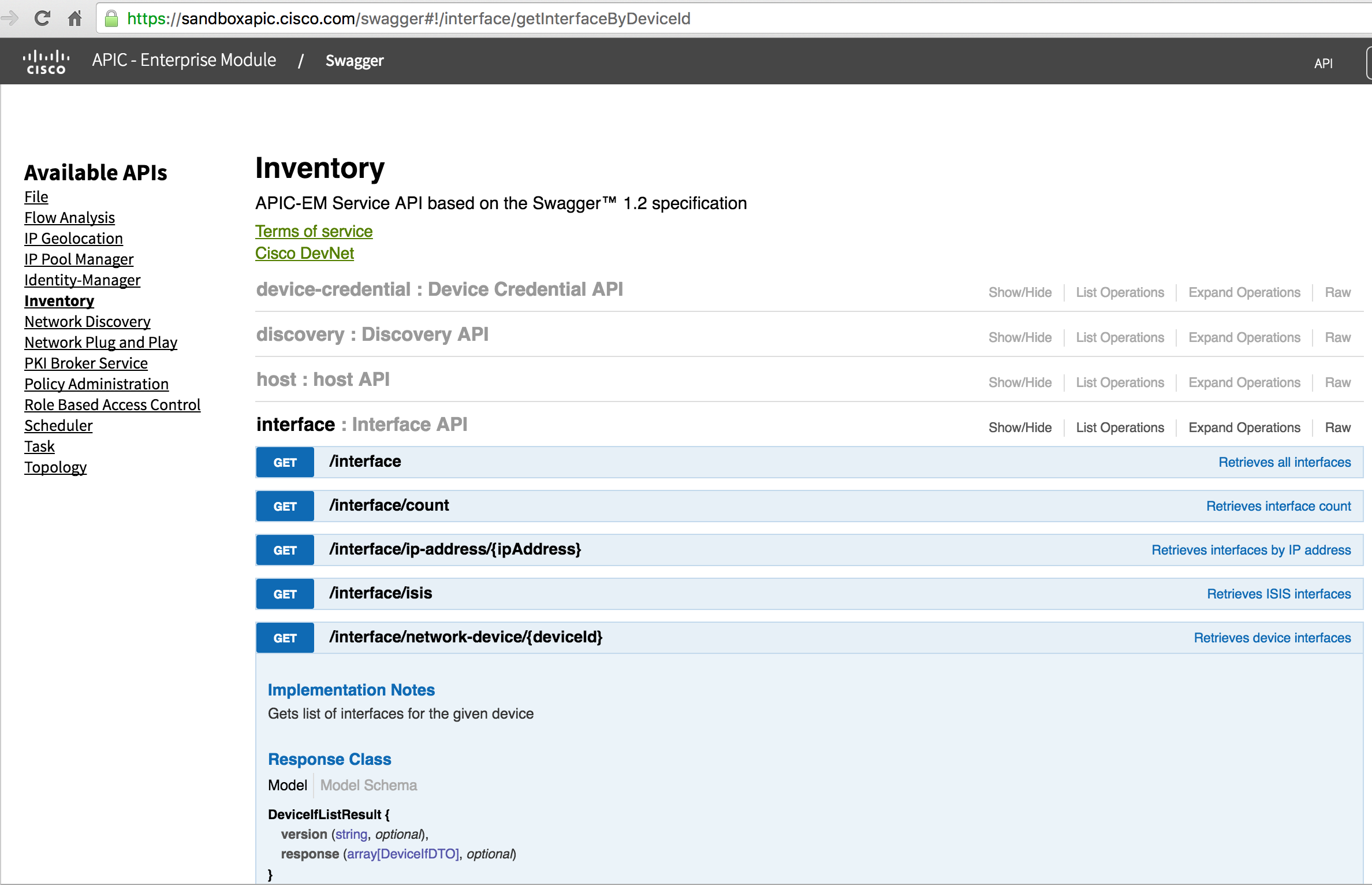 Set the scope "ALL".

Press "Try it Out"

You will see the following result.  Which shows all the interfaces connected to this device.   In the script section we will discuss the attributes and what they mean. 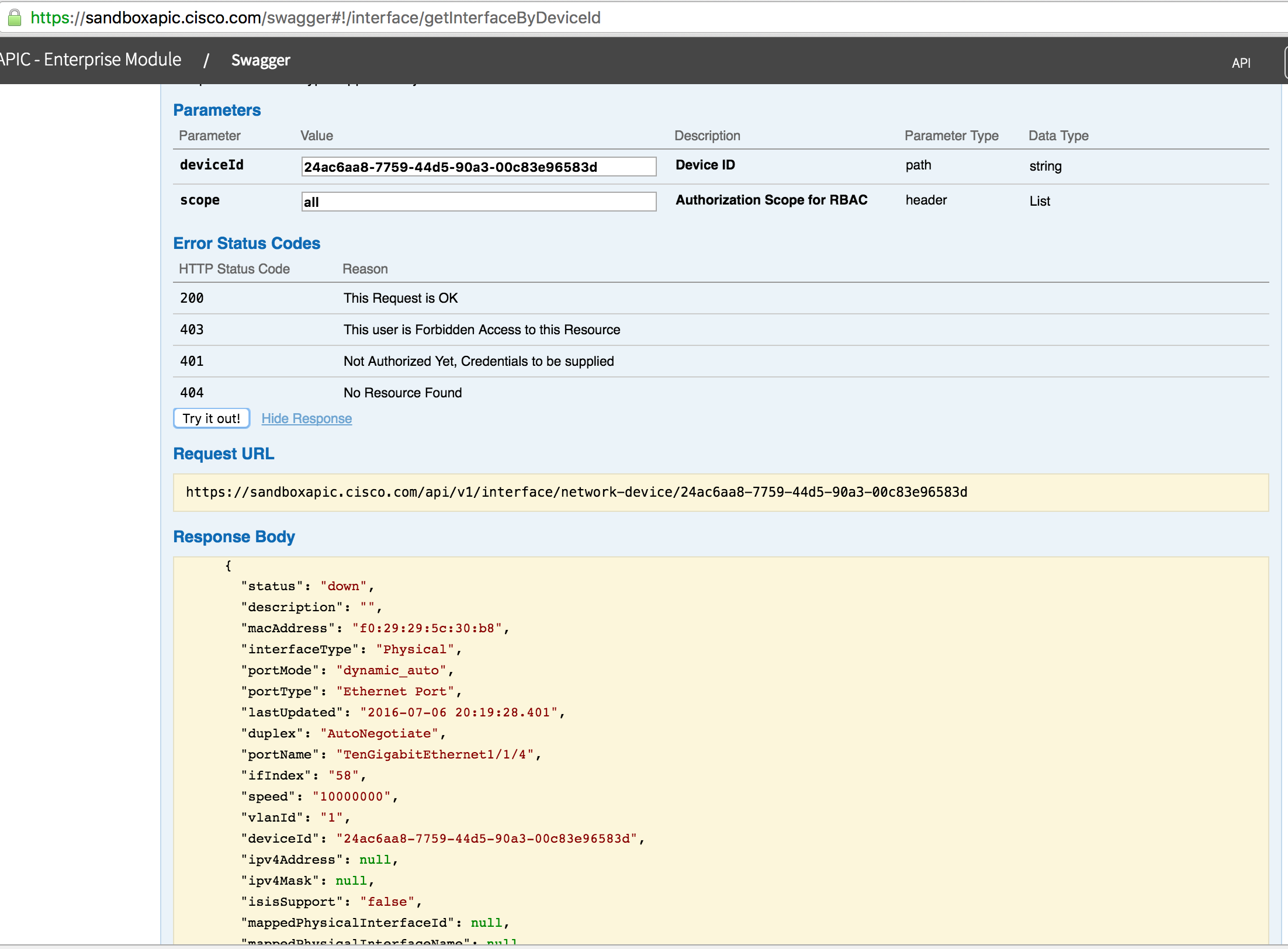 To see the hosts connected to this network-device, navigate to the "/host" URL 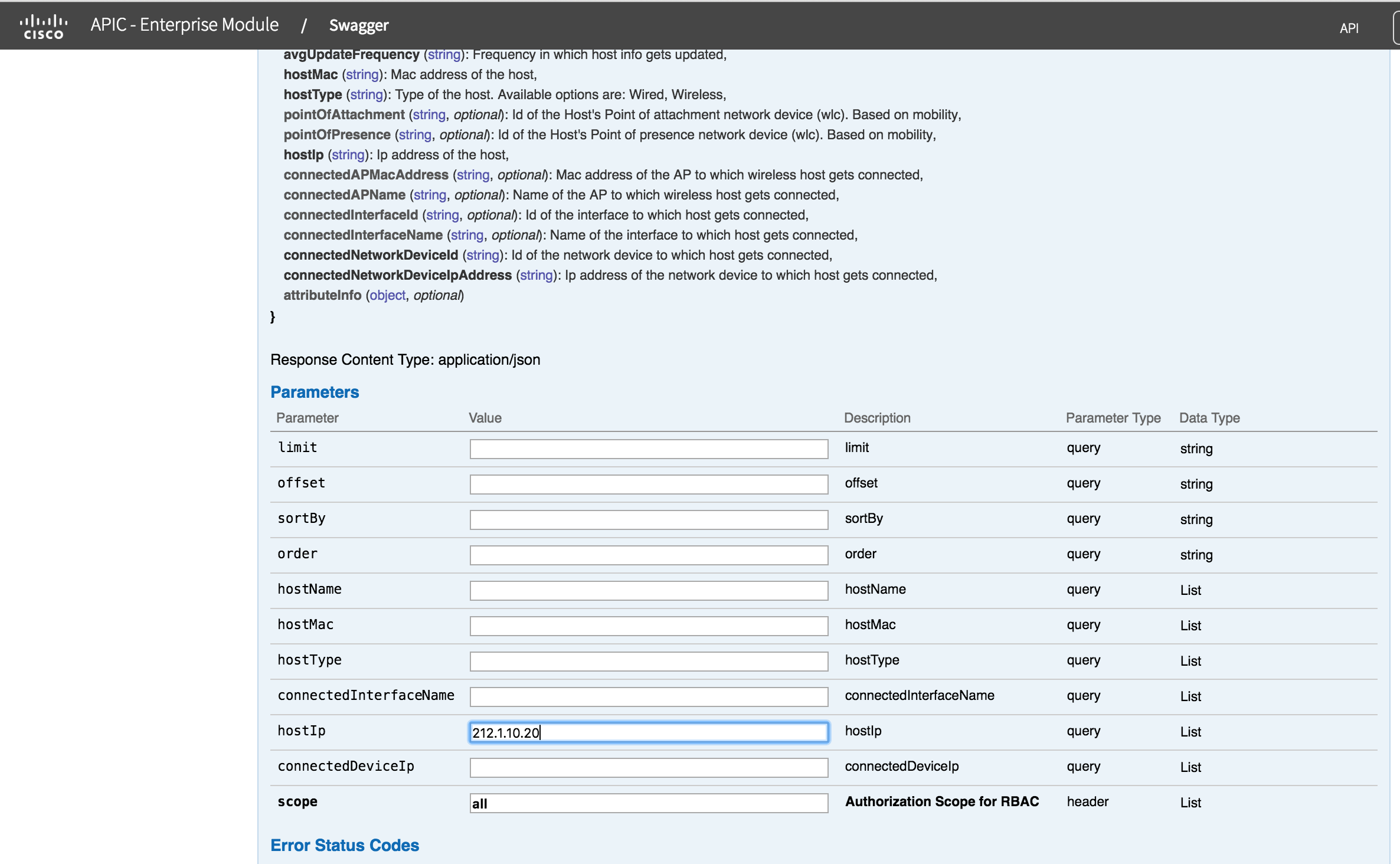 Scroll down to the parameters section, and input the "connectedDeviceIP" parameter of "212.1.10.1".  This is the IP address of the switch.  Scope of "ALL" and press, "Try it Out" 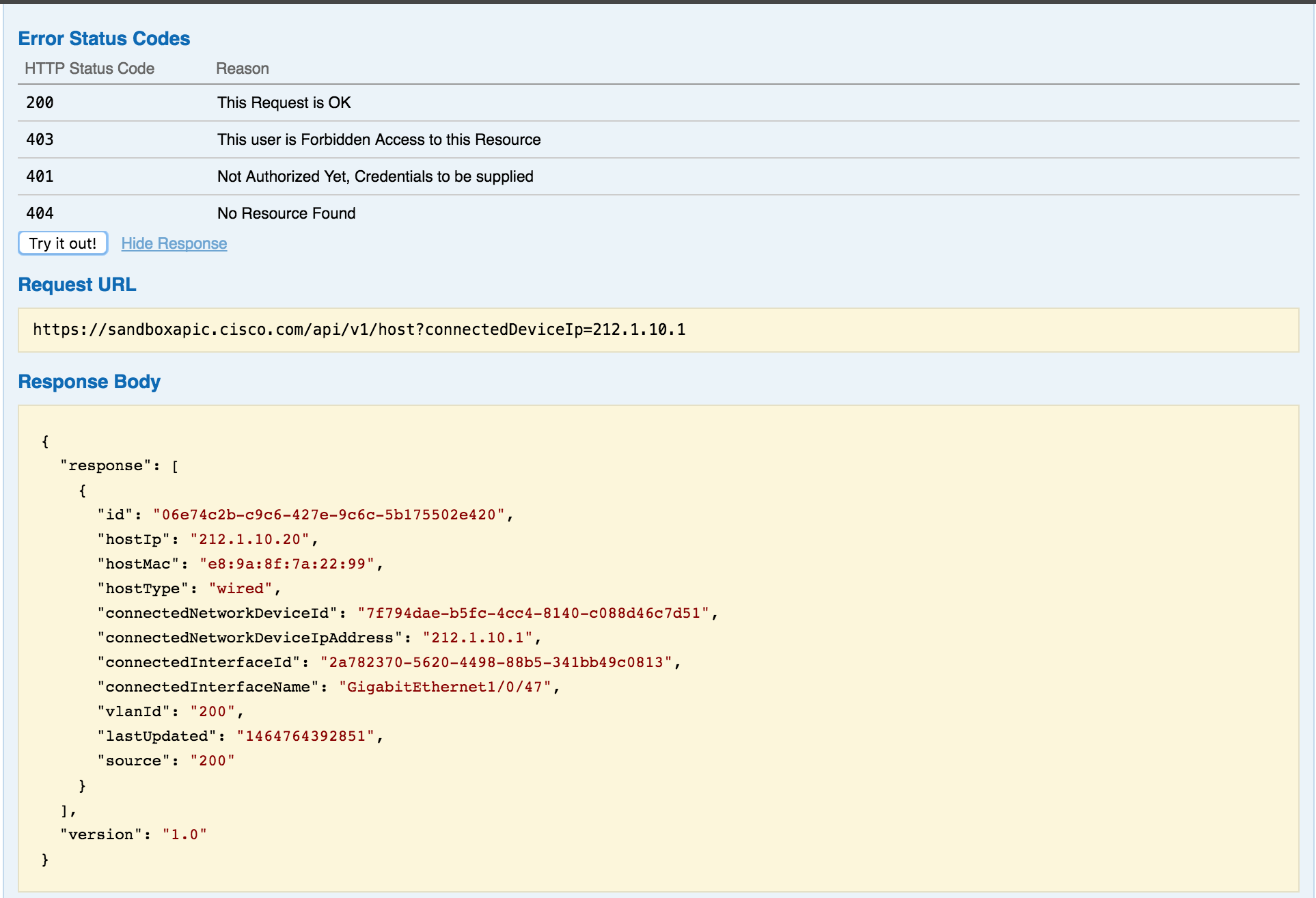 Blog 1 contained instructions for downloading the sample scripts from Github.

Let's take a look at how the code works.  The snippets below are from the "02_interface_device.py" python source code.

The code for this script starts to get a little more sophisticated.  There are two helper functions for the natural sort.  Some pretty advanced python to do this in a few lines, but remember, this is the reason the interface list is nicely sorted!

There is also a helper function to take a network-device IP address and return a UUID.  Internally network-devices are referenced by their UUID, to make this easier to use we map IP->UUID.

You are probably wondering why the first call is by UUID and the second can use either IP address (an absolute) or reference (UUID)?  The second call is a parameterized search, so can use attributes (of which there are quite a few options).  We will cover some more options for the parameterised search in blog 4 of this series.

The rest of the code just makes things look pretty.  There is an "if" statement to display things like trunks, connected hosts, IP address.

There are a number of useful tools built with these API calls:

This blog covered the /interface.  API The next blog in the series will look at /license and a tool for displaying all of the license information on a network-device.

In the meantime, if you would like to learn more about APIC-EM, you could visit Cisco Devnet.  All of the code samples can be found in the  Github repository.

Latest Contents
Passing deviation files to ydk-cpp in the bundle
Created by akpramod on 08-04-2021 08:58 PM
0
0
0
0
Dear community, I am using the ydk-cpp (generate.py -cpp) with --bundle option to generate the CPP files from yang. I have a few deviation files that need to be passed for different yang files. Is there a way to pass this information as part of the b... view more
Cisco pyATS Genie Ops: ospf.learn() fails on iosxr router
Created by nkalyvas on 08-03-2021 06:57 AM
0
0
0
0
I am trying Genie Ops Models on an iosxr Router (Cisco IOS XR Software, Version 6.5.3[Default]) interface.learn() works okisis.learn() works okospf.learn() --> the commands run, the output from the cli is flowing and then I get a Traceback: &... view more
Permission denied - Ansible Hands On NXOS Sandbox
Created by EvanC on 07-26-2021 07:28 PM
0
0
0
0
I'm playing with the Ansible Hands On lab with NXOS Sandbox On step 3, I understand the purpose is to create a playbook to copy a customized hosts file to replace the default hosts files stored in /etc/hosts However, when I run the playbook... view more
IOS XE command option json
Created by Salongo on 07-22-2021 05:39 PM
2
0
2
0
Hi Community, I was wondering if anyone has faced this issue. The below command option is not working for me: sh ip int br | json   OR sh ip int br | json-pretty. Version: IOS XE 16.12.5. Re/Saleh Re/Sal
IOS-XE Streaming Telemetry incomplete
Created by lukeberkheiser on 07-22-2021 08:41 AM
0
0
0
0
Hello,I'm trying to setup monitoring of IOS-XE devices using Streaming Telemetry to replace SNMP. I'm able to get some data through my Telegraf-Prometheus-Grafana setup, but it looks like I'm not getting all the entries in the YANG tree. My devices are ru... view more
Create ContentLogin to create content
Question or Discussion
Blog
Document
Project Story
Video
Idea
Related Content
Discussions
Blogs
Documents
Events
Videos
Ideas
Project Gallery
Content for Community-Ad