The first blogNetwork Automation with Plug and Play (PnP) – Part 1 in this series gave an overview of network Plug and Play and how it could be used on APIC-EM.  This blog goes into the details required to automate the following steps:

For the purposes of clarity and learning, the steps will be covered individually in isolation.  Each step will build on the previous one. For production use these steps could be combined, this will be covered in part 3 of the series.

A jinja2 template is used to aid the generation of configuration files.  The config_template.jnj file you can see there are two variables: "hostname" and "ipAddress".  The variables correspond to columns in the inventory.csv file. You can have as many variables as you like.

It is critical to have "end" as the last statement in the file.

Here is an example of running this script.  The output files are stored in the "work_files/configs" directory. Notice that a suffix has been added to the filenames to make them unique.  As the example scripts are using a sandboxapic in the cloud, multiple people can be running the scripts at a time.  This suffix should be unique, so you do not clash with other users.  In production you would not do this.

Now the configuration files have been created, steps #2, #3, #4 require APIs on APIC-EM. 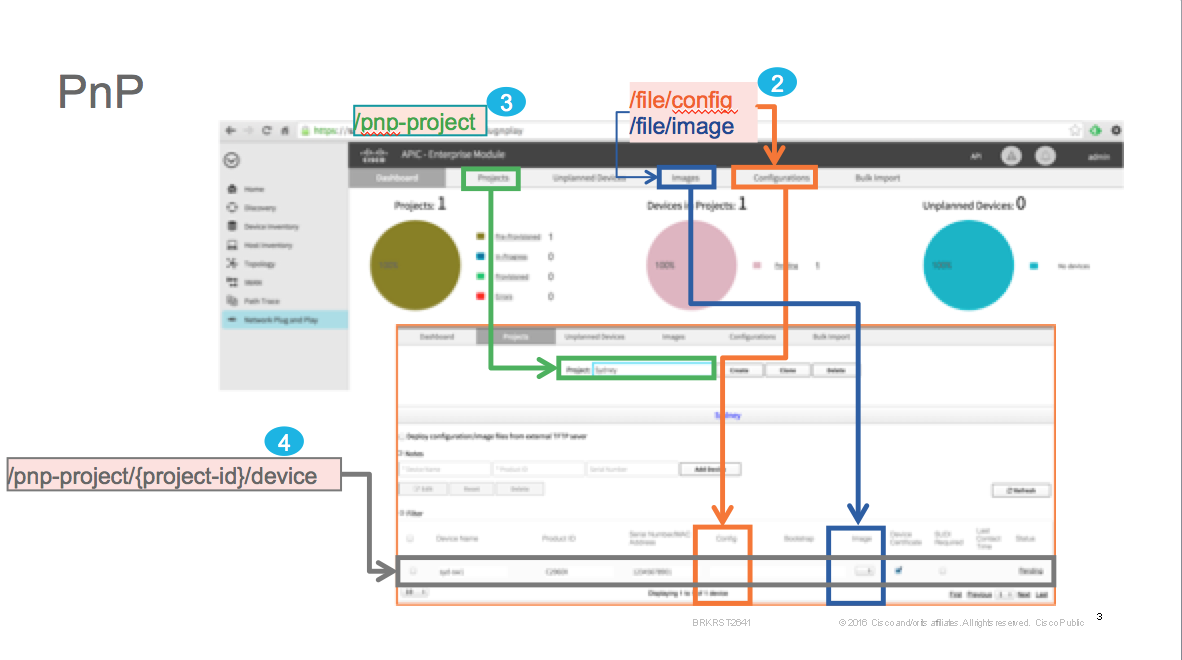 The next step is to upload the configuration files to the controller.  Unlike other API on APIC-EM, the file API are synchronous.  They return a response straight away.  Each file has a "id" associated with it. The "id" is used to refer to the file later on when it is assigned in a rule.

As mentioned earlier, filenames need to be unique.  To achieve this a user specific suffix has been appended.

This is also reflected in the response to the POST with the "namespace" attribute. Image files have a namespace of "image"

The next step is to create some projects (like folders on your laptop) to contain rules.

Project creation, like most API calls is asynchronous.  You have to poll a task to find out if the creation succeeded or not.

Again, there is a UUID ("id") associated with each project. This is in the

The final step is to create rules for the devices.  The information for rules comes from the inventory.csv file.  The "serialNumber", "platformId" and "site" are mandatory attributes in a rule.

The configuration we created earlier will also be added to this rule.  Software image files could optionally be treated in a similar way.

A different attribute (and obviously different file UUID) is required for a IOS software image file.:

This step is slightly more complex as there are API calls to lookup the UUID for projectname and filename. In a production implementation you would integrate the steps together for simplicity.

The complete output appears below.

This blog  shows how the PnP steps can be automated for greater efficiency. The next blog Network Automation with Plug and Play (PnP) – Part 3 will look at some more advanced topics such as embedded EEM scripts in the day zero configurations, using a client library (uniq) to make the code more efficient and integrating all of the components into a single tool.

In the meantime, if you would like to learn more about this, you could visit Cisco Devnet. DevNet has further explanations about this. In addition, we have a Github repository where you can get examples related to PnP.

Are there any roadmap for private APIC-EM implementation? like the customer can have their own APIc-EM and the devices are redirected to it instead of the cloud redirect to cisco?

this is supported today.  In the first part of blog series, i mentioned how you can use DHCP to provide either:

On some devices (routers) you can also use a USB key with a bootstrap config.  this is used when you need to first enable the interface to get onto the SP network

One thing i feel missed out in the article is how to obtain the software and licencing model. Can you ad the same?

Is there a way of automating the creation of hostnames? Meaning using them as a variable derived from the type of the equipment and the last 4 characters of the serial number for example, or something similar, instead of actually defining the hostnames one by one?

Thanks imanea, that is a great question.

yes that would be a simple modification of the script.   The scripts are just simple examples of what is possible.  They can be made much more powerful.

The derived hostname concept is a great idea.

Latest Contents
ERROR - Data is invalid according to the yang model.
Created by datavailops on 06-02-2020 08:19 AM
2
0
2
0
Hi there, I'm using the YDK docker image, so I'm assuming that the software versions are correct, but regardless of the code that I write I get the following bunch of errors:2020-06-02 15:05:58,515 - ydk - ERROR - Data is invalid according to the yan... view more
How to use "Site Map Service/Get image of the specified site...
Created by choywy on 06-02-2020 02:28 AM
0
0
0
0
Hi,I notice that starting from PI3.7 it has a new API "Site Map Service". I interested in saving all those floor map using this "Get image of the specified site map" API. I know how to parse a JSON output but this API return an image jpeg file!! How ... view more
How to use YDK docker image
Created by MadusankaBandara75644 on 06-02-2020 02:08 AM
2
0
2
0
Appreciate your help. How can i use ydk docker image to generate python code for my yang model? I'm a beginner. Is there any documentations to follow?
Using jumpssh to ssh into a remote network devices over a wi...
Created by pdn2020 on 05-31-2020 03:59 PM
5
0
5
0
Does anyone know if python jumpssh library works when the jumpbox is a windows? If you have a working implementation of jumpssh over a windows server jumpbox, I would love to hear your feedbacks and sharing. Do I have to install openssh on the windows jum... view more
get_top_entity_from_filter: Could not traverse from filter '...
Created by EricMonson on 05-28-2020 10:51 AM
1
0
1
0
I'm sorry if this has been answered somewhere. I've tried looking through the forums first and at the YDK documentation. I'm new to YANG/NETCONF, and I'm not sure if what I want to do is invalid, or if it's just the approach that I'm taking is wrong.&nbsp... view more
CreatePlease login to create content
Discussion
Blog
Document
Video
Idea
Related Content
Discussions
Blogs
Documents
Events
Videos
Ideas
Content for Community-Ad