Peer Gateway Feature on the Nexus 7000

What is peer gateway?

Peer gateway is a feature which was developed to support network devices which use non-standard layer 2 packet forwarding in a vPC environment.  This was first discovered by NetApp using the fastpath feature but other devices have started using this method as well over the years.

How exactly does this non-standard layer 2 forwarding work?

Here’s how a typical ping works from host to host in a vPC environment where the hosts are in different vlans: 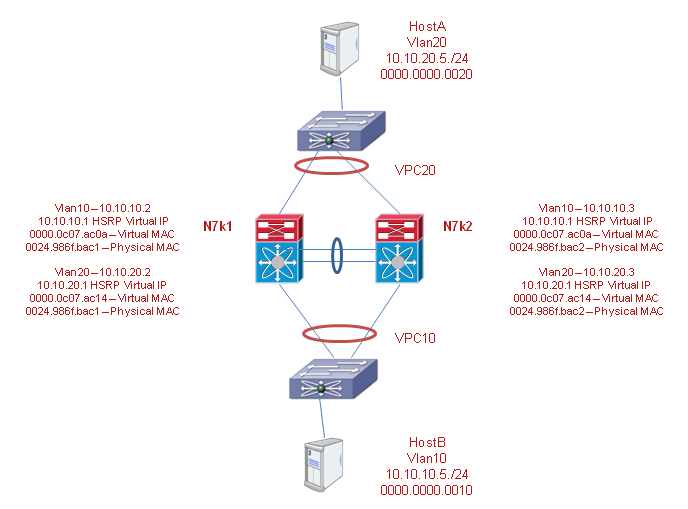 In this scenario when HostA pings HostB the packet flow is as follows:

Based upon port-channel load balancing it will hash to one N7k1 or N7k2.  For the purposes of this we will assume it hashes to N7k1.  N7k1 will then route the frame.  Here’s the frame HostB will receive:

HostB then responds with the following:

Again this will be subject to hashing.  For the purposes of this we will assume it hashes to N7k2.  N7k2 will route the frame and the frame HostA receives will look like this:

This is how it works with a properly behaving set of hosts and works as expected.

Again we will assume that the packet hashes to N7k1.  N7k1 does the routing and HostB receives this:

Now here’s where it gets different.  HostB replies with the following frame:

As you can see HostB has just flipped the source and destination MAC address.  Again this frame is subject to port-channel hashing.  If it hashes to N7k1 then everything is great and no issues.  If it hashes to N7k2 then the packet has to cross the peer link, and a special bit is set and it can’t leave N7k1 on a any port that is a member of a vPC.  This functionality is how loops are prevented on a VPC.

So how does Peer Gateway work?

What peer gateway does is allow the nexus switches to route frames which are destined to the mac address of their peer device.  In this way it works the same as HSRP in a vPC environment where both nexus switches forward the frames destined to either nexus’s physical mac addresses.  When enable it you will get output like this:

Note the G flag even though the mac address is learned on the peer link.  This means it will be treated like the HSRP virtual addresses and this switch will forward packets destined to that mac.  The only exception is if a packet is destined to both the physical mac of the peer and the physical ip address.  Under that circumstance the packet will be tunneled across the peer link.

Should I enable peer gateway?

If you don’t have any devices which behave in this fashion then you should not enable peer gateway.  It should also be noted that using peer gateway to get around the limitation of no peering routing protocols across vPC’s is not an officially supported design and can result in performance issues.

This is a really nice explanation about this option, but I still have one question, you said:

" If it hashes to N7k2 then the packet has to cross the peer link, and a special bit is set and it can’t leave N7k1 on a any port that is a member of a vPC"

Where is that bit at?

Cisco should not set a bit but vpc number. If packet come from one vpc it should have possibility to go to another vpc.

We have this problem with f5 big ip and netapp. After enabling peer-gateway problem solved.

Really good explination. I have few questions on the same.

If the Packet initally reaches to N7K2 rather than N7K during the ping request, in that case traffic will be fowarded to N7K1 and it crosses to PL then it will set the VSL bit.
After the packet reaches the N7K1 will that packet will forwarded to destination? if yes I have couple of questions here,

1. During the ping reply the packet has to reach back to N7K1 ? if yes then again it will get discarded due to VPC loop avaoidance.

2. If the packet chooses interface connecting to N7K2 will that get dropped at the Ingress? 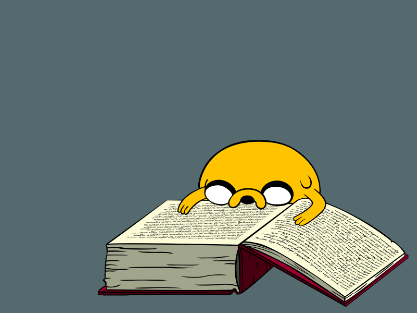 I think the DST_MAC should be the Virtual MAC ending in ac:0a and not ac:14 as we read in the blue box.

Latest Contents
Traffic Data (Exabytes/Mth) by Year, Country, and Applicatio...
Created by bike_gami on 07-14-2020 02:35 PM
0
0
0
0
I would like to request Traffic Data (Exabytes/Mth) by Country, Application Type (Video, Web, etc.), and Year. Similar to the country level VNI reports (ex:  India - 2021 Forecast Highlights) but in a consolidated format across countries. &... view more
One interface of my backup router isn't working correctly
Created by Darktortue on 07-14-2020 01:23 PM
2
0
2
0
Hello guys, first time I post something here but i'm confused.For class, i have a project which requires me to have, at some point, 2 routers. One "main" router and a backup one. I'm using HSRP. The problem is that on my backup router, one interface is wo... view more
NX-OS for Catalyst users ?
Created by jimmycher on 07-14-2020 12:52 PM
1
0
1
0
What is the NX-OS command for "Copy Run Flash" ?  Is there a file that explains how NX-OS is different from ios?  Thanks.
Ip SLA track for redundancy purposes
Created by Jefferson Amancio on 07-14-2020 11:43 AM
2
0
2
0
Hi, i am investigating some issues on an existing network topology and i have some questions related to the topology.Can someone please support me to understand the concept ? See below some informations: we have 2 catalystics routers connected f... view more
ccna loopback address
Created by daniel45793 on 07-14-2020 11:24 AM
1
0
1
0
hi  can someone explain to me  when will i use loopback address  and is there loopback address on switch or only on router  and if there is on a switch then when will i use it  thanks (:
CreatePlease login to create content
Discussion
Blog
Document
Video
Related Content
Discussions
Blogs
Events
Videos
Content for Community-Ad